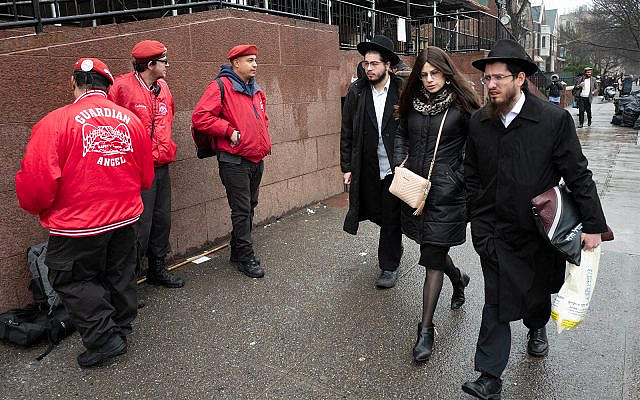 The Jews of New Jersey and New York are waiting.

We are waiting for someone to tell us when the attacks on our brethren will cease.

We are waiting for someone to tell us that there is a plan of action to respond to the frightening spike in hate crimes against us.

We are waiting to see increased security around our places of worship, our schools, our celebrations.

We are waiting for our senators, governors, congressmen, local representatives, and school boards to speak out on our behalf and do something – anything – to demonstrate that they grasp the severity of the crisis in our region.

We are waiting for deeds, not words.

We are waiting for the next attack and praying it is not in our own sacred spaces.

We are waiting to be targeted.

Jews of New Jersey, New York, and everywhere else facing this surge of antisemitic crimes and acts of hate not seen since the time of the Holocaust – it is time to stop waiting.

Our governmental leadership is silent.  All we hear echoing in the silence is their apathy and indifference to our plight.  We are not interested in pithy twitter comments written by a staffer and bolstered by no concrete actions.

Senator Corey Booker – where are you?  Are you so engrossed in your failing presidential campaign that you have no time to spare (beyond the time it takes for a low-level staffer to fire off a twitter comment) to take action on behalf of your constituents who are being shot and whose children are being targeted in Jersey City?

Senator Kirsten Gillibrand – where are you?  Are you so consumed with mourning your failed presidential bid that you cannot hear the cries of your constituents being stabbed, beaten, threatened, and hacked with machetes?

Senator Chuck Schumer – Thank you for presenting your plan to combat anti-Semitism yesterday, but where have you been?  Have you been so focused on impeachment that you did not have the time before the murder of innocent people celebrating their faith to present tangible measures to protect your fellow Jews of New York.  Most of these attacks are occurring in your own hometown of Brooklyn where people are living in fear as a result of daily acts of violence targeting them because of who they are, who you are?  Why did we have to wait for someone to attack us with a machete for you to see and act on an ongoing crisis?

Governor Cuomo and Governor Murphy – where are you?  Are you incapable of protecting enormous number of residents of your respective states who are expressing unwillingness to wearing clothing that identifies them as Jewish for fear of being attacked in broad daylight without consequence?

Our leadership has failed us.

When our leadership fails us in a democratic society, it signals the time for new leadership.  Fellow Jews – Let us remember this the next time we are at the polls.  These were the people who stood on watch while our lives were threatened with relative impunity.

As Rabbi Hillel stated so long ago, “If I am not for myself, then who will be for me?”  We need to vote with our safety and security in mind.  We need to press our current leaders and future candidates to show us what they will do to stem this tide of hate.  We need to run for office ourselves in greater numbers to replace an apathetic leadership that has shown little to no regard for our lives.

Fellow Jews – stop waiting.  Run for office and supplant the insensate leadership in New Jersey and New York.  Write articles and tell people what is happening in your community.  Go to the next Board of Education meeting in your town and raise your hand.  Fight for better education on the Holocaust and the legacy of intolerance.  Engage in interfaith dialogues and activities.  Don’t stuff your kippah in a drawer or quietly slip your Magen David necklace to the back of your jewelry box.  Wear them proudly and defiantly.  Don’t hide who you are.  Don’t wait for someone else to take these steps for you.  No one else is going to stand up for you if you don’t stand up for yourself.  Act now.

Because, as Hillel also taught, “If not now, when?”