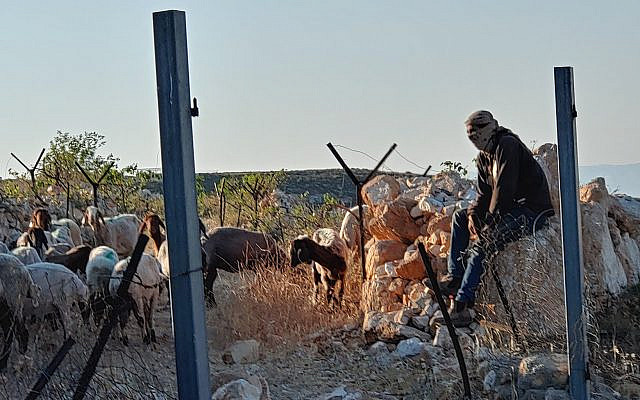 This week’s parasha (Matot. Numbers 30:2-32:42) is one of the most difficult in the entire Torah for those of us who believe in a God of justice and compassion who cares deeply for all humanity, and for the planet. It includes women’s lack of agency, vengeful massacre, looting, the taking of human booty and dispossession. It reminds us that if we have intellectual honesty, we cannot simply make the Torah into a book fashioned in our image by fiat. Parashat Matot supports the arguments of secular progressives who argue that it is not worth it to struggle to redeem the Torah, of believers who cannot accept that the Torah reflects God’s Will, and of the thousands who this week attempted to create new outposts to serve as bases for violence, dispossession, vandalism, and theft.

The leaders and participants in this intentional flouting even of Israeli law settlers see themselves as carrying out God’s Will. The settlers of the “shepherding outposts” no doubt see themselves as continuing in the tradition of the Israelites who take over lands for their cattle and sheep in our portion. They wanted us to be seduced by images of families and children doing their Zionist duty by pitching tents, singing, playing and studying Torah. All this week I published on social media samples of the thousands of pictures I have taken over the years showing the true face of the outposts. As if I needed a further proof, I woke up this morning to the message that trees belonging to the villagers of Turmos Aya had been cut down on their lands next to the Adei Ad and Geulat Tzion outposts, as well as many nearby “legal” settlements.

Those of us who believe in a God of justice and compassion, have the intellectual honesty not to excise portions of the Torah, and yet continue to cherish the Torah as an inspiration and guide in our lives, need to work really hard this week. If I did not truly believe in a God of justice and compassion, and if I didn’t experience that God both in my life and in the Torah, I might also be one of those who would decide that the effort is not worth it. Not only do I believe, but the events of this week are the proof that we cannot abandon the field to those exploit the simpler interpretations of our portion to lead masses of people to perpetrate injustice. While many of my friends find moral inspiration elsewhere, my faith demands that I challenge those desecrating God’s Name by harming fellow human beings in the name of Torah by challenging them in the name of Torah.

I believe that we can read Matot differently, if not comfortable. I cannot twist this parasha to reflect the God I believe in. That I can thankfully do in many other sections of the Torah. However, I can separate between what we are commanded to do, and what we have the choice not to do. I can distinguish between what must be taken as a guide for all time, and what can be seen as specific to a particular time and place.

I can remember that God challenges us by giving us the ability to choose.

Fathers and husbands have the option to nullify the vows of daughters and wives. They are not obligated to do so, and can choose to honor the agency of the women in their lives. We are sadly permitted to loot. However, elsewhere in the Bible looting is forbidden, and we certainly are not obligated to loot. There is no getting around the fact that throughout the Bible the Israelites are commanded to carry out massacres. It is also true that the Talmud teaches us that the commands to massacre specific peoples for specific sins are regarding peoples who no longer exist. We are not to extrapolate from the commands to dispossess and massacre to peoples of our day.

I would prefer that God did not give us the option to act in the ways that God permits and in some context bound situations, commands. I struggle to understand, am deeply distressed, and have no satisfactory explanation. However, I am also grateful for the fact that God gives us the option to grow, learn, develop, and choose differently. If this is apologetics, it is no more apologetics than those who explain away the commands not to oppress the non-Jews living among us, and to care for the non-Jew, the orphan and the widow.

Next week, another parasha.  And, in the second of the haftarot of warning before Tisha, B’Av, after preaching about the upcoming destruction stemming from our wrongdoings, Jeremiah says,

If you return to me,

If you remove your abominations from My Presence

And do not waver

And, swear, “as Adonai lives”

In truth , justice and righteousness—

Nations shall bless themselves by you,

And praise themselves by you.

Justice and righteousness are words that will come up again and again in the haftarot of warning, and in our readings for Tisha B’Av itself. They are the potential antidote to impending destruction.

Malbim teaches that “truth” refers to faith in intellectual principles, such as God’s Unity. Justice and righteousness refer to deeds. Justice refers to the interpersonal commandments – how we treat our fellow human beings. Righteousness refers to the ritual commandments – the relationship between us and God. The three bring a flow of blessing to all who incorporate them into their lives in both belief and action. Not only do we bring blessing to ourselves, but we become an inspiration to all humanity to bring these blessings into their lives.

I would also add that we not only inspire, but we bring blessing because we act in ways that bring good things to others.

We can choose a different path, the path of return to our truest and highest selves.

Our destiny is not to be a curse to the nations, but a blessing.

Ultimately, we can be a blessing both to ourselves and others, if we choose truth, justice and righteousness, and read the Torah through the prism of belief that this is what God desires of us.