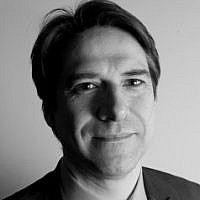 The Blogs
James Morris
Apply for a Blog
Please note that the posts on The Blogs are contributed by third parties. The opinions, facts and any media content in them are presented solely by the authors, and neither The Times of Israel nor its partners assume any responsibility for them. Please contact us in case of abuse. In case of abuse,
Report this post.

Prime Minister Cameron’s visit in Israel gives moment to reflect on one of the lesser known aspects of the flourishing bilateral relationship between Israel and the U.K.: cooperation in the cyber security sphere.

From low-level distributed denial-of-service (DDoS) attacks by hacktivist group Anonymous to advanced, multi-layered attacks by nation states and major crime organisations, Israel is no stranger to the threat of cyber-attacks. By some estimates, Israel is faced with as many as 1,000 cyber-attacks every minute.

The Jewish state has been compelled to adapt quickly to this new theatre of threats. And adapt it has; security technology giant McAfee ranks Israel as the world’s third most prepared country for cyber-attacks.

Israeli companies are counted among the world’s leading providers of cyber security technology to protect critical infrastructure – energy, water, telecommunications, and banks. Trusteer, a leading provider of endpoint financial cybercrime prevention solutions, used by nine of the top ten banks in the UK, was recently acquired by IBM for a reported $1 billion.

Exports by Israeli companies in the cyber field were estimated to stand at approximately $3 billion in 2013. By comparison, Israel’s exports are three times greater than the United Kingdom’s.

That British government and industry networks are facing sophisticated cyber espionage operations is not in question. According to figures provided by Cabinet Office Minister Francis Maude, 93% of Britain’s large corporations and 76% of small businesses reported a cyber breach in 2012.

There are many lessons the UK has already taken from Israel’s cyber security achievements.

The close cooperation between industry and academia in Israel’s cyber security scene has driven its success. The replication of this symbiosis is now enshrined in the Cabinet Office’s UK Cyber Security Strategy. The private sector has been encouraged to build upon the strengths of the UK’s skills base in cyber security with investment and the creation of centres of excellence to provide the cyber security skills we will need in the future. Through encouragement and support, the UK is nurturing not just a vibrant and innovative cyber security sector, but a shared sense of mission amongst the next generation of British engineers and computer science experts.

Israel’s intense clustering of high-tech companies has untold benefits. The emergence of the ‘Silicon Roundabout’ in London and the ‘Cyber Valley’ in Malvern, amongst others, suggest the lesson has been learnt but to ensure continued success the Government must facilitate and provide further incentives to develop centres of excellence and the leading high-tech and cyber clusters of the future.

Israel has taken clustering to new heights with the opening of the world’s first cyber security incubator in Be’er Sheva, in southern Israel. Cyber Labs aims to identify, nurture and build the next wave of cyber security and big data companies to emerge from Israel. Marrying government, business, and academia, the Government-backed Cyber Labs has been strategically developed adjacent to Israel’s renowned Ben Gurion University and a new Israel Defense Forces campus for military telecommunications. The creation of a similar epicentre of cyber innovation in the UK, with input from the Government and GCHQ, should be considered.

A less tangible Israeli asset that the UK would be wise to embrace is ‘chutzpah’. I would contend that the fearless approach of Israelis to new business enterprises has been one of the primary drivers of its successful innovation culture. In the UK there has been significant improvement in British entrepreneurial culture over the last twenty years but there is still a tendency to view business failure negatively. In Israel failure is used as a learning experience to springboard into a new and improved venture. We must continue to challenge this British psychology and encourage the promotion of original thinking.

In partnership, British and Israeli companies can pioneer groundbreaking cyber security solutions to the benefit of both nations. The UK-Israel Tech Hub launched by the British Ambassador to Israel, H.E. Matthew Gould, is already doing an exemplary job of promoting the UK as the European partner of choice for Israel’s burgeoning tech companies. With senior Government officials leading a near-continuous series of high-profile business delegations to the ‘Start-up Nation’ it is clear to see that the UK is keen to learn from Israel’s success.

There is no reason why the UK cannot, in time, become a global centre for cyber security. The ecosystem foreseen in the UK Cyber Security Strategy holds the key to unlocking and cultivating the UK’s cyber talent. Doing so is necessary to guarantee our national security in the digital age.

This article was originally published on Conservative Home.

About the Author
James Morris was elected as MP for Halesowen and Rowley Regis in May 2010 with a majority of 2,023. He was previously a successful small businessman specialising in computer software. In 2003 he founded Mind the Gap, an independent campaign to promote civic action and to encourage more grass roots involvement in politics. Prior to entering Parliament, James was the Chief Executive of the think tank Localis. James frequently speaks in Parliamentary debates on key issues such as foreign affairs, including Israel, and has a keen interest in cyber security.
Related Topics
Related Posts
Comments