We have enough grief this year, so mourning is canceled

Jews are now commemorating what is known as the Three Weeks.  It is when Jews express grief for the destruction of the Holy Temple in ancient Israel.  The Temple was breached by the Romans in 69 C.E.  The mourning period concludes with a fast to remember when both Holy Temples were set aflame.  Thus, Tisha B’Av (Ninth of Av) is the saddest day of the Jewish calendar.

Between the two fasts (the 17th of Tammuz which passed last week) and Tisha B’Av is called the three weeks of mourning. During this period, we don’t listen to live music (taped and the radio is ok according to some) eat meat or drink wine (except on Shabbat, when we are not to mourn), and reduce our joy.

Schachter is a halakhic (Jewish law) advisor for the Orthodox Union, and has rendered notable decisions in a number of contemporary topic areas.

Rav Schacter says in the pdf attached, that because of the trauma of the virus, the entire world is in a state of uncertainty and concern. He, therefore, says that if one needs to listen to live music so that they are not depressed, this year is different.

The Rav doesn’t say it, but I will, this obviously applies to the rest of the mourning procedures that Jews follow during the three week period. The world has suffered tremendously from the loss of their income and jobs to the loss of their freedom to travel freely. Even at home, the buses are not running at night, they pass you by in the heat if they have over 20 people (happened to me last week -after waiting 30 minutes in the heat for a bus in Safed, the bus passed me right by, with no concern that the next bus might be just as full). The world has changed this year and if we can’t go to our synagogues as usual, which is a big sacrifice, anyone who is suffering doesn’t have to suffer anymore.

As I wrote yesterday, One doesn’t have to be more religious than G-d. The Jews’ job is to follow the Bible as the Rabbis tell us what it means. Going to the hospital when you are hurt IS keeping Shabbat, and eating on a fast day, so that your resistance doesn’t drop when you are over 60 is keeping the three weeks.

It will be very strange for people who are in jeopardy (and the medical experts say that anyone over 60 is at much higher risk as well as younger people with pre-existing conditions) to skip the fast of Tisha B’Av this year, but they must to protect their health. Someone can be machmir (strict) on something that doesn’t affect their health, like reading more Tehillim or doing more prayers, but if they put themselves at risk by reducing their resistance, they are breaking the Torah not keeping it.

It was for this reason, even on Yom Kippur, which is not a rabbinic fast but a biblical one, Rabbi Salanter CANCELED YOM KIPPUR FAST.

Now let us turn to the current issue, not just of health, but of an epidemic condition (Bibi has told us enough times in the Paper that this is an epidemic Condition-good enough for me).

Following Shacharit on Yom Kippur of 5610, in September 1849, Rabbi Yisrael Salanter, the famous and pious Vilna rabbi -founder of the Mussar Movement, dedicated to injecting the pursuit of ethical excellence into traditional Jewish observance, ascended to the bimah of the Vilna synagogue.

He explained to the congregation that because of the raging cholera epidemic in Vilna, they must not spend the day gathered together in the synagogue, but should leave the building and walk outside. Fresh air was believed to prevent the spread of the disease. (My oh My nothing seems to have changed-same advice today!)

Furthermore, he said, it was imperative that everyone maintains their strength so that they would not fall, victim, to disease. And so, on that Yom Kippur, Rabbi Yisrael Salanter explained, everyone should break they’re fast, eat and drink so that they could protect their health and survive the disease.

Cholera is a horrific disease. It is painful, terrifying, and deadly. The Hebrew word for cholera- רעחולי sounds similar to “cholera” but more literally can be translated as “evil disease.”

Over the course of the 19th century, modern medical science learned how to prevent the spread of cholera, and also how to effectively treat cholera. We don’t yet know how to treat the coronavirus, but we do know that people with preexisting conditions or being over 60 makes them at higher risk.

Now, when a person doesn’t fast on a fast day, they are supposed to eat and drink in private and not celebrate. This year if you are over 60 or have pre-existing conditions, you don’t have to apologize if you are eating, but it is still better to it in the privacy of your home, to respect those that are fasting. 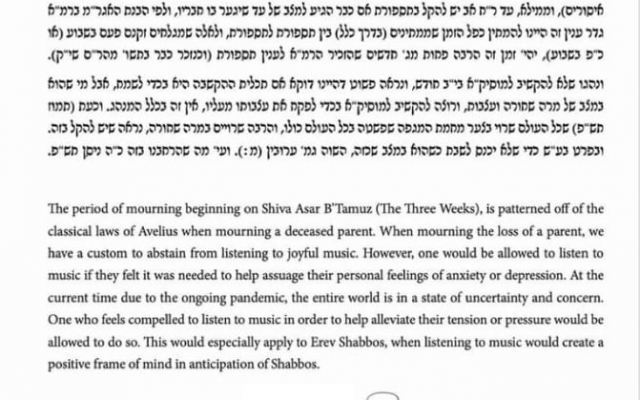 Miriam Feinstein decided to take up meditating and she was always preaching its benefits to her husband Moishe. That’s why when he suddenly started asking some questions about it, seemingly expressing interest, she got excited that they could share this experience together.

“You don’t have to close your eyes, Moishe,” Miriam explained. “You can keep them open and focus on something like a candle or a spot in front of you.”

Moishe nodded thoughtfully. “Could it be a TV?”