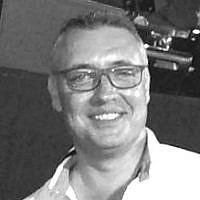 The Blogs
Koby Gould
Apply for a Blog
Advertisement
Please note that the posts on The Blogs are contributed by third parties. The opinions, facts and any media content in them are presented solely by the authors, and neither The Times of Israel nor its partners assume any responsibility for them. Please contact us in case of abuse. In case of abuse,
Report this post.

I watched a video on You Tube this morning: a Palestinian mother whose child had just received free treatment for a heart condition in an Israeli hospital. The mother was grateful but also expressed the pride she’d feel if her son was to grow up to be a martyr, to kill Jews (video follows but it takes a few seconds to appear):

This Palestinian mother's son was treated, free of charge, for his heart problem in an Israeli hospital. Watch as she acknowledges the kindness Israel has for Arabs, and continues on, in the same hospital, to explain why becoming a "martyr" is so important for Jerusalem."Peace will come when the Arabs will love their children more than they hate us." – Golda Meir

Posted by StandWithUs on Thursday, 4 December 2014

my eyes filled with tears watching this, it’s tragic, heartbreaking and beyond depressing. She is a victim, she has been destroyed by her environment. All this ‘them and us’!! I’ll be verbally abused by people for saying this but we have to personalise and humanise what’s going on, we have to listen more to what these people are saying, we have to get through to them at heart level..heck, love must be stronger than hate…I feel desperately sorry for her…her life has been taken away from her by Palestinian leaders, by elders in her community, by her own family, she has been mentally destroyed and mentally abused since she was born, her humanity has been removed..99% of it…look at her, listen to her, there’s some residual sense of humanity in there…she is struggling to express what she says she feels, she’s a bit uncomfortable saying it, a bit embarrassed, and that can only be because she’s struggling to believe what she’s saying, because she knows, just a bit, but she knows that she is saying bad things to a good person…there’s a good v evil battle going on there…ultimately, we have to get through to people like her, we have to keep trying, love is the only way we’ll get through to people like her. She is relieved that her child has had the heart treatment, she is crying, she DOES love her child…there is something there!

Of course we have to be strong and defend ourselves, she is dangerous and she wants us dead but we must follow a twin track, we have to scream our love and compassion louder than their leaders and elders scream hate…if we give in and the spiral continues, no one will win, no one will be left….they only think about what’s good for them, we have to think, or at least I’m determined to keep thinking, about what’s good for ALL of us…of course, in an “it’s them or us” war, I defend my family and home, my countrymen/persons, my country, but I’m not throwing the towel in yet.

If, as a result of watching this, I move to the right, I’ve been beaten, I’ve given in and given up, I’m a victim, it’s over…this video moves me leftwards, back to the centre…in some ways and on some levels, it moves me left of centre…right wing means defeatism and, to the far right, hate…..left wing might mean, at times, naivety but it also reflects hope and love for ALL, a desire/need to get through the evil to reach hearts, to avoid the destruction of ALL of us (which is what evil wants!!!)

“Peace will come when the Arabs will love their children more than they hate us.” – Golda Meir

If you are rude and disrespectful, I’m not getting into an argument  –  I haven’t insulted anyone, this isn’t a personal attack on ‘Likudnicks’ or ‘Bennettites’, think before you respond…Shabbat shalom x