During our recent shul trip to Israel, we tried to offer options so first-timers and people who had visited many times could have an experience that was more tailored to each of them. One day, some of our group went to Leket where they picked fruit for the hungry and then they enjoyed some time at Kfar Kedem.

Kfar Kedem recreates life in Israel 2,000 years ago during the time of the Mishnah. Our group was able to dress up in the latest fashion of those times and enjoyed activities like donkey races. 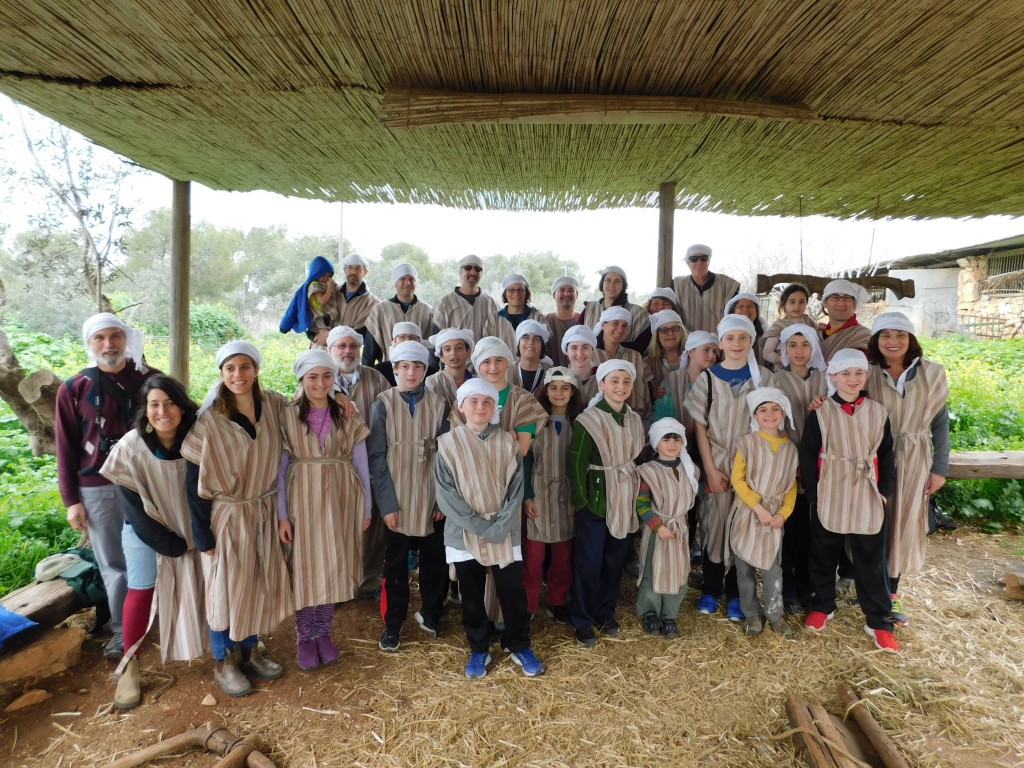 At the “Bread Basket,” Emunah-ites had the opportunity to sow seeds, work in the wheat fields, grind the harvest by stone, and bake pita bread on the walls of a traditional oven of the type used in ancient times.

The flat, soft, and quite tasty bread is made fairly quickly on the metal cover on top of a fire. Listening to today’s maftir about the Israelites hurrying out of Egypt, I realized the similarities to the Kfar Kedem. The Torah said the Paschal sacrifice was to be eaten quickly with our loins girded, standing, our sandals on (usually, people ate seated with their shoes off). 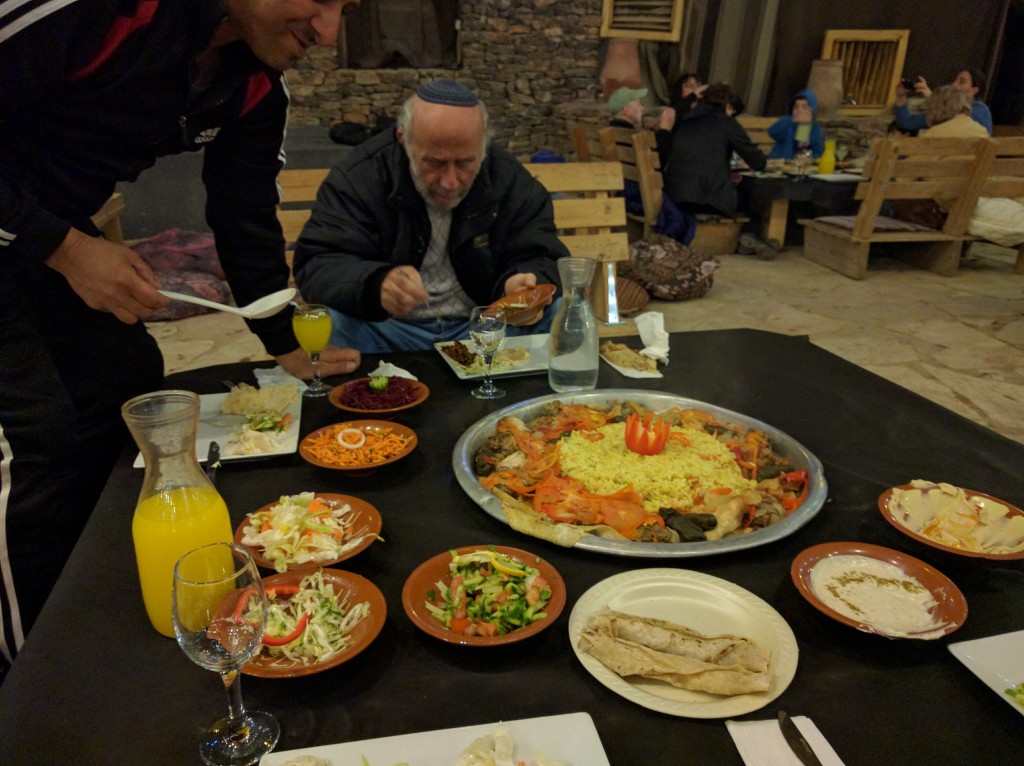 They wore a “flowing shirt-like garment tightened by a sash wrapped around their waists.” (Exodus 12)

And then the food itself – the bread was like a large pita without a pocket – today it is sold in Israel as eish tanur bread – or “fire oven bread.” It is very good. How that evolved into today’s crunchy, bland matzah is a sad sermon for another day, but it is fairly evident that they ate the Pesah – the Paschal lamb sacrifice, which was a delicious lamb in a spicy – harif, sharp sauce (that was the maror – the bitter herbs) wrapped in the flat, hastily made unleavened bread called matzah, but much better than our matzah. 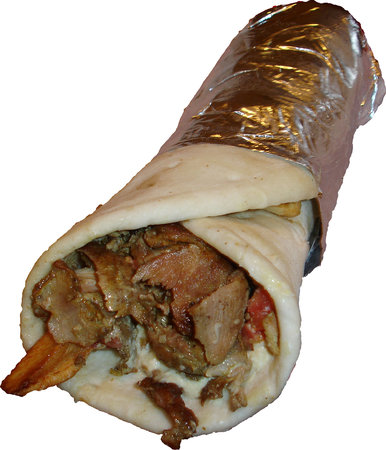 If you want to get a taste of it, go to Rami’s or Jerusalem Grill in Brookline which sometimes has real lamb schwarma and ask for it harif – spicy in eish tanur bread.

And after they ate, the Israelites ran out of Egypt. They were scared. Even though they endured backbreaking hardships as slaves, they did not know what the future held. But they had each other. And they travelled late into the night, which is why to this day, we stay up late at the seder…. 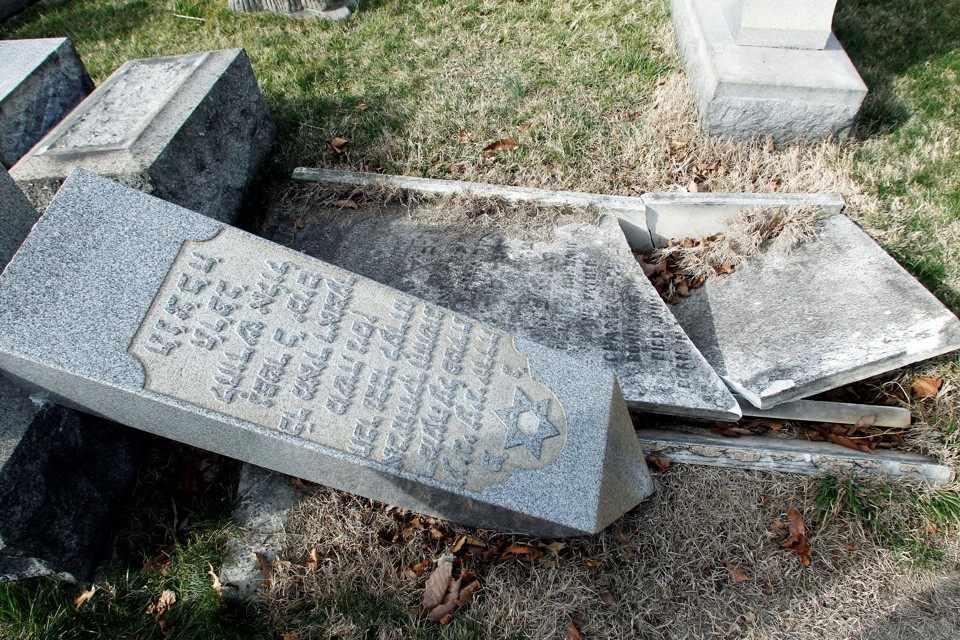 I have been thinking about the original seder, the Exodus itself this week and realize that it holds lessons for us in this moment. We, too, are in an uncertain time. There is some fear and uncertainty about the future. Many Jewish communities have received threats and although the main perpetrator seems to be an Israeli who was arrested on Thursday, it has led to much anxiety. The desecration of Jewish cemeteries remains unsolved, a disturbing act of hate.

We as a community will have the chance to share our feelings about our own security and the precautions we are taking at tomorrow’s Congregational Meeting.

However, the most important feeling that helps overcome fear is not feeling alone. There were two moments this week when I felt how blessed we are to be living in this community at this time. The first occurred at the Lexington Interfaith Clergy Association – both Rabbi Fel and I try to attend these monthly meetings where the clergy and leaders of the local Jewish, Christian, Hindu, and Muslim communities come together. 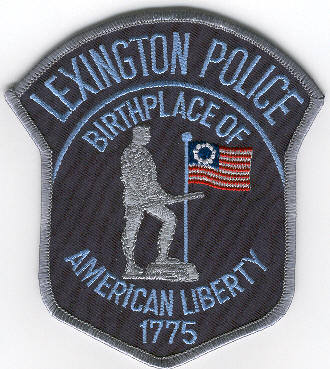 This month, Police Chief Corr joined us to discuss how the Lexington Police Department is handling both issues of security and the issue of if we should be a “Sanctuary City” for undocumented immigrants.

While he shared that the police feel that the term “Sanctuary City” is being used by some as a critique of the police; here in Lexington, it is not. The police here do an amazing job both of protecting us and working with the various communities and ethnicities that make up this diverse area.

We asked Chief Corr about requests from the Immigration and Naturalization Services and he could only recall one instance over many years of being chief. The INS has just recently asked him about using the Lexington Police Department jail for potential overflow needs. He replied in no uncertain terms “that will never happen.”

Instead, he wants the police to continue to reach out to different immigrant groups in our area so they feel comfortable reporting crime. When people are afraid because they are from minority populations or immigrants – legal immigrants or undocumented – they are much less likely to report crimes such as home burglaries that have plagued the homes of Indian families, domestic violence, human trafficking and prostitution, which is on the rise in our area, or like the family that was the victim of banana peels being tossed on their lawn for a long time before they finally reported anything.

Chief Corr stated clearly “the mission of the INS is not our mission.” We were most comforted by his words and then he added a story. His father was the police chief from 1965-1982 and he remembered how people of different backgrounds would come together back then as they do today. And then he retold how every Christmas, the Michelson family, who are members of Temple Emunah and own Michelson’s Shoes in town, would come over and bring presents to his family and share some

After the meeting, I opened my email to see that the non-Jewish clergy in town had started an email chain to organize a meeting so they could write a statement of support to the Jewish community in light of anti-Semitic incidents and threats. Just reading that email moved me to tears.

What great friends we have in the world today!

So far, the answer has been yes – the Muslim community sent me a letter standing with the Jewish community in the light of recent events.

The relationships we are cultivating with the Muslim community are incredibly important and the Boston Globe highlighted them in a front page article in yesterday’s paper.

Rabbi Abraham Joshua Heschel was once asked about why he was expending so much energy in developing a strong relationship with the Christian community and he replied that developing those friendships is vital and creates a reality that is so different than pre-Holocaust Europe when the Jews did not have anyone to call on for help.

That is not to say there are not challenges in this work; there are and they come from outside groups and from those in the Jewish community who are actively trying to tear down the bridges we are trying to build. There may be disagreements about the Israeli-Palestinian conflict as well

How excited I was to learn that my son, a seventh grader at JCDS, went on a visit to the Mosque in Roxbury; we hope to have similar opportunities for our Emunah family next year.

On Thursday night, I attended the Jewish Labor Committee’s Labor Seder and was seating with religious leaders of different faiths – it was very powerful to see us working together to protect workers, especially those on the fringes who make so little and are so vulnerable. 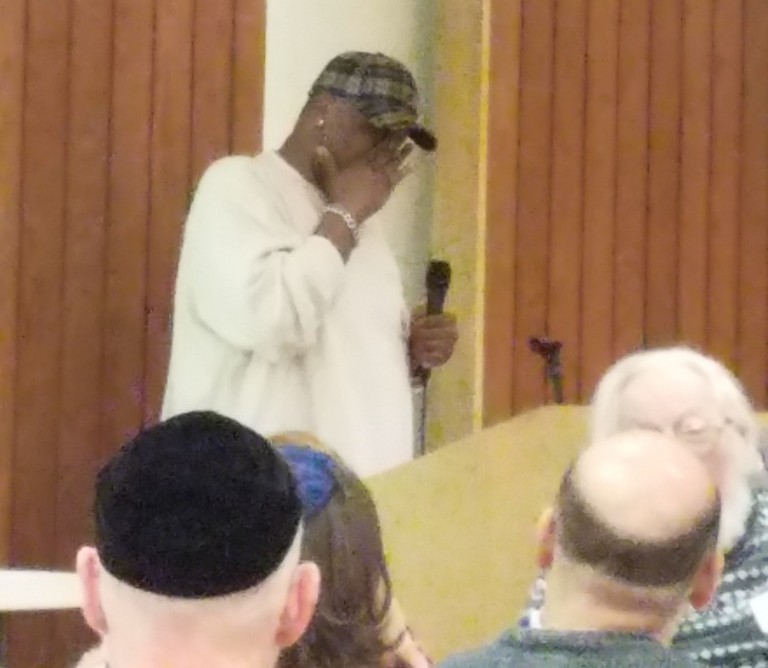 One African-American, named Gene, who works at the Harvard Dining Services, spoke emotionally about having the courage to go on strike to demand a living wage from a school with a $37 billion endowment. He got choked up and had to stop and then he turned to us, to a group of people who were mostly white, mostly Jewish, from very different backgrounds and socioeconomic places and thanked us for standing with him. He said that we gave him the courage to stop working for weeks and take a huge risk, since his entire livelihood was on the line.

In the end it paid off, as he and his fellow workers received what they asked for and more.

He said that he knew that “we – the Jewish community – had his back.” We have your back. Many others in the world today need their backs protected.

There are two ways of being in the world – the way most of us have been for a while – informed, but not engaged. We listen to the news on CNN, WBZ or WBUR and that is being informed, but then there is being engaged and taking action.

It’s time to do more: sign more petitions, attend rallies, donate more, get active! Come and participate more and more in the life of the community.

That is what the seder is all about – propelling us to act – the entire seder experience utilizes actions to truly make the narrative real.

And the story teaches us about becoming free so that we can remember what it might be like to be a slave, an outsider, someone who is on the margins.

Today, that might be someone from the LGBTQ community, an immigrant, a Muslim who is afraid to wear her hijab, a Jew fearful of donning his kippah, the poor who have so little, a worker struggling to pay the rent, someone who is afraid of losing her health care or maternity coverage.

Let us all stand together and remember the line that opens the seder: “Kol Dikhfin Yetei V’yekhol – let all who are hungry come and eat.”

That is a call to action!

We can fulfill this at the seder by Hakhnasat Orhim – inviting people to our seders.

But beyond our community, let us make sure that all who are hungry can eat.

And don’t just be informed, be engaged.

Having access to food or to medical coverage is not the same as having the resources to get them.

Let us stand together and have each other’s backs, building the bridges that will give us the strength to move forward without fear, but with courage.