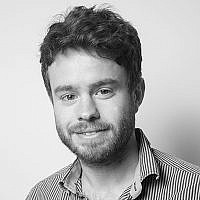 The Blogs
Dror Markus
Apply for a Blog
Advertisement
Please note that the posts on The Blogs are contributed by third parties. The opinions, facts and any media content in them are presented solely by the authors, and neither The Times of Israel nor its partners assume any responsibility for them. Please contact us in case of abuse. In case of abuse,
Report this post.

The timing screams out at us Israelis. On the week of Yom Hashoah, our annual day of remembrance of the greatest tragedy and crime against the Jewish people, the Syrian regime again kills its own citizens with horrific and illegal chemical weapons. My computer screen alights with the cacophony of politicians, celebrities, pundits, family and friends deploring the latest atrocities in Syria with a blaring question: Has the world not learned from the past? Has the oft-repeated proclamation of ‘Never Again’ become a meaningless mantra? While this discourse is not new, we must realize that — now, in the case of the chemical-induced mass-murder of innocents in Syria — it is us — the Israeli people — that are to blame. We are responsible for turning ‘Never Again’ into empty words, thereby hammering the final nail into the coffin of global collective responsibility we cried for in the wake of the Holocaust.

In Israel, we greet the horrific images from Syria from our traditional position as a minnow of a state, sidelined by the world’s great powers. Stronger nations are supposed to take action and solve international crises. In the past, this attitude has been justified as well as comfortable. Israel is in no real position to react to situations arising in distant continents. Thus, we could watch from our living rooms as our politicians decry far-off crimes from the Knesset podium. We have been all too happy in this role — a nation rising out of the ashes of the history’s greatest genocide, (supposedly) acting as the global moral voice.

However, the latest killings in Syria smash this conception. Let’s face it: Assad’s forces are bombing civilians only tens of kilometers from our border. Our mighty air force is one of the few to engage in what is becoming regular bombing sorties over the Syrian skies. Our intelligence agencies are watching and studying Syrian WMD programs with due diligence. I doubt there are many other countries around the world who are in as strong a position to intervene effectively as we are. We have been repeatedly asking the legitimate and sincere question of why the Allied powers didn’t bomb the trains to Auschwitz. We must now ask this question of ourselves. We know that our national defense agencies are tracking the weapon movement in Syria (as seen by our bombing of convoys to Hezbollah). Can’t we spare a couple of missiles for Assad’s chemical depots and planes?

I don’t know the answer to this question. Israel acting solo against Assad’s forces would complicate our delicate position in this crazy region. We might find ourselves in an escalated confrontation with Assad, Hezbollah, Iran and even Russia. We might not be able to count on the meek European countries or the increasingly erratic U.S. administration to back us up. Our civilians could pay a huge price if retaliated on by missiles and rockets. Our military could find itself entrenched in a messy conflict. Any decision to deal with Assad must be made after comprehensive analysis and calculation by those who better understand our capabilities and options. We have many sound, logical reasons not to intervene. But so did the Allies.

About the Author
Dror Markus, a former 'lone soldier and officer in the IDF, is finishing his Master's thesis in Political Science, studying Information and Government. He has worked with Jerusalem Center for Genocide Prevention and is an avid fan of the Israeli national soccer team.
Related Topics
Related Posts
Dror Markus
Comments