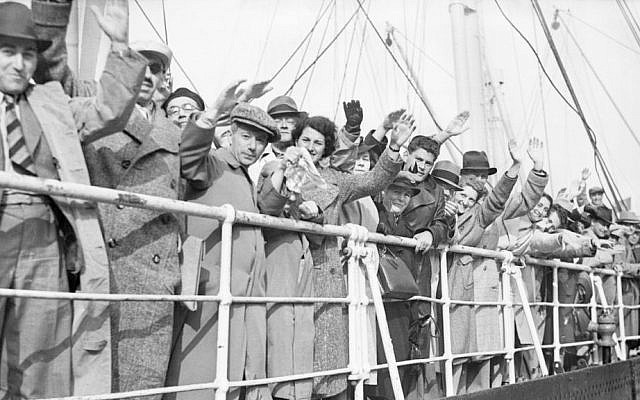 This year marks the 75th anniversary of the roundup of 13,000 Jews — including 4,000 children — who were herded into a Paris bicycle racing stadium and transported by rail to their ultimate fate in Auschwitz. In what Vichy authorities considered a humane act, they kept the children with their parents. This was the culmination of a three-year program that began before the German occupation with the internment of Jewish refugees fleeing Nazi persecution in detention camps scattered throughout France such as Drancy. Designated as stateless citizens, they could not obtain working papers and were considered a burden on the state. Without rights under French law, when apprehended, they had no recourse. When the Nazis marched in, overtaking their prey, the Jewish refugees were already conveniently behind barbed wire, courtesy of the French.

The difference between the internments and the Paris roundups was that by July 1942, the Vichy authorities had no illusion about the ultimate destination of their victims. They were participating in mass murder. Ultimately, 75,000 French Jews were sent to the death camps, 80 percent of them refugees from the East, targeted not only as Jews, but as unwanted foreigners, the illegal aliens of their day. While the massacres in Eastern Europe rivet our attention in their sheer number and wantonness, the French roundups are particularly instructive in that they occurred in a “civilized” democratic state. The Jews were rounded up in daytime in the City of Light without their fellow Parisians batting an eyelash. And it was all legal. It was the Jews who were illegal. Their crime was being non-Aryans who’d had the temerity to violate French soil.

A little over two decades earlier, roughly 100,000 Jews were slaughtered in pogroms by White Army forces during the Russian Civil War. Thousands more were murdered in anti-Semitic outbreaks that followed the turmoil in Eastern and Central Europe after the end of World War I. Marked by revolution, revanchism, nationalist strife and political chaos, the violence left 4 million dead — most of them civilians — in the years “of peace” between 1919 and 1923. This does not count the many maimed, terrorized and displaced.

Some of the remnants of these shattered Jewish communities headed west over the porous borders of chaotic blood lands, flooding into Western Europe where they, or their children, would later become the first victims of the conquering German armies that overran the continent. But thousands of others attempted to flee farther, to America, the haven of the oppressed. They, however, were met with a wall of hostility. For it was at this moment that the US Congress, in thrall to a racialist tide of nativism, passed the Immigration Acts of 1921 and 1924 severely curtailing immigration from Eastern and Southern Europe, effectively barring the very Jews who most needed refuge from the threat of anti-Semitic violence in their native lands. While much has rightly been made of America’s refusal to admit Jewish refugees in the late 1930s, the laws justifying this were already in force in the early 1920s and were used at the time to keep out a flood of Jews fleeing mass murder. America’s refusal to provide succor for this desperate exodus was a precursor to its later exclusionist policies that had even more fatal consequences.

The two phenomena cited here — expulsion and exclusion — are opposite sides of the same coin that have caused untold misery to millions in the last hundred years alone, not least to the Jews. One would think that given the history of the recent past the words “deportation” and “roundups” would send a chill through any decent human being and hold particular resonance for any member of the Jewish community. When Donald Trump threatens to throw undocumented immigrants “the hell out of the country,” he is channeling the same nativist impulses that fueled anti-Semites in the centuries of Jewish expulsions from lands where they’d sojourned: Create an issue: jobs, religion, subversion, nationality, treason. Find a scapegoat: The Jews, the Chinese, the Japanese, the Mexicans, the Muslims. Incite the populace. Issue an edict.

The fact that American Jews are for the moment insulated from Trump’s decree directed at the Latin American and Islamic communities does not exempt us from identifying with people under duress and speaking out against a biased process that has so often been used against us. To send children back to the towns in Central America from which they fled for their lives is little better than a death sentence. What, after all, is the difference between a Honduran teenager who left a violence-prone village for a chance at life in America and a Jewish girl from the Ukrainian Pale who escaped the White Terror?

A Russian woman who immigrated here during the Jewish influx of the 1970s told me recently that she supported Trump’s deportation enforcement, asserting that she’d arrived here legally while the immigrants he targeted had not. She seemed oblivious to the fact that she was here because of the political pressure exerted by American Jews in fostering the Jackson-Vanik Agreement of 1975 that enabled thousands of Russian Jews to emigrate. Similarly, the immigrants who fled Communist regimes in Hungary in 1956 and Cuba the following decade were refugees whose admission bolstered the cold war agenda of our Government. Had it not been for political contingency, their fate might have been different. It is no reason for sanctimony about the present plight of undocumented immigrants who have sunk deep roots in America and are leading productive lives. Donald Trump’s current fiat redefines criminality of illegals so broadly that it can be interpreted to include any undocumented immigrant within its purview.

This writer’s mother was an illegal immigrant. As a teenage girl, she fled the violence of the Russian Civil War and its aftershocks — itself a wrenching experience that forced her to leave her family — and made her way across a ravaged Ukraine, stealing across the frontier, slipping into Romania where she was hidden in a safe house through a de facto underground railroad under the aegis of HIAS. It was an arduous and circuitous journey. Had she been apprehended, my mother would have been sent back across the border to a baleful fate. She managed to obtain passage from the Romanian port of Constanta to Halifax in Canada. The gates to America had already closed to thousands like her because of the immigration quotas of 1921, so she made her way across Canada, slipping over the US border from Windsor, Ontario. I remember as a child her nightmares of the “Nyikentzas” whom I later learned were the White Russian Army under General Denikin, who ravaged the Ukraine and had pillaged her town in a pogrom.

I also recall as a young boy annually filling out an alien registration form for my mother. The idea that she was an alien who could somehow be deported filled me with dread. Although she was married to my father, an American citizen who’d been naturalized in the Army during World War I, and was in all probability no target for deportation, I was still frightened of the possibility. I can only imagine the actual terror of a child of illegal immigrants today at such a very real prospect. The uncertainty is the worst torment, the constant dread of coming home to find a parent gone. To impose this in the name of bogus border sanctity is no less than an act of calculated cruelty. That it is abetted by prejudice and enabled by indifference makes it all the more odious. It speaks to a dark underside of America. It is disturbing that nativists, fighting a rearguard action against demography, have embraced roundups and exclusion as a solution to our country’s social and economic ills. That they’ve been joined by Rightists who call themselves Jews, is shameful.