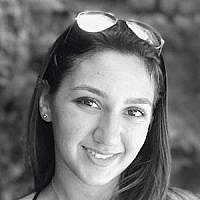 The Blogs
Michelle Elovic
Apply for a Blog
Please note that the posts on The Blogs are contributed by third parties. The opinions, facts and any media content in them are presented solely by the authors, and neither The Times of Israel nor its partners assume any responsibility for them. Please contact us in case of abuse. In case of abuse,
Report this post.

President Trump and many fellow Americans believe the 2015 Iran deal can be considered one of the worst deals. President Trump positioned himself in believing the deal should be fixed since the deal consisted of weak inspections in exchange for no more a short-term and temporary delay in Iran’s path to nuclear weapons.

He believed the deal was bad because the Iranian regime received an immediate financial boost and over $100 billion dollars its government could use to fund terrorism. The regime also received a massive cash settlement of $1.7 billion from the United States and a large portion was loaded onto an airplane and flown into Iran.

Worst of all, the deal allows Iran to continue developing certain elements of its nuclear program. Most importantly, in just a few years and restrictions start to disappear Iran can sprint rapidly into breaking out nuclear weapons.

President Trump also believed the deal was bad because all the money was paid up front rather at the end when they would’ve shown they played by the rules.

However, there are people who are in favor of the deal. They believe that the deal helps prolong the ability of Iran to become nuclear. This side of the argument uses facts to claim why they are correct. For example, they use the confirmation from the IAEA that Iran has complied with the deal’s restriction and has dismantled thousands of centrifuges. This moves Iran further away from building a bomb and becoming like North Korea.

They also argue that Iran a part of the deal was that Iran doesn’t have to allow inspections of military sights.

Another view on this deal is against the decertifying of the deal. One argument used is how the decertification will damage the credibility of the United States among the world’s nations that was partially restored by the Obama administration after the Iraq war. They also argue that Iran is in “technical compliance” with the deal and that is all we can demand or expect. It doesn’t matter if the White House insists Iran pursues other policies that we dislike because at the bargaining table everything was based on the exclusion of all extraneous issues from the deal.

Also, if the deal is decertified this could lead to the prospect of war with Iran and Iran possesses a large, competent and heavily armed military force. Any conflict would threaten to escalate into a broad regional conflict with millions of casualties and destruction.

I am in favor of the decertification of the Iran deal. For starters, the US did not receive anything but weak inspections in exchange for a temporary delay of having a nuclear Iran. I also realized that this deal was bad, to begin with when the money was given at the beginning at the deal rather at the end when Iran would follow all the rules. In my opinion, the deal could be fixed and put back in replace of the current deal. I was able to reach my opinion on this deal by realizing all the negatives that the current deal has and how we can change that if we consider a new deal.

About the Author
Raised in Miami, Florida, the author has been actively involved in learning and advocating for the State of Israel.
Comments
Advertisement