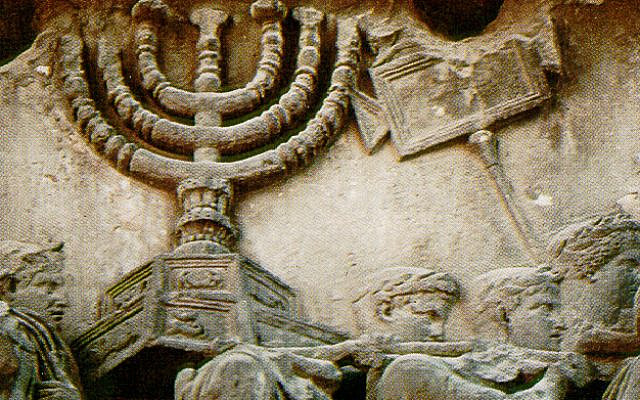 Roman soldiers carrying off the Hasmonean Menorah, as depicted on Titus' arch

One of the tragedies of Hanukkah is what a short-lived victory it was. After a two decade rebellion that pushed the Seleucids out of the Land of Israel in 142 BCE, only a few generations passed before Israel was once again captured by imperial powers, culminating in the destruction of our Temple and exile from our Home.

Now, in our 74th year of independence as a reborn sovereign Israel, uncontested science is warning us that all that we fought for, all we bled for, all that our loved ones sacrificed for, may come to an end before our 150th Independence Day. Because even if humanity abides by the most updated international pollution commitments, the local rise in temperatures in the Middle East will still be catastrophic as high temperatures become serial killers; not many of our best and brightest will raise their families here if going outside is a death sentence. If we want the State of Israel to outlast the Hasmonean Israel’s record of independence, we will need to take our destiny into our own hands and become the miracle the world needs to avoid climate cataclysm.

If we want the State of Israel to outlast the Hasmonean Israel’s record of independence, we will need to take our destiny into our own hands and become the miracle the world needs

It is easy to confuse the historical events of Hanukkah with the story we tell our children. In the story we tell, the Maccabees were aided by the Eternal to fight off the Hellenists and reclaim our independence in the Land of Israel. Often, the story stops at the recapture of the Temple and its dedication (from which we derive the name for the holiday, Hanukkah), and does not continue through the battles and bloodshed that established independence. Rarely does the story include the civil struggle between Hellenized Hebrews and the national traditionalists backing the Hasmonean revival. Almost never do we speak about the normal folks, the everyday people who lived through the chaotic period, and what they had to do on a day-by-day basis to contend with decades of upheaval and to work towards the future they dreamed of for themselves and their children.

We owe it to ourselves this Hanukkah to remember this more complex version of the story of independence. Alongside the beautiful tradition of lighting a growing light against an oppressive darkness, we need to acknowledge the reality of struggle: while one candle may dimly light a room, the holiday is not complete, the Menorah not fully lit, our independence not truly won, until all of the candles shine together.

As during those first days of the Hanukkah rebellion, too few of us fully grasp how deeply in trouble we are. Too few of us are standing up against encroaching darkness. Centuries of industrialization have brought humanity to this moment in which our greatest strengths have become our greatest weaknesses. The same optimism of capitalist innovation that lifted billions out of abject poverty has now written a death sentence for billions by its unintended externalities.

It is true that scientific predictions about the implications of a hotter future come with a measure of uncertainty. It is true that the particularities of what will happen to our little corner of the world and its habitability are open for interpretation. What is certain, though, is that despite national pledges since the Paris convention, global carbon emissions have continued their rise. Despite a slight pandemic lull in emissions in 2020, we increased global carbon emissions in 2021, shortening our lifeline further even as knowledge of climate collapse becomes uncontested.

What would a Maccabee do? I would think they’d fight for our future, beginning with a call to enlighten our fellow global citizens about the perils ahead. I would imagine they would enlist the masses in defending our mutually cherished independence. They would tell us that, against unimaginable odds, we need to wage an inspired campaign, to present a vision for an alternative future that we work towards steadily, day by day.

What would a Maccabee do? I would think they’d fight for our future, beginning with a call to enlighten our fellow global citizens about the perils ahead

Just as the Maccabees did not wait for a miracle to happen to them, neither can we wait for the invisible hand to grow alternative energy technologies when so much capital is invested in the maximization of profits going to so few hands. We are caught in a trap of our own making. Future historians will look back on this moment and either celebrate our ability to overcome century-long trends to avert calamity, or chide us for fating humanity to decades of violence and centuries of exile from our lands.

As easy as it is for many of us to celebrate historical heroics and lament historical tragedies, it can be difficult to think of ourselves, our lives, as part of that same trajectory of history. We need to learn to see ourselves through the eyes of future generations and recognize the enormity of the situation we face.

If we want to protect our independence — to ensure that our hope of living free in our land does not return to being a dream of Zion — the Maccabee thing to do, the Zionist thing to do, is to take initative and use the tools at our disposal to secure a safe future.

We are blessed today to have a State of Israel that is an expression of our national spirit, but it is painfully apparent that neither the State nor the global Jewish organizations who fight to support it have yet realized the enormity of the threat. They have so far stayed passive, satisfied to be merely a resource available to others if they choose. That is not good enough. We need to use all of the tools at our disposal to address this threat to our sovereignty. We need to think local and act global. The State needs to make this our second, if not first, priority for foreign and defense policy. Jewish organizations need to refocus on using their networks and influence to affect global policy to transition our energy economy within this decade to ensure our world doesn’t heat beyond the point where living in the Land of Israel becomes physically impossible.

On this Hanukkah, we need to place the fight against climate collapse at the forefront of the People of Israel’s collective agenda. We need to understand this fight as a war of independence, as a struggle against a rapidly encroaching exile. We cannot wait for the miracle to happen to us; we must be the miracle the world needs, because only by doing so will we avoid the same tragic fate of the short-lived Maccabees.