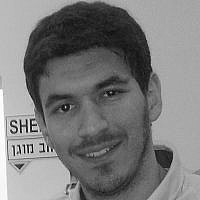 The Blogs
Avishai Sam Bitton
Apply for a Blog
Advertisement
Please note that the posts on The Blogs are contributed by third parties. The opinions, facts and any media content in them are presented solely by the authors, and neither The Times of Israel nor its partners assume any responsibility for them. Please contact us in case of abuse. In case of abuse,
Report this post.

Recently, I have attended many Israeli start-up, and innovation related conventions. The latest convention I attended, entitled “Next Israel” was held last Monday at the IDC Herzliya campus. This convention had a great deal of impact on me, because of one young student who raised her hand and asked Joanna Landau, Founder and Executive Director of Kinetis, “If Israel is so good at building start-ups, then why doesn’t the rest of the world know about it?” The young student’s question does not only impact the attendees of the convention, but rather impacts every one of us in Israel.

Your everyday tech-follower knows very well where Silicon Valley is, and what companies are based there. In 2012 The Startup Ecosystem Report stated that Tel-aviv is the world’s second best technology “valley” in the world, and that not enough people know about it.

Many Israelis often find themselves asking, “why is it so important for the world to know what we do?” The fact is, Israelis now have a platform, not only to be an engineer in innovation, but perhaps, and even more importantly, in order to show the world that Israelis produce more than just war machines and advanced weaponry.

Israel faces a major challenge insofar as attracting new start-ups to come and plant their roots in Tel Aviv. In order for successful start-ups in Europe, or Asia to even consider dubbing Tel Aviv their new headquarters, it is essential that Israelis begin campaigning their Start-Up City as the world’s second best place to build a company. Convincing new start-ups to pack their computers and move to Tel Aviv is not an impossible feat. Not very long ago, New York was battling the similar task of “selling itself” to start-up companies as being the place to call their home. This year, New York can officially say they have overcome this challenge, with many Silicon Valley firms now contemplating relocating from the west coast to the east coast.

So the money question becomes, how do we bring new innovational businesses to Israel? Moreover, how do we ensure that our brightest minds, and prospering companies are here to stay? The answer to both questions is quite simple, we need to go from being “good” to being “excellent”.

In order to pave our path to excellence, we must first understand why the rest of the world values Israel at a lower standard. Companies such as Babylon, Sandisk, Jajah, Any.DO, Fring and Waze have given Israel a lot to be proud of, and some invaluable worldwide publicity. While these companies are household names to most tech bloggers, the majority of people, some of whom may have even heard of these companies before, would not be able to point out the headquarters of these Israeli-born businesses on a map. As long as the rest of the world remains in the dark with regards to Israel’s leaps in innovation, we will never get promoted from “good” to “excellent.

In my opinion, Israel has the motivation but lacks the tools to be considered “excellent”. Israel’s disconcerting appearance to the rest of the world, despite its actual ranking in the 2012 Ecosystem Report, is due in part to poor publicity by the Department of Advocacy. In my work as a consultant to Israeli start-up companies, I have encountered many Israeli entrepreneurs with hopes of taking their company worldwide. Many of these young professionals share with me a concern that I find quite saddening. Most Israeli start-up companies are fearful that their international clients will find out that the business they are working with is based in Israel. I believe that the first step to changing the way the rest of the world sees Israel, is to invest in a better Department of Advocacy that will place more emphasis on demonstrating to the rest of the world how prosperous businesses can be if they choose to launch in Israel. New foreign businessmen that successfully establish Israel as home base for their companies will inadvertently become new ambassadors for Israel, who will most likely begin to publicly advocate for our country. This will help to spark a chain reaction, where Israel will capital by eventually being able to entice bigger companies to develop bases here as well. Thus creating more jobs, and a healthy competitive environment for businesses to excel.

Often times people judge a book by its cover. Sadly, this is the case for Israel. As a nation, we must recognize how we appear in the eyes of the international business world, and work together in order to build our appeal. If we do not work together to go from being “good” to being “excellent”, then soon enough another start-up-friendly city will come along and take Tel Aviv’s number two spot.

This article was written by Avishai Sam Bitton & Leytal Ross

About the Author
Originally from NYC, finished my Masters degree in Organizational Consulting at the IDC RRIS in Herzliya. I am the Marketing VP at imonomy and the owner of Go Social a social media marketing firm.
Comments