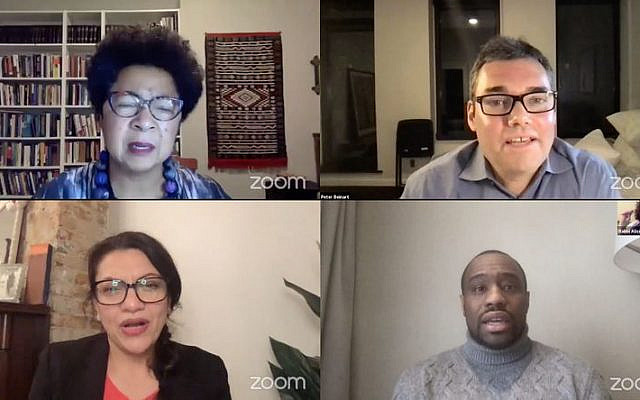 Last week, I joined a controversial Zoom call about “dismantling antisemitism” hosted by Jewish Voice for Peace, a self-described anti-Zionist organization, with a speaker lineup that ironically read like a who’s who of prominent anti-Israel voices.  A number of the panelists have rightly come under fire for pedaling antisemitic tropes and fostering division between Jews and others. The panel was well choreographed, and it left me with the impression that its mission was to show that you can want to get rid of Israel and still be against antisemitism.  You can’t.

Peter Beinart, one of the panelists who calls himself a “cultural Zionist,” recently wrote an essay eschewing a two-state solution and embracing a single state approach that would, in fact, spell the end for Israel as a Jewish state.  Beinart closed the panel discussion calling to “let this be the beginning of a process of listening.” I did listen. While I heard some positive statements, I also heard remarks that were greatly troubling.

First, there were some incredibly good things said on this call. Each speaker in fact acknowledged that antisemitism is real, it is spreading, and it must be addressed. They recognized that Jews have suffered and continue to suffer threats of antisemitism in the United States. Jews, Blacks, Muslims and other ethnic and immigrant groups all share histories of oppression, and we can and should learn from each other and work together to improve our society so that everyone has a fair opportunity regardless of their skin color, nationality, identity, or religion.  They made clear that white supremacist hatred and bigotry threaten us all.

Marc Lamont Hill, another panelist, and Peter Beinart both properly acknowledged that there is antisemitism on the left as well, and we need to be ready to challenge it. But that was clearly not the focus of the conversation.

The panelists spoke at great length about solidarity with Jews, but clearly only some Jews.  I heard Rabbi Alissa Wise, the JVP host, say that Jews don’t need a homeland or a refuge and that she was repulsed by the idea that Jews would look to Israel as a protection against genocide. Tell that to the Jews of Europe in 1939.  I heard false accusations that “Zionist lies” create divisions and seek to oppress Palestinians.

Marc Lamont Hill spoke of having our “freedom dreams” and of the need for self-determination – as long as no one else loses their freedom in the process, a clear reference to the false critique that Israel won its freedom by oppressing the Palestinians.

Zionism is the Jewish people’s modern freedom dream, one that draws on a dream of many thousands of years that Jews will have self-determination and live freely in their ancestral homeland. During Hanukkah, we celebrated this same freedom dream that also inspired the Maccabees – at a different time but in exactly the same place – to end Greek oppression and re-establish independence.

Zionism envisioned an open society with civil rights for all, fair labor laws, the value of work and above all else a homeland where Jews could rule themselves and join the family of nations with respect and dignity.  Jews created a society and built that homeland.  The Zionist freedom dream still inspires the Jews of Israel and Jews around the world to ensure that Israel will survive and thrive.

If you are in solidarity with me and millions of other Jews, you can’t want to see Israel simply disappear.  Israel is perhaps the ultimate expression of Jewish self-determination, and seeking its marginalization and elimination violates the lofty principles the panelists espoused.

If you are in solidarity with roughly half of the world’s Jews living in Israel – Jews from Europe, Africa, Asia and the Americas – you can’t deny them the right to self-determination and the right to defend themselves from a near constant threat of annihilation. And you can’t stay silent about the antisemitism in too much of the Arab and Muslim world that directly results in deadly attacks on Jews.

Rep. Rashida Tlaib, perhaps the most controversial speaker on the panel given her track record, talked about a great deal about her work to ensure that no one else feels like an “other.” Yet this entire discussion turned me and millions of Jews who support a strong, independent Israel into “others.”

Why not show solidarity with Palestinians by helping create a positive vision for their future that does not come at the expense of Jewish freedom or humanity? Why not speak out against the failure of their leadership which continually rejects any overtures of a peace process, glorifies violence and oppresses their own people?

Working together across religions, races, ethnicities and political parties is absolutely essential to building a more just America and addressing the very real challenges ahead.  But Jews have learned too many times that we are more vulnerable to antisemitism in a world without a Jewish state.  Yes, a refuge, but so much more.  A place of pride and innovation, a place of humanitarian outreach and the blossoming of our ancient culture.  A world with Israel is a safer world for Jews and a better world for humanity. And a world with a strong U.S.-Israel alliance makes both countries stronger and better able to tackle problems from healing the sick and feeding the hungry to combatting Iranian aggression.

Together we must fight antisemitism on the right AND the left.  A central part of that fight is protecting the Jewish people’s right to self-determination in their ancient homeland.  Solidarity with Jews that envisions an end to Israel is false solidarity and the breeding ground for antisemitism.