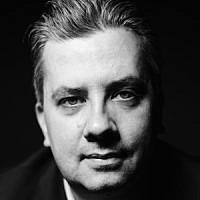 It is becoming much easier for anti-Semites to voice their insane theories in public with little to no reproach. For example, somewhat recently, the Jerusalem Post reported that a senior rebel leader claimed, “Ukraine’s Jews are responsible for the Euromaidan revolution that ousted their country’s pro-Russian president last year.”

This is not the first time the crisis in Ukraine has been blamed on the Jews. Alexander Zakharchenko, president of the breakaway Donetsk People’s Republic, stated in a press conference this February that the government in Kiev is run by “miserable Jews.”

Ha’aretz reported that the Charleston shooter sees “Jewish identity” as the root of the problem facing the nation and the “white race.” In an online rant, he allegedly wrote:

In my opinion the issue with Jews is not their blood, but their identity. I think that if we could somehow destroy the Jewish identity, then they wouldn’t cause much of a problem … If we could somehow turn every Jew blue for 24 hours, I think there would be a mass awakening, because people would be able to see plainly what is going on.”

He went on to write: “I don’t pretend to understand why Jews do what they do. They are an enigma.” This idea that Jewish identity is something “uniquely” different from the rest of humanity is not new. The “Protocols of the Elders of Zion,” a known anti-Semitic forgery, purports to expose secret Jewish efforts at world domination. Henry Ford’s The International Jew painted the Jews as monolithic, malicious schemers plotting to control the Gentiles. “If there is one quality that attracts Jews, it is power,” the book stated. It went on to say, “Wherever the seat of power may be, thither they swarm obsequiously.”

Perhaps the most notorious conspiracy theory of recent history is that “4,000 Jews” were pre-emptively warned to stay away from the World Trade Center the day of the 9/11 terrorist attacks.

More often these conspiracies are extended to the nation of Israel. Before 1948, it was the collective Jewry that was responsible for the world’s calamities. Today, Israel is seen as the evil state that is the cause of the problem in the Middle East, a Zionist cabal bent on world domination.

While these allegations are not new, they are being uttered in public with little or no condemnation from the watching world. A recent Turkish film Üst Akıl (Mastermind) claims that Jewish people have conspired to dominate the world for 3,500 years.

In a report from last year, Ha’aretz revealed that a Dutch ministry employee claimed IS (ISIS) was “part of a plan by Zionists who are deliberately trying to blacken Islam’s name, says project leader at the ministry.”

Soccer fans all over the world scream anti-Semitic obscenities with little or no recourse. The Israeli judo team was met with death threats in Morocco in May of this year. Recently, an angry mob chased an Israeli team off the soccer pitch. Prior to this, the crowd sang anti-Israeli songs.

“From the start of the match they began throwing bottles at us and were singing anti-Semitic songs against Israel,” said Ashdod striker Michael Ohana. “We prayed that we would be able to leave the stadium safely. You don’t think about it when it happens, but there is no doubt that our lives were in real danger at that moment.”

In France, the rise of anti-Semitism (physical attacks specifically) has caused my Jewish people to consider leaving. And as many as 20,000 have moved to Israel over the last five years

What can be done to combat this? To quote Abe Foxman:

It is incumbent upon all good people who reject hateful conspiracy theories and anti-Semitism to stand up and speak out, so that these unacceptable views remain marginalized and relegated to the far fringes of society and the darkest corners of cyberspace.”

And let us not forget the Bible’s call for Jews and Christian to be lights to the nations, to speak out against lies, and to defend the oppressed. These traditions bind the two groups together. But, all truth seekers, of all faith traditions, should oppose hate and bigotry.