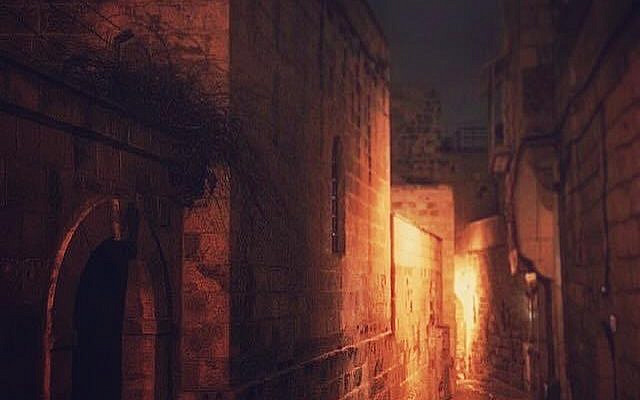 It wasn’t the first time I kissed a woman, but it was the first time in public — in the middle of Jerusalem — in the center of the universe, next to these two rabbis dressed like penguins.

The bartender was Queen Esther, with an eyebrow ring.

Rivky stood out with her curvy waist, and tall black boots, her long brown hair curled at the ends.

“It isn’t really mine,” she whispered to me. “Mine isn’t as pretty, but my husband likes it.”

Eyelashes like butterfly wings, and the softest lips I had ever felt.

She wore a mask around her eyes, rimmed in glitter, green like tiny emeralds.

Her mother tongue was Yiddish – then a bissel English. Hebrew she learned much later when she had to get a job while her husband learned.

She has ten kids, ages 2-12, each one an inch taller than the last

“If you line them up side by side you have a staircase to Hashem,” she told me.

We met near the shuk and we took a walk, drunk, stumbling over our own four feet, and she kissed me and no one noticed, because everyone was dancing and everyone was drunk and in a city hewn from stone where people seldom cross worlds, except sometimes when they drink too much and dance too much, and always on Purim when we have the best excuse of all:

May you be so drunk that you don’t know the difference between Blessed be Mordechai and Cursed be Haman.

It was my first Purim in Jerusalem – I had been to the Purim parties in Tel Aviv, and they’re fun, but whatever. They’re one-night stands. Fun. Forgettable.

Jerusalem is different. This was my first time watching a rabbi in a giant sombrero read the Megillah while we all took shots of whisky and tequila, it was my first time partying with secular and religious people, Arabs and Jews without knowing who was who, and not caring, either. It was my first time realizing that in the walled city, walls could come down.

I thought I knew Jerusalem. I was spending the year living in the Old City of Jerusalem – spending time in each quarter — crossing invisible barriers, living as a mermaid and flowing between different worlds. But I was only one person doing this, and even then, it was easy to walk past a sea of people in black and white and only see the sea and not each face. It was too easy and too natural to move through space in each of our own lead bubbles — and sometimes when I would smile at someone, they would look startled and that’s IF they even saw me – a woman with bare shoulders and tight jeans and loose hair, a single mom with two kids and exposed collarbone, and high heels and a mermaid tattoo on my right arm. Sometimes, they ignored. Sometimes, I forgot to look, too.

Purim in Jerusalem is different.

Purim in Jerusalem grabbed me by the arm and pulled me past every barrier, through the walls, shattering windows, and flinging open every single barricaded door.

And I wasn’t the only one: This was the first time I watched entire communities move between the lines, eagerly trampling over them, literally making love on top of them. Not just the different Jewish communities in Jerusalem – secular, religious, Right and Left, but the Palestinian ones, too – I saw clowns speaking Arabic, and a princess with long purple hair and a mustache, too, yell “Kif halak, habibi,” to a man dressed as a nun.

We wear our costumes in Purim, but are they really costumes? Or are we, instead, revealing something we wish we were somehow – a sliver of darkness or a really funny joke. Long purple hair. And Rivky with glitter like emeralds around her eyes, like a noble queen or an ancient goddess, her step-by-step children tucked away asleep, her husband, too, in bed, her job teaching ten hours a day in another life somewhere safe, but far away, while she ran through the shuk both regal and wild.

And I was part of it there in the middle of the shuk while the two rabbis dressed as Penguins did jello shots when Rivky kissed me, and I thought how thirsty she seemed, and how thirsty I was, too, not for this moment but for the possibilities that happen when we push beyond the barriers that we create.

We stagger through the desert every year, and on Purim we reach the sea, wide and limitless and always overflowing. And I kissed her and she kissed me, and her mouth was soft, and she tasted like salt and silt and the sweetest wine. 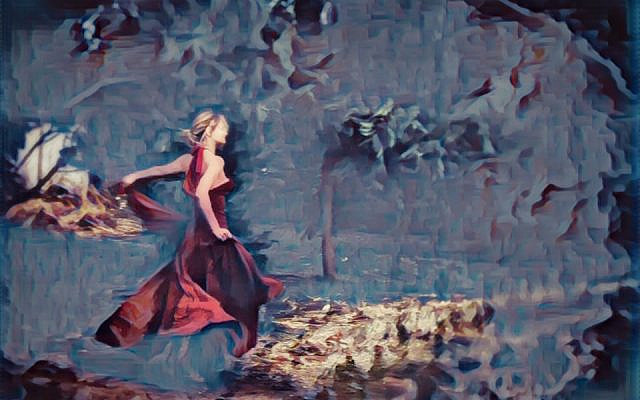