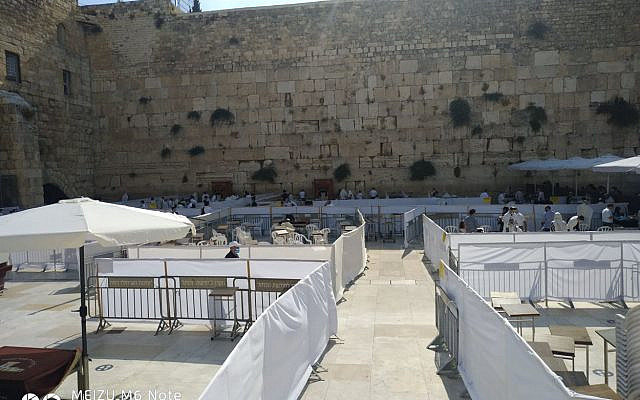 The Kotel partitioned into sections due to the coronavirus. Courtesy Sharona Halickman

The Talmud, Shabbat 119b lists many different reasons for the destruction of Jerusalem. Unfortunately many of the same mistakes are still happening today in respect to the coronavirus.

Below are three examples from the Talmud:

Rav Hamnuna said: Jerusalem was destroyed because schoolchildren were interrupted from studying Torah. As it says in Yirmiyahu 6:11: “And I am filled with wrath of God, I cannot contain it, pour it onto the infants in the street and onto the gathering of youths together, for men and women alike will be captured, the elderly along with those in advanced years.”

When the destruction took place, the children were not in school, they were in the streets and old and young were attacked equally, the vulnerable were not spared.

Ulla said: Jerusalem was destroyed because people had no shame. As we read in Yirmiyahu 6:15: “They acted shamefully; they have performed abominations, yet they neither were ashamed nor did they know humiliation. Therefore, they will fall among the fallen, they will fail at the time that I punish them, said God.”

They were so used to transgressing, that they no longer felt guilty or ashamed.

Rav Amram, son of Rabbi Shimon bar Abba, said that Rabbi Shimon bar Abba said that Rabbi Hanina taught: Jerusalem was destroyed only because the people did not rebuke one another, as it is stated in Eicha 1:6: “Her ministers were like stags that found no pasture, and they walked without strength before their pursuer.” Just as this stag turns its head towards the other’s tail when it grazes and each one feeds on its own, so too the Jewish people in that generation lowered their faces to the ground and did not rebuke one another.

Each person was looking out only for themselves. They were afraid to say something to anyone else.

How do these examples from the Talmud manifest themselves today?

Many educators and rabbis feel that the schools should remain open no matter what. This is a big mistake. Students and teachers who did not show symptoms of the coronavirus went to school and ended up infecting their entire school community and beyond. The schools at this point are not set up for social distancing. Until the schools are properly organized, they must move to remote learning in the form of Zoom classes, educational videos and reading and writing assignments. Cancelling in person school does not mean eliminating the education of our children. We are not leaving our children to hang out on the streets. As we see in Yirmiyahu, people of all ages are vulnerable.  Right now, health must come first.

A large portion of the population is trying to follow the rules of wearing masks, not congregating, keeping the number of participants at life cycle events within the permitted numbers etc. Yet others, including elected officials don’t follow the rules properly and even flaunt the fact that they don’t follow them. This includes politicians not wearing their masks properly, not going into isolation when they were in contact with a person who tested positive or attending gatherings at a time when they were forbidden. To not follow the rules and even flaunt the fact that you are above the law is very similar to Yirmiyahu’s description that they acted shamefully yet were not ashamed.

Just as people did not rebuke each other in the days leading up to the destruction of the Temple, so too we have this issue now. Friends need to put on the pressure that it is not ok to take off your mask. If invited, they must insist that they will not participate in gatherings that are not permitted by the Ministry of Health. The only way that we will be able to get through this pandemic is if we look out for each other and not ignore what people are doing wrong because we are afraid to say anything. We can’t be like Yirmiyahu’s description in Eicha of stags with their heads in the ground.

Unfortunately, you will find secular Israelis who blame the spread of the coronavirus on the Charedi population and vice versa. Instead of pointing fingers, each group has to take a good look inward and work to improve their own communities.

A few  nights ago, I drove past a Charedi wedding which did not follow the restrictions and I heard that there was a secular bat mitzvah with way too many guests including many prominent entertainers. Rather than attack others, we much work to improve the situation from within.

I am happy to hear that the Karlin-Stoliner Rebbe told his followers to be even stricter than the Ministry of Health’s regulations. He said that all educational institutions should close for now and go back to learning remotely, everyone should wear masks properly, avoid attending celebrations etc.

May the three weeks where we mourn the destruction of Jerusalem be a reminder that we must learn from the mistakes of our ancestors. Only by working together will we be able to fight this plague.