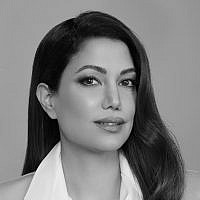 The Blogs
Lital Shemesh
Apply for a Blog
Advertisement
Please note that the posts on The Blogs are contributed by third parties. The opinions, facts and any media content in them are presented solely by the authors, and neither The Times of Israel nor its partners assume any responsibility for them. Please contact us in case of abuse. In case of abuse,
Report this post.

I participated in the Dialogue for Peace Project for young Israelis and Palestinians who are politically involved in various frameworks. The project’s objective was to identify tomorrow’s leaders and bring them closer today, with the aim of bringing peace at some future time. The project involved meetings every few weeks and a concluding seminar in Turkey.

On the third day of the seminar after we had become acquainted, had removed barriers, and split helpings of rachat Lukum [a halva-like almond Arab delicacy] as though there was never a partition fence between us, we began to touch upon many subjects which were painful for both sides. The Palestinians spoke of roadblocks and the IDF soldiers in the territories, while the Israeli side spoke of constant fear, murderous terrorist attacks, and rockets from Gaza.

The Israeli side, which included representatives from right and left, tried to understand the Palestinians’ vision of the end of the strife– “Let’s talk business.” The Israelis delved to understand how we can end the age-old, painful conflict. What red lines are they willing to be flexible on? What resolution will satisfy their aspirations? Where do they envision the future borders of the Palestinian State which they so crave?

We were shocked to discover that not a single one of them spoke of a Palestinian State, or to be more precise, of a two-state solution. They spoke of one state – their state. They spoke of ruling Jaffa, Tel Aviv, Akko, Haifa, and the pain of the Nakba [lit. the tragedy – the establishment of the State of Israel]. There was no future for them. Only the past. “There is no legitimacy for Jews to live next to us” – this was their main message. “First, let them pay for what they perpetrated.”

In the course of a dialogue which escalated to shouts, the Palestinians asked us not to refer to suicide bombers as “terrorists” because they don’t consider them so. “So how do you call someone who dons a vest and blows himself up in a Tel Aviv shopping mall with the stated purpose of killing innocent civilians,” I asked one of the participants.

“I have a 4-year-old at home,” answered Samach. “If God forbid something should happen to him, I will go and burn an entire Israeli city, if I can.” All the other Palestinian participants nodded their heads in agreement to his harsh words.

“Three weeks ago, we gave birth to a son,” answered Amichai, a religious, Jewish student from Jerusalem. “If God forbid something should happen to him, I would find no comfort whatsoever in deaths of more people.”

Israelis from the full gamut of political parties participated in the seminar: Likud, Labor, Kadima, Meretz, and Hadash (combined Jewish/Arab socialist party). All of them reached the understanding that the beautiful scenarios of Israeli-Palestinian peace that they had formulated for themselves simply don’t correspond with reality. It’s just that most Israelis don’t have the opportunity to sit and really converse with Palestinians, to hear what they really think. Our feed of information comes from Abu Mazen’s declarations to the international press, which he consistently contradicts when he is interviewed by Al Jazeera, where he paints a completely different picture.

I arrived at the seminar with high hopes, and I return home with difficult feelings and despair. Something about the narrative of the two sides is different from the core. How can we return to the negotiating table when the Israeli side speaks of two states and the Palestinian side speaks of liberating Palestine from the Jordan River to the Mediterranean Sea? How can peace ever take root in a platform which grants legitimacy to terrorism?