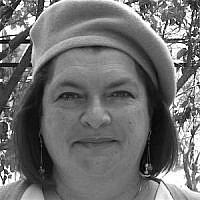 The Blogs
Judith Sinclair-Cohen
Apply for a Blog
Advertisement
Please note that the posts on The Blogs are contributed by third parties. The opinions, facts and any media content in them are presented solely by the authors, and neither The Times of Israel nor its partners assume any responsibility for them. Please contact us in case of abuse. In case of abuse,
Report this post. 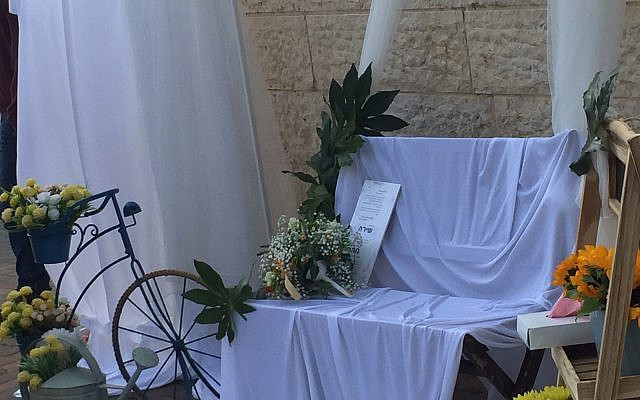 Tuesday afternoon the boy from Number 10 got married.

Perhaps I should explain. Number ten of our quiet cul-de-sac here in Modi’in. Actually, Matan was due to marry his bride, Shira, in a wedding hall next Sunday. However, during the Coronavirus pandemic there have been increasingly strict sanctions in Israel on meeting in public. Gatherings were Initially restricted to a hundred people, then fifty, closely followed by ten. Who knows if by next Sunday if it would be at all possible to hold a wedding.

According to tradition such celebrations shouldn’t be delayed. So, the families brought the date forward, and decided to hold the wedding outside their home. We were assured that all would be carried out in accordance with Ministry of Health regulations.

It was planned for between 2 and 4:30pm. In attendance would be: the bride & groom, parents, siblings, grandparents, a rabbi, two witnesses. Neighbours were welcome to look on from afar standing two metres apart on the street; or, where possible, looking down from their balconies.

The street WhatsApp, which usually enjoys peak activity on a Friday afternoon in search of an emergency egg, began operating at full throttle: Who’s got a suitable chair that we can use for the bride? What about a small table to be put near the Chuppah (bridal canopy). Any suggestions for decorations?

It’s difficult to describe the excitement. In the morning, the parking spot from number seven was vacated. Two neighbours (from numbers six, seven and eight) had taken charge of the decorations. A Chuppah of white was erected. A path of the same colour was created to lead there from the bridal chair, some ten metres away on the other side of the road. The path was lined by two rows of flowers.

This wedding may have been out on the street yet, there was no compromise on dress: By 2pm all were beautifully attired. The groom wore a crisp new blue suit, his brothers-in-law-to-be sported bowties. A bevy of bridesmaids dressed in light green had their hair perfectly coiffed. They were almost as elegant as the grandmothers of the bride and groom. And among the ubiquitous disposable gloves, I spied at least one pair of stiletto heels holding their own on our cobblestone road.

At 2:30 the music began. A musician on a keyboard enhanced by loudspeakers.

The groom went back indoors and the bride appeared from the entrance of the street…
We were honoured that the garden bench from the entrance to our home – more accustomed to accommodating heavy shopping bags – had been chosen as a chair for the bride. It had been adorned with a white Shabbat tablecloth and green foliage and placed in a niche created with white netting near the entrance to the groom’s home. And there she sat, surrounded by spring flowers and serenaded by female family members. After some time, her betrothed approached surrounded by a handful of dancing men and boys from the family. He gently lifted her veil as part of the bedecken ceremony.

What was it about this wedding that was so different yet so real? Certainly, it was an affirmation that despite everything, life – and love! – continue. But more than that, by distilling this wedding down to its essence, these families somehow connected us to that undiluted joy: the joy of all those, who throughout the centuries, and in all manner of circumstances, have endorsed their love by embracing this simple ceremony that is the touchstone of Jewish Life.

The groom was danced to his position under the Chuppah. We held our breath. The bride approached and slowly circled him seven times. A sister and a brother served as MC. The Rabbi conducted the service with great dignity. The seven blessings were shared by male family members. The glass was broken underfoot and the dancing began in earnest.

As a nod to the pandemic, the men formed a circle holding up chairs between them instead of holding hands directly. The women joined a circle holding sashes. A mechitzah (partition) was put up between the men and the women. And I noticed – from afar! – that the stilettos had been abandoned in favour of dancing shoes. Neighbours were cheering them on; including two toddlers dressed in shocking pink – representatives of the next generation.

The celebrations were still in full flourish when the wedding was due to finish at 4:30 pm. A police car arrived at the entrance to the street. After looking on for five minutes they did what they were charged to do. An announcement came over the car’s loudspeaker that those whose presence was in excess of the ten permitted, should leave. Otherwise they would each be fined 5,000 NIS.

Quicker than you can say ‘coronavirus’ we dispersed; our afternoon having been all the richer for the experience.