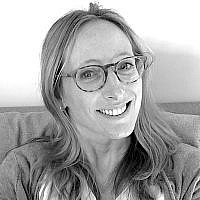 The Blogs
Michal Nordmann
Apply for a Blog
Advertisement
Please note that the posts on The Blogs are contributed by third parties. The opinions, facts and any media content in them are presented solely by the authors, and neither The Times of Israel nor its partners assume any responsibility for them. Please contact us in case of abuse. In case of abuse,
Report this post.

This Yom Hazikaron was a new experience for me. In a sad way. In a good way. In an emotional roller-coaster-can’t-stop-crying-it’s-almost-funny kind of way. This year, as I took my annual place alongside my sister at the tekez in Kikar Rabin, Tel Aviv, my heart was already thumping faster, the lump in my throat was already there. By the time President Rivlin appeared on the screen, speaking live from the ceremony at the Kotel, the lump was a choke, and when the opening chords of the Hatikva struck, the tears were gushing like a hundred little waterfalls down my cheeks. It normally takes until at least the first story of a fallen soldier to set me off! And this year, rather than feeling slightly ashamed of my emotional state, I didn’t care. I let the tears flow, used my sleeve when the Kleenex ran out, and then cried some more. And this year, I felt I knew the people I was crying about.

Let me take you back six months. Back in November I started planning a campaign for Olami, a global organization promoting Jewish greatness on campus, called Honor Israel’s Fallen. A campaign to enable Jews around the world to join with Israeli Jews in commemorating and honoring Israel’s fallen. For three months, while working closely with the Afikim Foundation and the Ministry of Diaspora Affairs, the campaign was in planning and strategy mode, and the basics of the implementation. My heart rate was normal. My tear ducts in tact. By February, we began with the detail. The website honorisraelsfallen.com was in place and the marketing of the campaign began. Which meant reading many of the 23,632 biographies on the site. It meant reading one, and then another, and then another. It meant honoring one, and then another, and then another. Because after you’ve read about a person, understood who he was and what he stood for, what subjects he excelled in and which sports he played. When you’ve heard his best friends, his parents and his army unit describe him, and when you’ve read how he met his death, you can’t not honor his memory. Because you also know why he met his death. He met his death because he was fighting for me. For my right to be here. For my freedom. For the freedom of my children. And hopefully theirs too. So three months ago, my emotional state was heightened, as my reading deepened. I began to feel a deep connection to these people who fell protecting Israel. I started understanding more about the structure of the army, the different titles and badges. I even googled different army bases and cities so that I would understand where in this little country they are (which is an achievement coming from someone who has to turn on Waze to drive 6 minutes down the road – and I still manage to get lost!).  And then the videos and letters started coming in. Because on HonorIsraelsFallen.com it’s not just to read about people’s lives and do a positive act to honor their memory, it’s about building connections and relationships as well. Participants from around the world began to send letters and videos to the families of the fallen, offering their condolences and sharing what they had done to honor their loved one’s memory.

Sacha Johnstone, an English student, sent this personal and heartfelt message to the family of Roi Klein, who died in Southern Lebanon in 2006, aged 21.

“I’m struggling to find the words. I’m amazed that I can feel such an incredibly strong connection to a man who passed away a few years before I was born…I would not be able to walk the streets of London as a proud Jew if it were not for the sacrifice Roi made. When he jumped on that grenade he wasn’t just defending the lives of those around him, the soldiers in his immediate vicinity, of Israelis and Israel’s borders. He was defending the lives of the entire Jewish people. And for that I will be eternally grateful.”

And the families began writing back. Relationships were being formed in front of my very eyes.

Thank you so much! We read your words and felt as if we are together. I will forward your mail to all of our family. In this special day your words mean a lot to us. What you are doing means a lot to us. There are no words to explain how much.

From all our heart we send peace and love to you.

So by the time it came to Yom Hazikaron, I felt everything about me was different. When the songs were sung and stories were told, I felt more connected. During the Hatikvah, I closed my eyes and the names of the soldiers I had read about went through my mind. Nir Nachum. Gilad Mishayaker. Shir Hajaj. Natan Lopez. Shalom Admoni. I cried for them and their siblings and parents, whose names I now know. I cried for their lives lost, potential wasted. I cried for the thousands more that I didn’t know. This year was different because I got to know the soldiers for whom this memorial day was established. I got to know them, and I did something to honor their memory.

So I urge you, next year before Yom Hazikaron, carve out a little time to learn about our fallen soldiers, and do a positive act in their memory. Your Yom Hazikaron experience will be heightened beyond measure.

About the Author
Michal made aliyah five years ago from Manchester, England and is Director of Marketing for Olami, a global community of organizations committed to inspiring young adults to achieve their Jewish greatness through Jewish learning and practice.
Related Topics
Related Posts
Comments