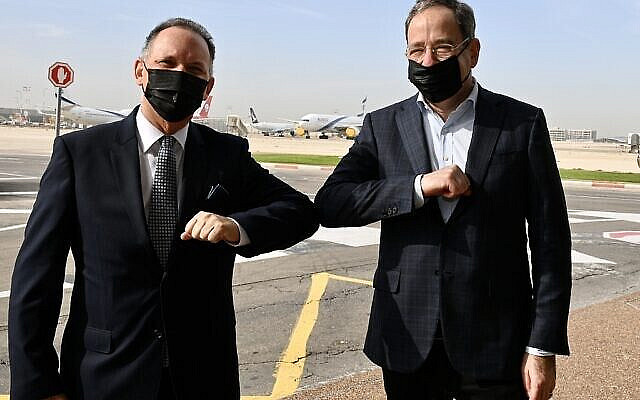 Welcome to Israel Ambassador Nides. We watched with excitement as you arrived in Israel this week to begin your time as the American Ambassador to Israel. Many of us have followed your career in the State Department for years and have admired you from afar. We know you’re a Zionist like us with a special place for Israel in your heart. Like many of us, you came to Israel for the first time as a teenager and fell in love with the Jewish people’s homeland.

Israelis are excited to once again have an American Ambassador in Israel. It’s been ten months since former Ambassador David Friedman ended his tenure. During his time as Ambassador, David Friedman oversaw the moving of the American Embassy from Tel Aviv to Jerusalem, America recognized Jerusalem as Israel’s capital and Israel’s sovereignty over the Golan Heights, and shepherded the signing of the Abraham Accords. We are grateful for Ambassador Friedman’s service to America and his strengthening of the US-Israel relationship and we are confident we will be just as grateful to you.

Israelis are well known for our hospitality; we warmly accept strangers into our cities and homes. We look forward to seeing you in our towns throughout all the land of Israel. Israelis appreciate America and the warm friendship our two nations share. As America’s representative in Israel you are the embodiment of America in our great land. More than a stranger, we see you as a friend, a neighbor and a brother, and we look forward to treating you to the warmth family members deserve.

American ex-pats who live in Israel are the second largest American ex-pat population in the world. American citizens live in the center of Jerusalem, on the beaches of Haifa, Tel Aviv and Gaza, and in the small towns of Judea, Samaria, the West Bank and the Golan Heights. We look to our Embassy in Jerusalem for our consular services, from renewing our passports to declaring the birth of new children. Over the past two years of COVID these services have faced many challenges. As we pull out of COVID, we hope you’ll ensure these services are made quicker and easier.

Like any family members, America and Israel are close, but we don’t agree on everything. The current negotiations with Iran worry us. We can’t afford a strong Iran, let alone a nuclear Iran. We’re concerned the Biden administration won’t hold Iran’s feet to the fire and secure a deal that will stop Iran’s nefarious activities. Building in Judea and Samaria is a priority for many of our people, and we know the Biden administration isn’t supportive of our development in these areas. The Biden administration campaigned on a pledge of converting the American Embassy Branch on Agron Street in Jerusalem to a Consulate offering outreach to Palestinians. Israelis view the opening of a de-facto Palestinian consulate in Jerusalem as an infringement on Israel’s right to Jerusalem as its capital. We hope you’ll keep disagreements within the family, articulate Israel’s perspective to President Biden so he understands our point of view, and not allow disagreements to adversely affect the strong relationship we value so dearly between our nations.

I’ll close with one warning. Israel has a way of capturing people’s hearts. Vacations tend to become Sabbaticals and first-time visits become regular returns. It’s rare to find someone who has only visited Israel once and has no plans of returning. Your two predecessors, Ambassadors Dan Shapiro and David Friedman never fully returned to America. They’ve taken up residences in Israel and can be frequently seen enjoying life here. Here’s my warning, don’t assume you’re here for a short stint as Ambassador; be careful, Israel has a way of grabbing you!

We wish you great success and may God guide you in all that you do. We are happy you’re here with us.