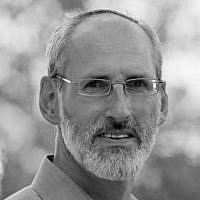 The Blogs
Elihu D. Stone
Apply for a Blog
Advertisement
Please note that the posts on The Blogs are contributed by third parties. The opinions, facts and any media content in them are presented solely by the authors, and neither The Times of Israel nor its partners assume any responsibility for them. Please contact us in case of abuse. In case of abuse,
Report this post.

The term Beit Hamikdash (Holy House or Sanctuary) is the classical reference used to denote, the 1st (954 B.C.E – 587 B.C.E) and 2nd (515 C.E. – 70 C.E.) Temples that the Jews built in Jerusalem on their holiest site, the Temple Mount. The term appears extensively throughout Rabbinic literature. The biblical prophet Ezekiel refers to desecration of the Sanctuary (Ezekiel, Chapter 44:7)  –using both words “Bayit” and “Mikdash”.

Sheikh Raed Salah, head of the Islamic Movement in Israel, used an Arabized version of the term Beit Hamikdash, when he recently called upon on Arab residents of Judea and Samaria to launch a terror war against the Jews. Salah proclaimed “as long as we are connected to the residents of Bayt Al-Maqdis  and the environs of Bayt Al-Maqdis, we will continue to act against the Zionist aggression and we won’t allow a division in place and time (for Jews to pray on the Temple Mount).”

Salah seems to have missed the supreme irony that the very term he uses to rally Muslims against the “aggression” of Jews praying in Jerusalem and specifically near the Temple Mount originated more than a thousand years before the world had ever heard of Islam –to denote a site at the heart of Jewish life. The Arabs who much later moved to this region simply preserved the Jewish name for the place, much as they did with other biblical sites. Now, many Arabs – particularly Palestinian ones– are hell-bent on severing even the memory of the Jews’ ancient connection to their Sanctuary and removing all indicators of the Jews’ connection to their ancient homeland. How embarrassing it must be for Salah that the Arab names for so many places in Israel recall their original Hebrew-Jewish ones –evoking with each utterance the significance these places had and still have for the Jews.

Despite the recent Palestinian claims that the Jewish Temples never existed, Imam Abdul Hadi Palazzi, leader of Italian Muslim Assembly, quotes the Qur’an itself to support Judaism’s special connection to the Temple Mount. According to Palazzi, “The most authoritative Islamic sources affirm the Temples”. Indeed, Jerusalem is sacred to Muslims precisely because of its prior holiness to Jews and its eminence as home to the biblical prophets and the Jewish kings David and Solomon.

About the Author
Elihu D Stone practiced law in Boston, Massachusetts and is currently a member of the Israeli Bar; He is involved in the Al Durah Project, an initiative dedicated to understanding and countering the dilemmas and vulnerabilities that face democratic cultures in this age of aggressive asymmetric and cognitive warfare. Elihu has been privileged to serve in leadership roles for a variety of Jewish communal organizations and is an alumnus of the Wexner Heritage Foundation. The writer currently maintains a U.S. life insurance clientele and lives in Efrat, Israel
Comments