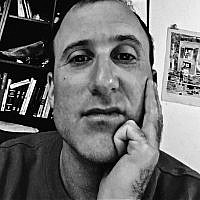 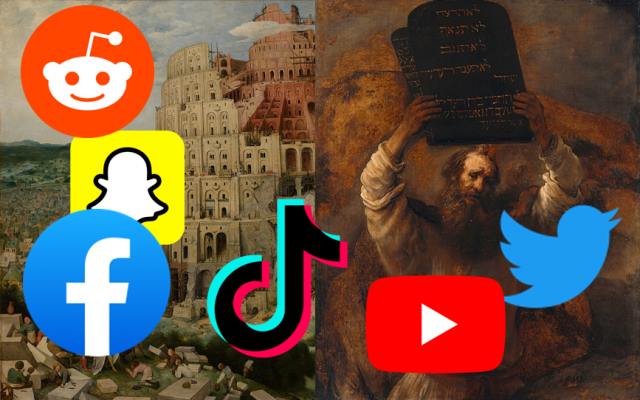 Illustration by the author. Featured images: 'The Tower of Babel,' by Pieter Bruegel the Elder, 'Moses with the Ten Commandments,' by Rembrandt, various digital media logos.

The parallels between Babel and Facebook are worse than you think. But the story behind Shavuot offers a different way to arrange information and society.

The bad news is that we’re replaying the Tower of Babel today. We’re awash in unprecedented technology and ready information, communicated among nearly everyone alive. And we’re tearing society apart as a result.

I’m hardly the only writer who thinks along these lines — for just one example from the genre, read Jonathan Haidt’s recent long think piece in The Atlantic. But as communication and technology wreak havoc on our sense of connection, it’s important to realize that Babel isn’t the only biblical story of information and society. There’s a countering narrative too — the narrative we’re about to celebrate on Shavuot. I’m speaking, of course, of Sinai.

After all, Sinai and Babel are opposites. Babel starts with a mass migration “from the East” (Genesis 11:2); Sinai is a stop along the way between Egypt and Israel — that is, back to the eastern homeland. The Babel story is one of people settling down in a valley (Gen. 11:2 again); Sinai is a mountain. In Babel, the people attempt to make a tower up to heaven; at Sinai, God explicitly commands the people to not go up the mountain (Exodus 19:12) — everyone stays planted on the earth.

A kind of Babel in reverse, Sinai proposes to undo what was done at Babel. And if we’re to learn from Sinai today, I think it’s important to zero in on how we misunderstand exactly how the world of Babel is like today’s information landscape — and how the experience of Sinai offers a better way.

At first blush, it seems that the story of Babel is one of a close-knit society torn apart by technological hubris. All of humanity shares a “single language for every person on earth” (Gen. 11:1), and a massive project of innovation — a city with a tower to the sky — tears that close fabric apart.

But a closer look shows that the people of Babel may not have been so close-knit at all. From the start, the story presents little about their collective peoplehood, and much more about their rootlessness. As opposed to the detailed genealogy of the children of Noah that just precedes it (Gen. 10), the story of Babel makes no mention of parents, children, or names. All we get is a vague origin story: a people lived in “the East,” and then they up and left.

Given a lack of any meaningful common past, it is no surprise that for all their ease of communication, the people of Babel have no confidence in their ability to stay together. “Come,” they say the moment they invent brickmaking: “Let us build us a city and a tower with its top in the sky to make a name for ourselves; else we shall be scattered all over the world” (Gen. 11:4).

Indeed, the moment God descends upon them to “confound their speech,” the people scatter every which way. The moment speech fails them, nothing remains to keep them put — not a commitment to a past, to a land, or to an ideal. It seems that the city and the tower — their great technological colossus — is merely a way to paper over a lack of real connection.

It’s tempting to see today’s parallels to Babel in a story of a once-cohesive community torn asunder by technology. But the story of Babel is more nuanced than that — and more similar to the story of our current tech than we may like to think about. Consider Facebook’s mission to “give people the power to build community and bring the world closer together.” It’s a lofty ideal, but it only make sense in a world that feels that it’s not so close to begin with. Platforms like Facebook are so attractive largely because they help us feel close in a society that pushes us away from each other — that expects us to graduate, to change jobs, to leave home, to move away. In a world where communication is seamless, Facebook is a technology that proposes to repair our broken ties. And, as in the world of Babel, we’re finding out that mere technology isn’t up to the task.

Sinai, as I said, offers something different. There, we see a national family we have followed for dozens of chapters representing hundreds of years, all standing as one. “All the nation together” tells Moses that “we shall do all that HaShem has spoken” (Ex. 19:8). And as I mentioned, God is adamant that everyone stand together at the base of Sinai — to the point that God even sends a bewildered Moses, who is already up on the mountain, hurriedly back down before God utters the Ten Commandments (Ex. 19:21-20:15). First we have togetherness, then we can have the information we hold on to together.

The people of Babel have a weak society whose disconnect is masked by magnificent technology and fluid information — their shared tongue — that, in the end, is mere words. At Sinai, a cohesive society culminates in information that makes those ties even stronger: the words of the Torah.

As Jonathan Haidt writes in the piece I mention above, “Social scientists have identified at least three major forces that collectively bind together successful democracies: social capital (extensive social networks with high levels of trust), strong institutions, and shared stories.” All three of those forces, he argues, are broken in our Babel of digital information. Sinai shows us what kind of information a more cohesive society can produce: not the mere words of Babel, but the communal religion, law, and shared story that Torah provides.

The lesson here — a lesson that’s crucial to consider in Shavuot 5782 — is that information doesn’t need to tear us apart. Babel doesn’t need to be the way things go. As the story behind Shavuot shows, our collective information can be the greatest force that holds us together (even if it’s information we’ve spent thousands of years arguing over). Because as the story of Babel shows, technology pulls us apart when we’re not really together to begin with. And as the story of Sinai shows, a people that stands together will discover information that binds them for good.

That people might even discover a whole different path for technology. The people of Babel built their tower out of bricks, the first great invention of that civilization. But at Sinai, celebrating their acceptance of the Torah, the Israelites look up and:

they saw the God of Israel — under Whose feet was the likeness of a pavement of sapphire brickwork, like the very sky for purity.” (Ex. 24:10)

There are lofty technologies still to be had — bricks the color of the sky — built on lofty information. But to find them, we must learn to go deeper than the tech and data. We need to seek out the real foundation of it all: us.

Some translations of the biblical text are based on Sefaria.

About the Author
Abe Mezrich is a Jewish writer and tech marketer trying to make sense of both sides of his experience. He is a regular contributor to the Tanakh site 929 English, and his articles and poetry have appeared in outlets including The Forward, Hevria, Tablet, The Lehrhaus, and elsewhere. His most recent collection of poems, Between the Mountain and the Land Lies the Lesson, is available from Ben Yehuda Press.
Related Topics
Related Posts
Comments