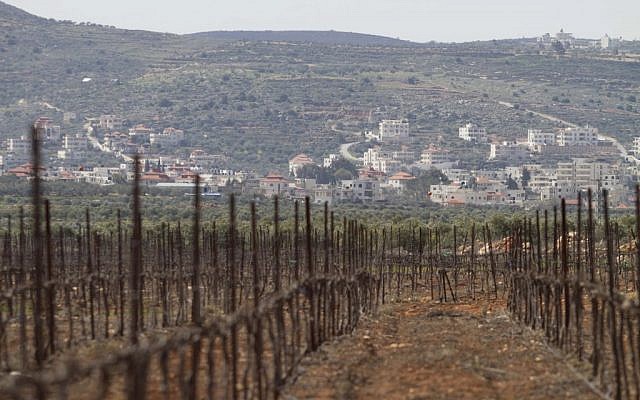 Illustrative. A vineyard in the West Bank. (AP Photo/Dan Balilty)

When Israelis head to the polls on April 9 for the second time in four years to cast their ballots in a general election, they’ll be confronted by an array of political, social and economic issues. This time around, they’ll have to factor one more consideration into their calculations: the criminal charges of corruption and fraud that the police have levelled against Prime Minister Benjamin Netanyahu, who’s seeking a record-breaking fifth term and hoping to surpass David Ben-Gurion as Israel’s longest-serving leader.

Yet, if the past is any guide, security will be their foremost issue of concern. Security trumps all other issues because Israel’s very existence is still at stake and challenged by rejectionists within the Palestinian national movement, Iran and Hezbollah.

As the Israeli author Micah Goodman writes in Catch-67: The Left, the Right, and the Legacy of the Six Day War (Yale University Press), “The Arab-Israeli conflict plays such a dominant role in the Israeli consciousness that it has all but taken over. While Israelis do care about questions of taxation, socio-economic inequality, and the relationship between religion and state, these issues rarely determine how they vote. Israelis vote for the parties that represent their positions on the conflict.”

He adds, “The monopoly of the conflict within political discourse in Israel remains one of the unacknowledged consequences of the Six Day War.”

Consequently, Israelis will be thinking about the future of their 71-year-old state yet again when they go to the polls in three months. As they contemplate this perennial existential issue, Israel’s occupation of the West Bank — captured from Jordan in the Six Day War — most probably will be on their minds, as will the fate of the settlements Israel has built there since 1967.

At present, the West Bank is home to about 400,000 Jewish settlers in 127 settlements. In addition, 210,000 Jews live in East Jerusalem, which Israel annexed in 1967. Seven hundred Jews are hunkered down in a Jewish enclave in Hebron. Several thousand inhabit 100 or so unauthorized outposts.

The occupation and the settlements are closely interrelated because 2.8 million Palestinian Arabs live in the West Bank, without which a negotiated two-state solution is impossible. Israel’s long-term relationship with the Arab world, the Palestinians and future as a democratic Jewish state hinge on the outcome.

In general, right-wing Israelis are comfortable with the status quo, claiming that the West Bank belongs to the Jewish people, that settlements are perfectly legitimate, and that a two-state solution would compromise Israel’s security. Left-wing Israelis generally believe that the status quo is unsustainable and will turn Israel into a binational state, that nearly all settlements should be dismantled, and that the West Bank should be an integral component of a Palestinian state. Middle-of-the-road Israelis generally fall somewhere between these polar opposites.

Netanyahu, first elected in 1996 and reelected in 2009, formally accepted a two-state solution a decade ago under US pressure on condition that a Palestinian state would be demilitarized. In practice, however, he has backtracked from this position and enunciated a hardline brand of Revisionist Zionism that essentially rejects Palestinian statehood and promotes the construction and/or expansion of settlements, which are intended to break up the territorial contiguity of the West Bank.

Several months ago, he said he supported an “autonomy-plus” or “state-minus” arrangement for the Palestinians under which Israel would retain military control of the West Bank. And in what may have been an unguarded moment, he dismissed criticism of Israel’s occupation of the West Bank as “nonsense.” Speaking to members of his Likud Party, he said, “Huge states have conquered and replaced populations, and no one talks about them.”

Netanyahu, though, has not endorsed the annexation of the West Bank. In a speech to the Knesset in 2016, he said, “My worldview hasn’t changed. I am not interested in a binational state. I do not want to turn (Palestinians) into Israeli citizens.”

Annexation is being pushed by one of Netanyahu’s coalition partners, Education Minister Naftali Bennett, who, in tandem with Justice Minister Ayelet Shaked, recently left the ultra-right-wing Jewish Home Party to form their own far-right party.

Bennett believes that Israel should annex two-thirds of Area C in the West Bank, where 400,000 Israelis and 300,000 Palestinians live, and should grant its Palestinian residents full autonomy. Bennett’s scheme is supported by Agricultural Minister Uri Ariel, a settler and a great believer in creating “facts on the ground.”

Last summer, Bennett predicted that the West Bank will be populated by one million Jews by the end of 2019. It’s a fanciful figure, but Bennett is convinced that “Judea and Samaria will be part of the sovereign State of Israel.”

Although Netanyahu is theoretically in favor of some kind of form of Palestinian statehood, he has warned Israelis that a Palestinian state in the West Bank would become a base for anti-Israel terrorism. He also has claimed that the president of the Palestinian Authority, Mahmoud Abbas, is not a reliable negotiating partner. The Palestinians accuse Netanyahu of the same deficiency.

Emboldened by the pro-Israel policy of US President Donald Trump, who has moved the American embassy from Tel Aviv to Jerusalem and cut off funding to the Palestinians, Netanyahu has firmly aligned himself with the Jewish settler lobby in the West Bank.

Last August, in what Shaked called “a strategically important decision,” a Jerusalem District Court judge, Arnon Darel, prevented the Israeli army from evacuating several homes in the unauthorized outpost of Mitzpe Kramim, which was constructed on private Palestinian land. In reaching this verdict, he legalized the outpost.

In general, Netanyahu has tolerated these outposts, but since 2017, he has forced the evacuation of settlers from several outposts.

Less than a month ago, he vowed to continue developing settlements in response to Palestinian terrorism. On December 11, following a drive-by shooting outside the settlement of Ofra, he said, “Our enemies want to uproot us from here, but …. as long as I am the prime minister, not a single Jew will be uprooted from his home. Not only will Jews not be uprooted from their homes, but we will build and add to them.”

On October 3, Netanyahu visited Ma’ale Adumim, one of the largest settlements, and declared it would “forever remain part of Israel.” He added that “thousands of apartments” would be constructed in the near future.

Ten days later, Netanyahu’s cabinet approved a proposal to build 31 homes, two kindergartens, a daycare centre and a public park in the new Hezekiah quarter in Hebron. The then defence minister, Avigdor Liberman, called the decision “yet another important milestone in the extensive activity we are leading to strengthen settlement in Judea and Samaria.”

Trump has urged Netanyahu to “hold back on settlements for a bit” and acknowledged that they have complicated the quest for peace. But in the main, he has largely turned a blind eye to Israel’s ever-growing settlement project, which will likely have a significant impact on the fate of the West Bank, the prospects for peace and Israel itself.