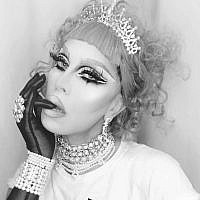 The Blogs
Matthew Nouriel
Apply for a Blog
Advertisement
Please note that the posts on The Blogs are contributed by third parties. The opinions, facts and any media content in them are presented solely by the authors, and neither The Times of Israel nor its partners assume any responsibility for them. Please contact us in case of abuse. In case of abuse,
Report this post.

As a Queer Jew, I consider it part of my mission in life to fight not only for my own acceptance and visibility but for that of others. West Hollywood (WeHo) has always been special because it unequivocally shares my values of inclusivity and acceptance. Growing up, I was made to feel that there was something wrong with me for being queer in a conservative Iranian Jewish community. As a teeneager, WeHo was the first place I went where I felt truly able to be myself. But, because of the global surge in antisemitic incidents and the apathy toward how it was being addressed,I felt it was my responsibility to attend and speak up at the West Hollywood City Council meeting on the adoption of the International Holocaust Remembrance Alliance’s (IHRA) definition of antisemitism and to share my story. With the courage of everyone that stood up to hate with me, the City Council declared solidarity with its Jewish residents. WeHo’s adoption of the IHRA definition should serve as an example to other institutions, organizations, and governments.

History has sadly proven there are a million ways to attack Jews. IHRA simplified this into barely 500 words. Its definition encompasses dehumanization, demonization, delegitimization, and other ways Jewish people can be harmed. It also tackles one of today’s most insidious anti-Jewish ideologies, whereby people espouse alleged love of Jews while, in the same breath, demonizing the State of Israel and singling it out for unique, discriminatory treatment. Let’s be honest: Jews are intrinsically linked to Israel. Those who deny this are denying us our religion, history, and connection to our culture. Of course, the Israeli government is not perfect and there is nothing wrong with criticizing Israeli government or policies, in fact we should, but a line is crossed when detractors hold Israel up to a higher standard than all other democratic nations.

In May of 2021, when Hamas fired thousands of missiles at Israeli cities, the violence against Jews did not remain confined to the Middle East. The sentiment spread across the globe and found its way to WeHo. In perhaps the most well-publicized incident, Jewish diners were brutally attacked at the local sushi restaurant, Sushi Fumi on La Cienega. As protestors drove the streets wielding a Palestinian flag and chanting “Death to Jews” and “Free Palestine” . When they came across visibly Jewish people, their verbal attacks turned physical. This violence shocked most of us in WeHo, but unfortunately, since then, antisemitism has become more and more commonplace. Vehicles sporting anti-Jewish messages have been seen roaming the streets. As a Persian Jew, I was shocked when the Iranian American Jewish Center was vandalized with swastikas and pro-Nazi graffiti. So when I heard about an opportunity to do something about it, I didn’t hesitate to show up to our City Council meeting.

While there were many people there who supported my beliefs, there were many others who did not. Sadly, those against adopting the IHRA standard denounced Israel as an “apartheid”, “racist” state, literally spewing antisemitism as defined under the definition, despite the fact that Israel or Zionism are not even mentioned within the definition itself. It would be unfathomable to tell any other minority group how to define racism against them, but these detractors still unapologetically tried to tell Jews like me what is and isn’t prejudice against us. So, although they showed up with the intention of showing why we didn’t need to define Jew hatred, they ended up proving exactly why our City Council needed this resolution.

I applaud the West Hollywood City Council’s courageous adoption of the IHRA’s definition of antisemitism as the first step in creating a safe, inclusive place for their Jewish community, but there is always more work to be done. While my past is unique, I share commonality with my neighbors through our shared fight for our own unique identities. Collectively, our stories created this city, which is respected worldwide for its openness, diversity, and respect. And with the IHRA’s definition of antisemitism now in effect, WeHo just got even more inclusive. Can you imagine the world we’d live in if every city shared these values?

About the Author
Matthew Nouriel, aka The Empress Mizrahi, is a non-binary digital activist and content creator of Iranian Jewish descent living in Los Angeles, California. In recent years, Matthew has been using their voice to passionately advocate and fight for the causes they believe in, namely LGBTQ+ rights and equality within the Iranian and Jewish communities, and combating antisemitism using their social media as a means to reach those who relate to their perspective and lived experiences, as well as engaging audiences on panel discussions and speaking engagements accross the country. They have taken on leadership roles with both queer and non queer organizations such as JDC Entwine, JQ International, Tel Aviv Institute, and most recently joined the team at JIMENA – Jews Indigenous to the Middle East and North Africa. Matthew has had articles published in JNS, The Forward, and Hey Alma, as well as being featured in Jewish Journal, Tehran Magazine, the Algemeiner, and more. In 2021 they were the recipient of the TrailBlazer Award at the JQ International annual Impact Awards.
Related Topics
Related Posts