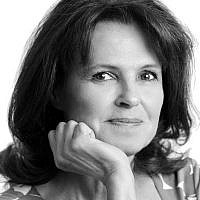 The Blogs
Monica Porter
London-based journalist and author
Apply for a Blog
Please note that the posts on The Blogs are contributed by third parties. The opinions, facts and any media content in them are presented solely by the authors, and neither The Times of Israel nor its partners assume any responsibility for them. Please contact us in case of abuse. In case of abuse,
Report this post.

There is a new 10-part series on Amazon Prime called Hunters. It’s about an eclectic team of badass people hunting ageing Nazi war criminals living incognito in 1970s America, and ‘whacking’ them. Hooray! This cold-blooded A-team is headed by elderly Jewish Holocaust survivor Meyer Offerman, played by Al Pacino. Wait a minute. In this day and age, when we are forbidden to ‘culturally appropriate’, a Jew is portrayed by a famously Italian-American actor? Yes indeed, but as you will eventually discover, if you stick with the blockbuster to the bitter end, there is a reason for this…

Early on in the series we learn that – uh-oh! – these poisonous old Nazis have been banding together and have an evil plot in hand. Can they be stopped in time?

The style of the show is often cartoonish in the way it deals with the two central issues that provide its strong red meat: anti-Semitism – both in the Third Reich sense and the subtler, more covert form in which it has always existed in America and elsewhere – and the US government’s cynical embrace of former Nazis who could assist in the Cold War against the Soviet Union. There are funny one-liners. Cheesy little ‘commercial breaks’ and parody game-show segments are interspersed with the action, in order to hammer home an opportune message. We are constantly reminded that, after all, this is unashamed entertainment à la Hollywood.

But there are also beautifully simple and touching lines which come from the very heart of the series whose creator, David Weil, is himself a Jew and the grandson of a Holocaust survivor. In one scene Offerman is talking to his grandson Jonah, who has been recruited to his team but harbours lingering doubts about the morality of their operation, and tries to explain why he is compelled to unearth and take down the heinous old Nazis who continue to endanger the world: ‘I became the night, so that the day would live. That is the mark of a hero, Jonah. Not the one who does what is right, but the one who does what is necessary.’

And there is the moment when Offerman goes to visit celebrated Nazi-hunter Simon Wiesenthal, played by Judd Hirsch, who does things by the book and disapproves of Offerman’s taking the law into his own hands. ‘The Nazi hunter is the prime of our people,’ Wiesenthal tells him. ‘But this is a profession of angels, my friend. And angels do not get blood on their wings.’ To which Offerman replies: ‘Perhaps the age of angels is over.’

These are big issues about the perennial pull between, on the one hand, morals and laws, and on the other, what we all yearn for: justice.

Here and there Hunters plays fast and loose with the facts of the Holocaust, and its depictions of what happened at Auschwitz don’t necessarily stand up to historical scrutiny. Predictably, this has led to strident criticism from the Auschwitz Memorial and from Jewish organisations. They claim that such fictionalising only gives ammunition to Holocaust deniers. But the truth is that Holocaust deniers don’t need ammunition. If they can deny the Holocaust even in the face of the documentary film footage recording it – and the titanic archive of other evidence – what’s an Amazon TV production more or less to them?

I have to admit that towards the end of the series, it does go crazily over-the-top with its fictionalising. For instance, we all know that the Nazi rocket scientist Werner von Braun, who after the war helped NASA put a man on the moon, did not fake his death from cancer only to be bumped off by a bunch of Nazi-hunting vigilantes. And if you think that plotline is far-fetched, wait till you get to the denouement in Episode 10.

But the most vital element of Hunters, the foundation on which the series is based, is strongly rooted in historical fact. After the war a group of Jews composed of Holocaust survivors and members of the British Army’s Jewish Brigade spent years tracking down and secretly executing scores of Nazi criminals who had gone unpunished by a justice system which couldn’t cope and simply gave up. Some were strangled, some hanged, others met their end in ‘car accidents’. The world may have moved on, but this was still unfinished business for those real-life Nazi-hunters. They did what was necessary. And personally, I will always be on the side of the avenging angels…with or without blood on their wings.

About the Author
Monica Porter was born in Budapest and emigrated with her family to the US after the 1956 Revolution. Living in London since 1970, she is a freelance journalist who has contributed to countless British newspapers and magazines and written several books - her latest, about youngsters involved in anti-Nazi resistance in wartime Europe - will be published in April 2020.
Comments