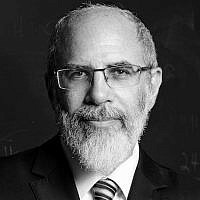 The Blogs
Henry Abramson
Apply for a Blog
Advertisement
Please note that the posts on The Blogs are contributed by third parties. The opinions, facts and any media content in them are presented solely by the authors, and neither The Times of Israel nor its partners assume any responsibility for them. Please contact us in case of abuse. In case of abuse,
Report this post. 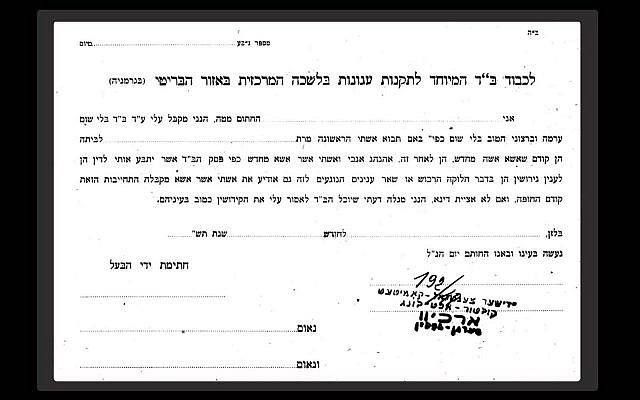 JTA — It is jarring to see a Star of David placed between the Hebrew transliteration of the words Bergen-Belsen, the notorious Nazi concentration camp where 37,000 Jews, including Anne Frank, were murdered – and on a marriage contract, no less.

But there it was, a small bureaucratic form, typed in Rabbinic Hebrew, meant to address the heartbreaking implications of marrying in the aftermath of genocide.

When British troops liberated Bergen-Belsen in April 1945, they found 10,000 emaciated corpses scattered about the prison grounds, a horrific vision of apocalyptic proportion that has been memorialized in photographs and newsreels from the period. Many of the some 60,000 inmates still alive were seriously ill — about 13,000 died post-liberation, according to the U.S. Holocaust Memorial Museum.

Yet within months, the site became the epicenter of a furious revival of the Jewish population, as survivors engaged in what historian Atina Grossman called “biological revenge”: Jews affirming life in the most elemental manner by marrying and bearing children.

By 1948, according to Grossman, the displaced persons camps (of which Bergen-Belsen was the largest) witnessed a birth rate of 36 children per 1,000 Jewish women, approximately seven times the rate for German women. The children were called “moshiachskinder,” meaning children born as part of the messianic redemption of the world.

The Star of David found on a Bergen-Belsen ketubah is an expression of that life-affirming impetus. Like the famous Survivor’s Talmud, a full edition of the Widow and Brothers Romm Talmud published in 1948 in Heidelberg on the very same presses that once produced Nazi propaganda, Jewish Holocaust survivors refused to grant Hitler a posthumous victory: In a place of terrible death, they would create life.

I was asked to present the story of resurgent Jewish life in the DP camps to the Project Witness Educators’ Conference on Women in the Holocaust, a remarkable annual gathering of teachers in Jewish schools to share ideas and network with other educators, many of whom struggle to teach the Holocaust in haredi Orthodox institutions that ban the use of internet-based resources.

But when I came across a terse prenuptial agreement, my blood ran cold.

The DP camps in Germany and Italy contained some 300,000 Jews, most of whom emerged from the death camps before the Nazis could complete their Final Solution. Many married before the war could not determine whether or not their spouses were still among the living. Neither divorced nor widowed, the survivors remained “chained” to their former husbands and wives, unable to remarry under Jewish law until the fate of their spouses could be ascertained.

The situation for such women, known as “agunot,” was more dire than that for men, as women are prohibited from remarrying if their husband has not agreed to a divorce or if there is no proof that he has died. So the rabbis of the DP camps employed the full arsenal of Talmudic logic to declare missing husbands dead and allow their widows to remarry.

The document I found, however, was not for women. It was something I had never seen before: a sobering prenuptial agreement for a prospective groom who wishes to remarry after his wife disappeared in the maelstrom of the Holocaust.

Addressed to the “Honorable Court of Justice Established to Address Agunot in the Central Office of the British Zone (in Germany),” the form has the groom agreeing to abide by the dictates of the court should his first wife somehow emerge from the ashes of the Holocaust. The text reads in part: “I, the undersigned, accept upon myself without any duplicity and with good will, without being coerced in any way, that if my first wife returns home …”

A blank space is reserved for the groom to enter the name of the missing woman.

“I, and the woman that I will marry, will abide by the ruling of the Bet Din, whether it requires divorce and the division of assets, or any other matter,” the document says.

This post-Holocaust prenuptial agreement, which involved obligation to the presumed dead as well as the living, required the groom “to inform my [subsequent] wife of this obligation prior to the chuppah.” Finally, the groom affirms that “if I fail to obey the dictates of the Bet Din, behold I accept that the Bet Din may nullify my [subsequent] marriage, as the court sees fit.”

One can only imagine the tearful conversations between groom and bride, poised on the cusp of their blissful future together, as they reviewed the implications of this painful document. Hope inescapably mixed with tragedy, rebirth entwined with death. The emotional heroism of these survivors must have been overwhelming.

As a historian, however, I reflect also on the fact that this artifact in the YIVO Archives is not a personalized, handwritten document that reflects the misfortune of a single family. It is rather a form letter, composed and reproduced for repeated use. It is the blank spaces, left unmarked, that provide silent witness to the thousands upon thousands of unspoken tragedies extending well beyond the war’s end.

I have the honor of working in a college environment where many of my young students make the transition to the sacred marriage canopy. I doubt that many of them contemplate the fragility of life – that is a privilege that seems to be reserved for the elderly. But documents like this post-Holocaust prenuptial agreement illustrate how as Jews we must appreciate the drive of these elderly, after unspeakable tragedy, to nevertheless survive and endure.