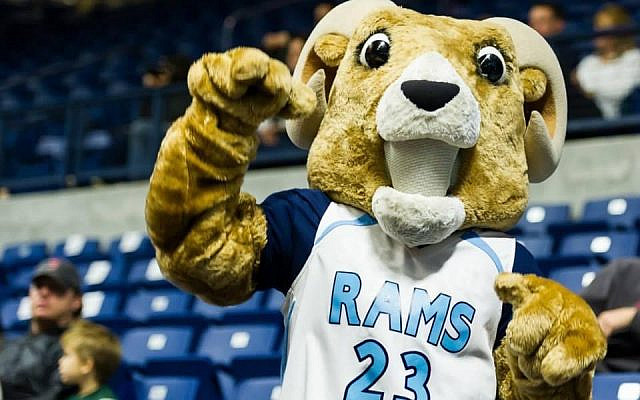 “Where’s Mike? Has anyone seen Mike?!” I repeated this refrain throughout the night until the frustration ultimately led me to exclaim, “If you see Mike, keep him away from me because I’m going to kill him!” Never would I have to regret my words more than at this moment.

The night in question was Midnight Madness at the University of Rhode Island during my senior year. Mike and I were both the URI mascot, Rhody The Ram. Normally, we took turns mascotting at the games. Whether it was football or basketball, we would trade off events. But this night was to be different. For the first time, the men’s and women’s teams would be practicing together.

Mike and I held a planning meeting the evening before Midnight Madness. In honor of this event, we intended to do a mascot routine, both in costume. The plan was to put a pink bow on one of the Rhody outfits and dance around as mascots do. As we completed our preparations, Mike mentioned he was going out with his friend Fitz on his way to the event. He assured me he would be on time.

The night of Midnight Madness finally arrived. If there’s one thing that’s true about Mike, he was born 15 minutes late, so I expected the normal tardiness. But as a half-hour turned into an hour, I began frantically searching the complex for him. “I’m going to kill him!” I exclaimed.

To this day, I can remember how the fireman looked walking towards me in the hallway. Fire and police personnel are standard at these types of gatherings, so at first, I thought nothing of it. But it was odd that he looked like he had just come from an emergency call. He stopped me and said, “There’s been an accident.”

On their way to the event, Fitz, took a corner too fast and wrapped the car around a tree. Mike, who walked away with cuts and bruises, didn’t make it to Midnight Madness. Fitz never made it anywhere again.

The following week was a bit of a blur. It was Homecoming, and I was to be crowned Homecoming King at the football game. As it turned out, the game and Fitz’s funeral overlapped. I chose to travel to Massachusetts to pay my respects and be there for Mike.

At that point in my life, I was a bit lost as to what I would do following college. I was vacillating between pursuing a career in radio and studying to be a rabbi. Fitz’s funeral proved to be a decisive moment in my journey.

I never had the chance to really get to know Fitz. We were only acquaintances through Mike. But at the funeral, the eulogies made clear to me the depth of who we had lost. In his short time, he had already done significant volunteer work around the world and was planning to be a minister. I was deeply saddened to see someone having done so much good cut off before his prime.

As the memorial was winding to its close, the head of the URI Catholic Center rose to speak. He remarked, “I have a lot of faith in the student body today because the Homecoming King, who’s meant to be crowned right now, is here to pay his respects.”

I learned more in that week about what’s of real value to us all than possibly any other time in my life. These events reinforced for me that things like being the Homecoming King are ephemeral events that have little lasting impact. But doing the right thing, supporting friends and family in their hour of need are timeless.

I also learned the value of speech and how saying less is always more. We don’t need to share every frustration that’s on our mind. It’s better to focus our speech, as the head of the Catholic Center did, to help others see what’s of ultimate value.

I also learned that spiritual leaders can take a moment of tragedy and turn it into the spark of transformation. It was these insights that convinced me to be a rabbi.

Thankfully, I’m still in close contact with Mike. And thanks to the model I saw in Fitz, I’m continuing the work in his stead.