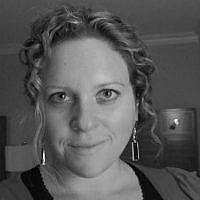 The Blogs
Yehudit Jessica Singer
Apply for a Blog
Advertisement
Please note that the posts on The Blogs are contributed by third parties. The opinions, facts and any media content in them are presented solely by the authors, and neither The Times of Israel nor its partners assume any responsibility for them. Please contact us in case of abuse. In case of abuse,
Report this post. 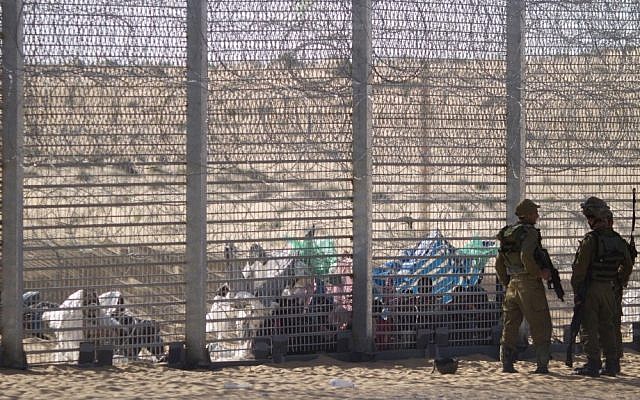 Illustrative: Israeli soldiers stand guard on Tuesday as Eritrean asylum seekers sit on the ground behind a border fence, after they attempted to cross illegally from Egypt into Israel. (AP/Ariel Schalit)

A plump, curly-haired woman greeted me through the bulletproof window at the booth.

“Good morning, welcome to the United States Consulate. How can I help you today?” she said with a perky, Midwestern accent.

Her overall friendly demeanor made it obvious that she wasn’t Israeli; she was surely a member of the US Foreign Service sent by the US Department of State.

I was there to pick my renewed passport, a painless process that required me to fill out some papers and pay a fee. Most people would take the envelope and go, but this time, there was something emotional about it. I began to tear up, and then laughed at myself, feeling silly. I wanted to go on about how I — 14 years after making aliyah — still feel proud to be American, still think in Fahrenheit, and still check my blind spot when I drive.

Instead, I said: “I’m really grateful for this. Thank you.”

I imagine perky lady was taken off-guard by such an emotional response to a bureaucratic operation, but for me, this time, it was a privilege and an honor. I am a proud citizen of two democratic countries and a holder of two passports that open doors to the world, whether it be for business, leisure, or if need be, for safety. In the historical continuum, how many people, let alone, Jews, have had that freedom?

My emotional reaction that day was more likely in response to a local parlor meeting I recently attended, to hear a presentation given by Havtum, a young Eritrean man.

Havtum has lived in Israel for the past nine years, but unlike me, my family, and every single person I know, he doesn’t have any documents. No passport, birth certificate, visa, or any papers that avail him of any opportunities for advancement or movement. He is a refugee who has been through hell and he does not have the freedom to hop on a plane and go where he pleases.

He told his harrowing personal story about growing up in Eritrea with his parents and four siblings, living through the war of independence from Ethiopia, and being hustled by human traffickers who snuck him into four different countries with the promise of a better life. At a certain point, after paying $5,000, he was told he would be brought into Libya for work, but in fact, was taken to Egypt where he was sold to Bedouins who snuck him into Israel through the fenced border. He is one of the luckier ones, in that he was not tortured along the way, as many others are. Once in Israel, he was given a bus pass to South Tel Aviv, and eventually made it to Jerusalem, where he now lives and works.

This is not a story from the Bible or some science fiction; this actually happened to someone I met, who walks the very same streets as you and I.

Currently, there are about 2,500 other refugees like Havtum in Jerusalem alone; 38,000 in Israel total. Many of them are currently being threatened with expulsion from Israel to an unknown third country (widely believed to be Rwanda), with no guarantee of safety. (It should be noted that since Israel built a barrier with Egypt in 2013, the number of African asylum seekers coming in has dramatically decreased. There were no recorded entries in 2017.)

Even in modern-day society, democracy and freedom are not universal guarantees. There are still many being enslaved, trafficked, abused, and persecuted. Sure, we can take the easy route and expel these people, send them away — anywhere away from “here” — and make them someone else’s issue. We can also decide as a country to take a small part in what is currently the largest refugee crisis since World War II. This would mean setting up a system by which asylum seekers can submit applications without waiting days in line and know that these applications will receive serious review. We can decide to grant those who are already in our country an official temporary status, allowing them to work and receive basic services around the country, so their population is not a burden on any particular neighborhood. Or, if we determine that Israel cannot absorb some of the asylum seekers, we must help secure a safe, sound integration plan in an ally state.

At Passover, we sit at the Seder table and recite the verse “In every generation, each person must see himself as if he himself had come out of Egypt.” We eat the bitter herbs and point to the bread of affliction, the poor man’s bread that lays on the seder plate looking bland and deflated.

The primary obligation is to tell it to our children lest they forget. We were there. We were slaves. We were persecuted and oppressed, but we were liberated and saved. We built a nation, communities, organizations for foster care and family services, gemachim, the ADL, soup kitchens, battered women’s shelters, the Wiesenthal Center, and much more. We do so well at taking care of ourselves. Yet, we should ask ourselves and our seder guests: what does our liberation and freedom mean in today’s society, when there are now others who are being persecuted and oppressed?

I am reminded of Rabbi Jonathan Sacks’ essay “Building a Society of Freedom”, which appears in The Jonathan Sacks Haggada. There, he writes:

Through reflection on the experience of their ancestors in Egypt, the [ancient] Israelites would remember what it feels like to be on the receiving end of persecution, and thus develop a sense of solidarity with the poor. Their task in the Promised Land was to build a counter-Egypt, an antithesis of empire, an alternative society established on the principles of tzedaka and mishpat, distributive and retributive justice, and the covenantal virtues of hesed and rahamim, kindness and compassion. The God of freedom asks nothing less of His covenantal people than that they shape a social order of universal freedom, in which the basic requirements of human dignity are available to all.

I realize that there is tremendous controversy over whether to accept and absorb the asylum seekers or expel them. There are questions of how to stretch already-limited resources of the state, if our tax shekels should be allocated to non-citizens, whether to give them jobs, how to ensure safety, and many more. But as we celebrate Passover and the 70th year of Israel’s independence, it’s time to embrace the concepts of tzedaka and mishpat. It’s time to think about how to help the persecuted refugees of today — those without papers who have nowhere to go, and have been exploited in every way.

Let us take a few minutes at our seders and talk about this issue, discuss the moral implications of expelling people in need without any safety net in place.

B’chol dor vador, chayav adam lirot et atzmo k’ilu yatza m’mitzrayim. — In every generation, each person must see himself as if he himself had come out of Egypt.

If it were you — persecuted and exploited once again — what would you want others with resources to do to help? What can we do to bring about redemption for ourselves and others today?