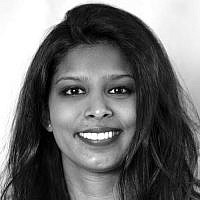 The Blogs
Sarah Victor
Apply for a Blog
Advertisement
Please note that the posts on The Blogs are contributed by third parties. The opinions, facts and any media content in them are presented solely by the authors, and neither The Times of Israel nor its partners assume any responsibility for them. Please contact us in case of abuse. In case of abuse,
Report this post.

I was born and grew up in the United States. My parents emigrated from India and we frequently spent our vacations there when I was younger. My family’s connection to two cultures, found on opposite sides of the globe, meant that my concept of home has necessarily evolved throughout my life. This led to a curiosity about how other people, with varied and diverse backgrounds, navigate their own identities.

When I was in high school, I read a few books on Jewish history. The resiliency of the Jewish people, through the hatred and discrimination repeatedly leveled against them, struck me as impressive. A few years later, in college, I was privileged enough to participate in an internship based in Jerusalem. This led to further discovery about the Jewish connection to Israel.

Over the last 18 months, I’ve watched with horror as violent attacks were directed towards Jewish communities in the United States: the shooting in Pittsburgh in the Tree of Life Synagogue, the Poway shooting, and more recently the attacks in Jersey City and Monsey. All this in addition to the harassment on the streets, the recurring threats targeting Jewish centers and places of worship, the incidents on college campuses, and the vandalisms of Jewish memorials including cemeteries. As I’ve worked to understand where this hatred comes from, I have found that the Jewish connection to Israel has often been cited as a factor motivating such violence. In fact, I have personally witnessed situations where my Jewish and Israeli friends, outside of Israel, have been the target of demeaning statements and behavior exclusively by virtue of mentioning their connection to Israel. Taken aback by the level of vitriol they face, my Jewish friends have informed me that this is, unfortunately, not uncommon.

Growing up, I learned about India’s colonial past in the stories I heard from my parents and my Patti (grandmother). My Patti talked about her community’s involvement in the famous Salt Satyagraha, an integral event in India’s quest for nationhood. Being aware of this history, and my family’s connection to it, attuned me to other stories of conquest and freedom as I traveled the last few years to study legal systems around the world. I spent semesters in Italy, Israel, Japan, the Netherlands, and China, before once again spending a semester in Israel. My journey began in Italy, the former seat of the Roman Empire – responsible, of course, for the start of the Jewish diaspora. It concluded in Israel, a country that once again represents the Jewish people’s presence in the land from which they had been scattered nearly two millennia before.

While the changing contours of power have inevitably shaped the definition of home for many, I am keenly aware that home is based on the choices we make as individuals. My parents made the choice to start their family in the United States, and my life as I know it would not exist had they made a different choice. Listening to my Jewish friends talk about their connection to Israel, I have learned that there are different lenses through which they view their relationship with Israel. For my friends who were born or grew up there, Israel is often the only home they have ever known. But I have also met people who decided to make Israel their home. Arriving there from places as diverse in culture and geography as Ukraine, the United States, and Uruguay. Their reasons for moving to Israel are varied. Some are motivated by religious belief, while others simply see Israel as offering them an opportunity for a better life – be it an escape from anti-Semitism or for any other personal reason.

While my connection to India, as a child of immigrants, cannot compare perfectly to the plethora of Jewish experiences that exist, it does provide me a lens with which to view the nuanced relationship between ethnic and national identity. It helps drive my desire to understand the many ways in which I know my Jewish friends bear the burden of hatred in ways that I have not.

Additionally, I believe that my experience offers a reality check on how we, as a society, should view the Jewish connection to Israel. If we claim to have even a modicum of respect for our Jewish friends and neighbors and their identity as Jews, we need to also respect their historical, religious, and cultural ties to the land that forms Israel.

My own ties to India have never been questioned, despite my lack of citizenship or residence in that country. So why should the Jewish connection to Israel be dismissed and delegitimized? If we truly care about protecting our Jewish friends and neighbors – as we should – we must be conscientious in our responsibility to call out any double standard, whether that be the effort to wrench them from their roots, or the suggestion that they are responsible for the violence perpetrated against them. This should also include situations when events in the state of Israel are used as justification for the violence against diaspora Jews.

I think it would be beautiful for us to build a bridge into the future that includes the pursuit of justice, as well as the creation of spaces for our Jewish friends and neighbors to write their own stories and figure out their own sense of home in relation to Israel, unfettered by the burden of prejudice.

Doing so will require a humble openness to re-evaluating ourselves in the context of our changing world. Will we care enough to think more deeply? Will we be willing to put ourselves in the shoes of our Jewish friends and neighbors to understand the physical and verbal threats they increasingly face? And will we be courageous enough to do something about it no matter how difficult?

About the Author
Sarah Grace Victor is a publishing adjunct at The MirYam Institute. She is a graduate of Cornell University's School of Industrial and Labor Relations and Temple University Beasley School of Law. She spent additional semesters at Tsinghua University in Beijing, China, and Tel Aviv University. Sarah has also previously studied or worked in Israel, the Netherlands, Japan, and Italy during law school. This experience in international law informs her perspective in support of Israel. Sarah has been involved in founding TAMID: Israel Investment Group at Cornell and as an Emerging Professional at the Philadelphia-Israel Chamber of Commerce.
Related Topics
Related Posts
Sarah Victor
Comments