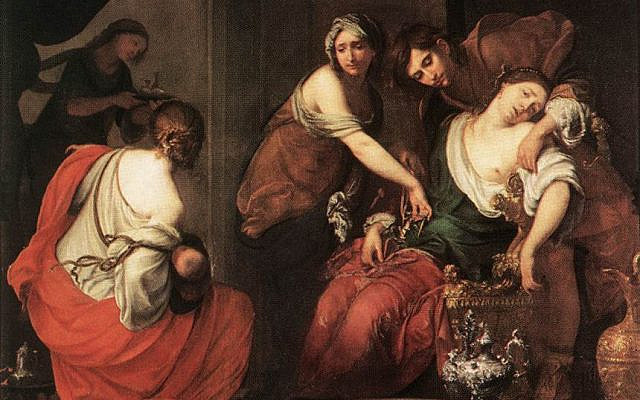 The birth of Benjamin and the death of Rachel. Oil painting after Francesco Furini. Furini, Francesco, 1603-1646.

What was the specific complication of pregnancy that caused Rachel’s demise?

Rachel’s tragic death during the birth of Binyamin is a defining moment for the family of Yaacov. The text itself provides little detail of the specific cause of her death during labor, however given historical and modern data of maternal mortality risks, a convincing picture can be reconstructed of a tragic complication of uterine hemorrhage.

The text paints a harrowing picture. Rachel’s labor became very difficult, compelling her midwife to inform her that she should not fear as “the child was a son” (35:16-17). Whether she intended the information to be inspiring or consoling, nonetheless, this detail provides an intriguing insight into her labor complications. The fact that the gender was apparent means that either the child was already delivered at this time or it was in breech presentation (feet first) and only the lower torso had been delivered at that moment. This nuance combined with the fact that Rachel’s labor and tribulations continued provide compelling clinical information. Either picture does not bode well for Rachel.

Delivering a baby in breech presentation is notoriously dangerous for both mother and child for a variety of reasons. In particular, the widest point of a baby are the shoulders, which are less flexible to fit through the birthing canal when delivering feet first. This might explain how the gender of the child was apparent yet her labor was not over.

Alternatively, Binyamin was already birthed, however the placenta remained. Every delivery consists of two parts. The primary and most difficult part is the delivery of the baby. The second delivery is the placenta, but is no less important. The placenta is an amazing organ. It insinuates into the wall of the uterus for nine months and is securely fastened in place by innumerable blood vessels and vascular chambers. As the uterus contracts to force the child through the birth canal, the placenta is gradually peeled off the wall of the uterus as would a sticker pasted to the side of a deflating balloon. As the placenta is delivered it tears away from the uterine wall and ruptures the uterine blood vessels that once connected it. This results in a lot of bleeding.

Following an uncomplicated delivery the uterus is compelled by maternal hormones to contract very hard. This contraction accomplishes multiple tasks at the same time: it detaches the placenta from the uterine wall, forces the placenta out, and compresses the uterine wall vessels closed, tamponading any residual bleeding. Uterine hemorrhage occurs when there is incomplete delivery of the placenta, inadequate postpartum uterine contraction (uterine atony) or when there are exceptionally deep tears within the uterine wall (placenta accreta). In the modern world of medicine, these complications are treatable.

The horrific consequence of untreated uterine hemorrhage is gradual exsanguination (fatal loss of blood) as the mother will gradually grow weaker and tired until eventually perishing.  After learning that her child was a son, Rachel’s condition continues to worsen as she succumbs to complications of pregnancy and with her last breath names her child “son of my suffering” (35:18), painting a picture of weakness and despair. Given the fact that her condition continues to worsen and the fact that Binyamin survives, makes breech presentation less likely, although certainly not excluded. The most likely complication given this description and modern obstetric data places uterine hemorrhage as the cause of death.

In the modern world, the risk of death from pregnancy and labor depends on a woman’s access to medical care, ranging from 11 to 462 per 100,000. This represents approximately 295,000 deaths in 2017 [1]. These contemporary numbers are sobering, yet historically the rates of death ranged from 1250 to 2940 per 100,000, accounting for approximately 20% deaths of fertile age women [2]. Uterine hemorrhage is the most common severe complication of pregnancy and the primary cause in nearly 50% of all adverse pregnancy outcomes in young women [3] and the direct cause of nearly a third of all maternal deaths worldwide [4].