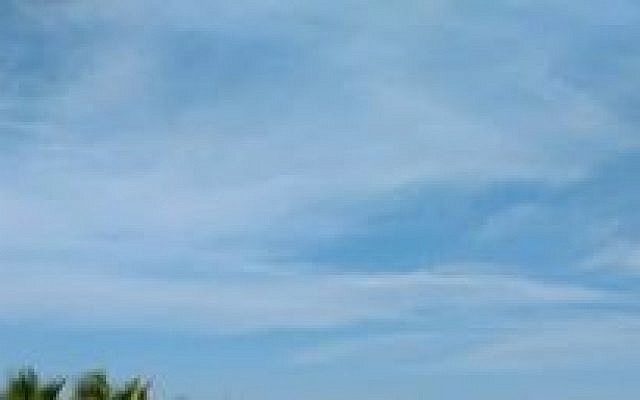 The manna is described as a type of bread in the Torah, yet it does not grow from the ground so “…HaMotzi Lechem Min HaAretz”, “…Who brings forth bread from the ground” which we usually say before eating bread would not be the right bracha.

Rav Naḥman said: Moshe instituted for Israel the first blessing of Birkat HaMazon, “…HaZan et HaKol”, “…Who feeds all”, when the manna descended for them from heaven.

From this Gemara, it sounds like B’nai Yisrael recited Birkat HaMazon after they ate the manna but we are still left with the question: Did they also make a blessing before they ate it and if so, what was the blessing?

In Shmot 16:4, God said to Moshe, “I will rain down ‘lechem min hashamayim’, bread for you from the sky, and the people shall go out and gather each day that day’s portion—that I may thus test them, to see whether they will follow My instructions or not.”

Rav Ovadia Yosef in Yechave Daat quotes a few different sources for if there was a bracha and if so, what the bracha may have been:

Rabbi Yehuda HaChasid (Yehuda ben Shmuel of Regensburg) wrote in Sefer HaChasidim that the bracha for manna is “…HaMotzi Lechem Min HaShamayim”, “…Who brings forth bread from Heaven.” Eliyahu HaNavi said this bracha as well when he ate Ugot Retzafim, coal baked cake that was given to him by the angel (Melachim I, 19:6).

Rabbi Tzvi Elimelech Spira (of Dinov) in his work Bnei Yisaschar, wrote in the name of Rabbi Menachem Azariah de Fano (Rema MiPano) that in the future, at the Feast of the Leviatan (Sea Monster) described in Masechet Bava Batra 74b, the Leviatan will be slain and its flesh served as a feast to the righteous in the World to Come. The beautiful skin will be used to cover the tent where the banquet will take place. There they will celebrate by eating manna that was saved in a container by Yoshiyahu (Talmud, Yoma 52b) which is called bread.

Rema MiPano is referring to the manna that was saved in Shmot 16:32-34:

Moshe said, “This is what God has commanded: Let one omer of it (the manna) be kept throughout the ages, in order that they may see the bread that I fed you in the wilderness when I brought you out from the land of Egypt.”

And Moshe said to Aharon, “Take a jar, put one omer of manna in it, and place it before God, to be kept throughout the ages.” As God had commanded Moshe, Aharon placed it before the Ark of Testimony for a safe keeping.

When the B’nai Yisrael saw it (the manna), they said to one another, “What is it?”—for they did not know what it was. And Moshe said to them, “That is the bread which God has given you to eat.

Based on the verses above that call the manna bread, Rema MiPano said that the bracha should be “…HaMotzi Lechem Min HaShamayim”, “…Who brings forth bread from Heaven.

The Mekubal, Rav Yisrael Dov took a different generation and said that they didn’t make a bracha on the manna at all as it is called “Lechem Abirim.” As it says in Tehillim 78:23-25:

He commanded the clouds from above and opened the doors of heaven, and rained down manna upon them to eat and gave them of the corn of heaven. Man ate “lechem abirim”, the bread of angels: He sent them provision to the full.

In Parshat Behaalotcha, when B’nai Yisrael complain about not having meat, fish or vegetables, they say (Bamidbar 11:6) “But now, our soul is dried away, there is nothing; we have nothing to anticipate but the manna.”

According to the Talmud, Yoma 75b they were saying: Eventually this manna will expand in our intestines. Is there any such thing as a creature born from a woman who takes food in but doesn’t need to go to the bathroom?

Rabbi Yishmael taught: Do not read the word as “Abirim”, strong ones or angels, read it as “Eivarim”, limbs. The manna is absorbed in the 248 limbs of the body.

The Mekubal, Rav Yisrael Dov’s approach is that if there is no waste in the food then it would technically not need a bracha at all and maybe the bracha  “…HaMotzi Lechem Min HaShamayim” presented by the Rema MiPano is only for the Seudat Livyatan, but was not recited by B’nai Yisrael. However, Sefer HaChasidim states that B’nai Yisrael did recite the bracha “…HaMotzi Lechem Min HaShamayim” on the manna as the Rema MiPano had mentioned.