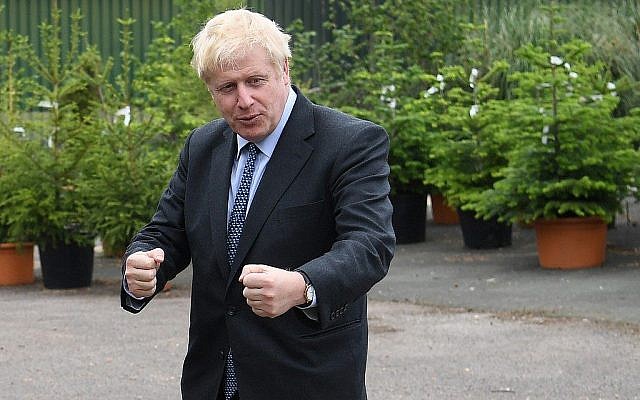 As expected, Boris Johnson has been selected to replace Theresa May as leader of the Conservative Party and as the 77th Prime Minister of the United Kingdom. If Johnson is to be believed, he will take Britain out of the European Union by the end of October, deal or no deal – and right now, no deal is the option that seems to be most likely following three years of failed negotiations between the British government and the EU.

I believe that the British public made the wrong decision in deciding to leave the EU, but made it they did. It is possible that a second referendum today, with much more information about the implications of leaving the EU, could bring about a different result, but that would be harmful to the democratic system. And all those remainers who were sure that the vote would go their way, and didn’t bother to exercise their right to vote, can do nothing more than look themselves in the mirror  and reflect on the irresponsibility of their actions.

It is time for Britain to move on, to mend the tarnished image of the way politics is done, to repair internal party divisions and get back to the relatively stable management of their national affairs, an understated politics that has, for so long, been an endearing characteristic of the British political system with no written constitution as such. (I never understood why, growing up in the UK of the 1960s and 1970s, we studied British politics at school under the title of British Constitution when, as in Israel, no such written constitution exists.)

Johnson is an unusual character for a British Prime Minister. Unlike so many other political leaders he does not excel in British understatement. Like his great friend across the pond, President Trump, he says it as it is and, more often than not, lets slip statements when, in retrospect, it would have been better to have remained silent. Perhaps as prime minister he will listen more to his civil servants, the Sir Humphreys of the British political system who are nothing if not diplomats and careful with their utterances – especially in a world of social media where everything is disseminated within minutes of their utterance. Once stated, no amount of apologies or commentary or attempts to change the meaning will alter the original impact – and Boris, in his former roles as the mayor of London and as British Foreign Minister, has had his share of statements of this kind.

The election of Johnson came down to a choice between him and the more reserved Foreign Minister Jeremy Hunt. and was a decision taken, over the course of a month, by all paid up members of the Conservative Party. In the past, leadership elections have been limited to the Conservative members of Parliament – such was the method adopted when John Major replaced Margaret Thatcher in 1990, David Cameron replaced Michael Howard in 2005, and Theresa May replaced Cameron as recently as 2016. But in an attempt to give the impression of democracy, the final ballot was opened up to all party members. But even this is questionable given the fact that the voting was not just for a leader of a political party but one who will automatically become the prime minister of the country without a general election taking place.

Reading between the lines, what drove the choice of Johnson, even more than Brexit, was the fact that he is seen as the best candidate to beat Jeremy Corbyn in the next general election whenever that will be held. Given the minority government status that the Conservatives enjoy today – thanks in no small part to Theresa May’s decision to hold a general election in 2017 – that may be sooner than expected.

He will, of course, be helped by the fact that Corbyn and the Labour Party have sunk to their lowest ever popularity ratings, despite the failure of the Conservative government to get their own house in order over Brexit. This has little to do with the ongoing debate and headlines about anti-semitism within the Labour Party, which probably few British citizens care about and probably are of the opinion that it has grabbed far too many headlines – but because Corbyn and the radical groups that have taken over the leadership of the party with him, are highly unpopular within the broader British public, including the hundreds of thousands of lifelong members of the Labour Party who desire a more centrist social democratic form of government. They may not end up voting for a Conservative party under Boris Johnson, but they are more than likely to withhold their vote from a Labour Party under Jeremy Corbyn.

Johnson will continue the good relations which have always been held between British prime Ministers and the State of Israel. Despite the sometimes ambivalent relationships between the two countries, especially over the issue of Palestinian statehood, Labour Prime Ministers such as Harold Wilson, Tony Blair and Gordon Brown, along with Conservative Party leaders such as Margaret Thatcher, John Major, David Cameron and especially Theresa May, have all had excellent relations with  both Israel and the Jewish community in Great Britain. On hearing of her decision to step down, the Chief Rabbi of Great Britain, Ephraim Mirvis, praised her commitment to the Jewish community and it is something which can be expected to continue under a Johnson led government.

Should Corbyn ever make it to No. 10 Downing Street, this would  cause an unprecedented tension (and that is using a British understatement) between the two governments. Given the nature of anti-semitism within the Labour Party, more of which is being discovered on almost a daily basis, it is more than likely that much of the traditional Jewish vote for the Labour Party,  the party which has traditionally represented minority interests and the rights of ethnic and religious groups on an anti-racist platform, will completely evaporate – although there is no significant impact of the Jewish vote (the entire community is little more than 270,000 people) in the way that it can play out in the United States.

Johnson will be Britain’s 77th Prime Minister. His first few months will be dedicated to completing the Brexit soap opera and in endeavours to re-unite the Conservative Party under his leadership. The democratic process, so different in nature to the one we have in Israel, has spoken and we wait, with bated breath to see how, a showman such as Boris – in line with his counterpart in Washington – will manage the affairs of State in the coming years.

About the Author
David Newman is professor of Geopolitics in the Department of Politics and Government at Ben-Gurion University of the Negev. BIO: David Newman holds the University Research Chair of Geopolitics at Ben-Gurion University, where he founded the Department of Politics and Government, and the Centre for the Study of European Politics and Society (CSEPS) , and served as Dean of the Faculty of Humanities and Social Sciences from 2010-2016. Professor Newman received the OBE in 2013 for his work in promoting scientific cooperation between Israel and the UK. From 1999-2014 he was chief editor of the International Journal of Geopolitics. David Newman moved to Israel from the UK in 1982. In 2017 he was selected as one of the 100 most influential immigrants to Israel from the UK. His work in Geopolitics focuses on the changing functions and roles of borders, and territorial and border issues in Israel / Palestine. For many years Newman was involved in Track II dialogues between Israelis and Palestinians.He has additional research interests in Anglo Jewish history, and is a self declared farbrent Tottenham Yid.
Related Topics
Related Posts
David Newman
Comments