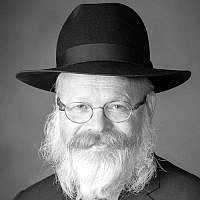 The Blogs
Avraham E. Plotkin
Apply for a Blog
Advertisement
Please note that the posts on The Blogs are contributed by third parties. The opinions, facts and any media content in them are presented solely by the authors, and neither The Times of Israel nor its partners assume any responsibility for them. Please contact us in case of abuse. In case of abuse,
Report this post.

A Jewish mother walks her son to the school bus on his first day of preschool. “Please behave, sweetie pie,” she says.

“Darling dear, take good care of yourself at school and think about your mother who is waiting for you! After school do not forget lovie dovie to come right back home on the bus., Remember, honey bunny, your Mommy loves you a lot!”

At the end of the first day, the bus returns. The doting mother runs to her son and hugs him.

“So, what did bubbeleh learn on his first day of school?”

“I learned that my name is David…”

Many people wonder why there is such a big deal made out amongst the Jews over baby naming ceremonies.   Isn’t a name given to a child just some random choice made by the parents or guardians, pulling it out of the hat? What is the cause of great celebration?

The Kabbalah explains that the Hebrew name chosen is by no means random. It is an expression of the very essence of the soul of the child. The given name was always the name of the soul from the very beginning of its existence, way before its interaction with the physical body.

In other words, the baby naming is not superimposing a strange name on the soul, but rather an act of restoring the correct ancient soul name that always was. Hence, the baby naming ceremony is a very significant event celebrating an auspicious moment in which the newly born child reunites with its old soul name and identity from time immemorial.

But how can we be certain that the parents or guardians, will successfully find this original name? How can mortal humans know the name that intrinsically belongs to this soul? The Kabbalah teaches that parents or guardians are granted during the baby naming process prophetic powers to find the correct name.   For a moment, their minds are mystically aligned with the root of this child’s soul and the name is revealed to them. Parents just need to take a deep look at the child’s face, and they can miraculously perceive the soul’s spiritual identity.

Furthermore, according to our mystical tradition the chosen name of the child   ties into both the soul’s individual personality and its significant, irreplaceable role in the divine plan on earth. The soul is endowed with unique attributes and custom-tailored talents to assist it in successfully fulfilling its   mission on earth. In summary, the name of a child is his or her connection to their individuality and purpose in life and that is why the name giving ceremony for Jews is a very big deal. It is a celebration of the inherent individualism of the soul!

One of the recent hit movies that people have been watching during this seemingly endless pandemic, is the Disney animated film called “Soul”. In this blockbuster action packed original story, the protagonist Joe Gardner a middle school Jazz teacher dies suddenly, and inexplicably ends up in the part of heaven where new souls prepare for their journey to earth – called “The Great Before”. It is there, where we are introduced to the Disney animated version of souls in the “before” state and while they are extremely cute, they do look pretty much the same. They look like unfinished creatures that   have no unique features or personality to show for themselves.

With their original animated representation of new souls in heaven, Disney seems to imply that souls are identical up until the point of their journey to earth when they choose their personality and what they call the   “spark” for living.

Well, according to Jewish mysticism this is incorrect. It goes contrary to the Jewish idea of the soul having its name from beginning of time. In our tradition the name reflects as we said before the individual personality of the soul which is an integral part of the soul from the very beginning!

Yes, there is a sameness of spirit shared amongst souls on the purest and earliest levels, but souls were never at any point blobs of spiritual energy without personality. Every soul is made up of a character that differs it from its fellow souls.

Souls are not a bunch of Jerrys and Terrys! Every soul has a unique name that reflects its uniqueness. They have intelligence, consciousness, self-awareness, emotions, stamina and perseverance, never to be lumped into a tasteless, colorless and “no personality” grouping!
Every soul has a unique personality name that their parents instinctively tap into and perceive after birth. It is the same personality the soul always had from the start. Let us call it their “spiritual DNA”.  Only later when they land in a specific body, does the spiritual and physical DNA mesh into one unified being whose personality remains to a large extent predetermined by its soul character that predated the body!

In other words, the character of the soul is not some garment that is dressed at birth and stripped at death. Nor is it acquired through the experiences of life. It is an integral part of the soul that always existed.

True, we do have a tradition that the soul is taught by an angel the entire Torah just before it is born while it resides in the mother womb. But that is not to say that the soul did not have a personality before this moral indoctrination. It is only educated by the angel, not completed.

This also helps us understand how souls can recognize each other in the afterlife as well. Because their innate personality always stays with them, it makes them identifiable to all even without their physical body.

This is a very important takeaway for all of us about the inherent value of a human soul.  Every soul is uniquely crafted and an indispensable part of the big picture.

The Nazis wanted us to believe that we were just numbers. The Nazis tattooed those dehumanizing numbers on our ancestors’ arms in the concentration camps to underscore our sameness and duplicity. Their message was that individual souls are replaceable and unessential.

Our belief is that no one is dispensable. Everyone has their one-of-a-kind talents and a mission that is unique to their soul from the beginning of time. Every soul is needed to change the world. Only that specific soul can realize that specific potential. Every soul truly has a name!

About the Author
Rabbi Avraham E. Plotkin is an emissariy of the Lubavitcher Rebbe to Markham, Ontario, a suburb of Toronto. He is the spiritual leader of a very dynamic Synagogue and Jewish Centre there. Rabbi Plotkin is a longstanding member of the Rabbinical Council of Toronto. His classes on Kabbalah and marriage, have been received by sell-out audiences around the world.
Related Topics
Related Posts
Avraham E. Plotkin
Comments