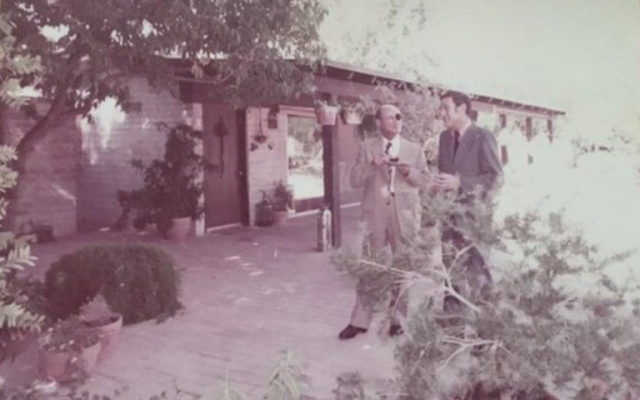 (Photo of Moshe Dayan and Al Stern. Photo is the property of Stephen Stern.)

“This is a difficult thing to say and ask. My thinking may be muddy, concussed, confused, filled with misrepresentations, so to speak,” I said to a self-proclaimed right-wing American Christian Zionist. I had no idea what she was talking about. I had no idea what she meant by calling herself a Zionist. In fact, I have no idea what many Jews mean when they identify as Zionists, or what many others, especially on the Left, mean when they claim to hate Zionists while claiming Jews are okay. Israeli Jews, for example, have a hard time separating Zionism from being Jewish. How can they? To do so requires three distinct identities that make little epistemic sense to most Israeli Jews. Being Jewish, being a Zionist and being a Jewish Israeli are the same thing for most. But it’s still not clear what many Israeli Jews mean by the word “Zionism” as evidenced in Jewish debates about Israeli democracy (who is in vs. who is out), regarding Palestinians in the West Bank and considering the 20% of the Israeli electorate who are Arab Israeli citizens. Are Arab Israeli considered Zionists, or are they just citizens of Israel?

The only thing I know is that every time the term “Zionism” is used, I’m about to hear something about Israel. I asked the Christian Zionist what her “Zionism” means. She believes all Jews should go there. I asked if she knew that white supremacists agree with her. She claimed she wasn’t aware they share this goal, nor did she explain why it’s important for all Jews to move to Israel. She wouldn’t elaborate on her adoption of the term, leading me to understand her usage of Zionism as hiding something she doesn’t want seen.

I was sitting next to a non-Jewish BDS-loving scholar of Martin Heidegger at dinner once. After my first spoonful of miso soup, she asked me if I was a Zionist. I inquired what she meant by “Zionism” and was advised that Zionism is a colonizing, racist, apartheid ideology. “There’s no denying both European and Mizrahi Jews colonized 27 percent of British occupied Palestine for Jews. European Jews used the name ‘colonizing’ in building a new Jewish homeland where Jews once had a homeland,” I said. She inquired if I thought Israel had a right to exist? I responded, “Your question presumes it already exists. Are you asking if I think Israel should be erased?” Adding, “Israel’s subjugation of Palestinians and the denial of statehood for Palestinians is criminal. If erasure is your solution, what should happen to the United States? Aren’t we far uglier?” I was told, “American hypocrisy doesn’t mean I can’t speak about Israel as a criminal existence.” Her use of the term “Zionism” hid the fact that she isn’t uncomfortable erasing a country, not a government, but an existing country.

The irony was breathtaking: a non-Jewish lover of Heidegger (a German, Jew-hating philosopher who joined the Nazi party) was unwilling to acknowledge Israel was and is a Jewish response to European Jew hatred and Middle Eastern Muslim Jew hatred, the kind exercised by her philosopher hero — who upon being made Rector of the university — fired his Jewish mentor, Edmund Husserl, and banned psychiatrist and philosopher Karl Jaspers from the campus library for being married to a Jew.

There were nine of us on the Zoom call, all of us Jewish scholars discussing rising Jew hatred. We were from the U.S., the U.K., and Israel. When I mentioned the occupation, two others asked, “What occupation?” I took a swig of single malt scotch and answered, “The occupied zone the army and state identify as areas A, B and C.” Silence. “Close to three million Palestinians live in areas A and B. Area C is 60 percent of the territory and houses nearly a half a million Jewish settlers.” I went on. “Jewish Area A and B allow for limited Palestinian governance, but answer to Israel on all Israel identifies as a security issue. How is this all but a colonial conquest?” I was then asked: “You wouldn’t support the building of a third temple?” Another gulp of shock. “Why would you provoke 300 million people who could bring more insecurity to Israel’s Jews, and for that matter, Jews around the world?” I didn’t need to ask what the eight meant by “Zionism.” It was clear the word  justifies anything the Israeli government does, including subjugating Palestinians in the West Bank on behalf of an uncompromising sacred ideology. The oddest thing: there wasn’t an observant Jew among the eight.

In the late 70s, Moshe Dayan came to our house in Arizona and spoke about a two-state solution. Dayan’s words showed a secular understanding. Compromise was integral to his solution. The sacred understanding I heard in that Zoom meeting had no room for Dayan’s secular view of Zionism.

Moshe Dayan supported a compromising secular Zionism. He had a lot to choose from. There were once many types of Zionism, stretching back to before Theodore Herzl. I may break the various types into three general camps. Anti-secular Sacred Zionism (e.g., that of Satmar Hasidim), religious/nationalist sacred Zionism and secular Zionism.

The concept of “Zionism” employed by the secular Zoom-room eight is at odds with Herzl’s Zionism and also Dayan’s, not to mention that of the Christian Dominions and the Leftist BDS advocate.

But what each of them share is that they apply the name “Zionism” to cover something ugly. The Christian Zionist is hiding the belief all Jews need to move to Israel to cause the second coming of Jesus. At said time, Jews will convert to Christianity. If not, Jews will go to hell. The BDS-loving Heideggerian’s usage of Zionism hides the calling for another destruction of Jewish lives. Not that this end game will develop on her terms, but she was okay with it; she kept deflecting my question, ”What will happen to the 9 million people who live in Israel, most of whom have lived nowhere else and have it as their only home?” The Zoom group have accepted the religious understanding of Zionism while refusing to answer what they see as their political end game; what happens to the Palestinians? Like the BDS-lover who didn’t care about the outcome-game for Jews, the Zoom crew didn’t care about the end game for Palestinians. All three hide this ugliness behind their use of the name “Zionism.”

A modest proposal: Let’s stop using the name “Zionism” altogether. Lose the term. Drop it from usage. In its place, just say what you mean by it. This switch allows for an honest discussion for a change. Perhaps the emerging clarity will better help creating a peaceful solution. Maybe it won’t. I am not sure any of the above people care about peace for those they hate. Either way, it puts an end to duplicity and forces people to own what they are saying. How else will we learn to stop erasing the face of the other with these “Zionisms”?