I pray in a synagogue in Jerusalem with solar panels on the roof. While people have prayed in buildings — and times in history — both light and dark, renewable energy can enable the flow of spiritual energy. Harnessing the sun’s light for energy today can advance our collective enlightenment. The sun’s rays are emissaries illuminating and supporting all life on the earth.

Solar energy is the “polar” opposite of energy from fossil fuels. Solar technology captures electromagnetic radiation energy from the sun. This energy travels across our solar system at the speed of light and provides what is needed for both plant and animal life on earth. The sun´s energy is fresh and renewable. It is abundant and living light. 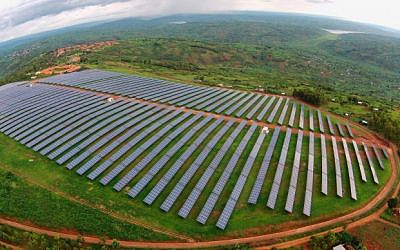 By contrast, fossil fuels are the remains of life that have died. Fossil fuel processes extract dead plant and animal matter, in the form of coal and oil that has been compressed deep in the earth for hundreds of millions of years, and combust the fuels. This above-ground combustion produces toxic pollutants that enter the atmosphere, as well as the land and water. Fossil fuels released into the atmosphere create gases that trap the sun’s light, like in a greenhouse, and cause excess global heating. Our fossil fuel energy use thus turns the sun’s life-giving light and heat into a curse.

The Hebrew language offers an insight into the nature of light and darkness, blessing and a curse. The Hebrew noun אור ohr means light and forms the root of the verb להאיר, leha’ir. This verb appears in the first chapter of Genesis multiple times, referring to God creating the luminaries to provide light to the earth. There is a verb with similar letters, לאור, la’or, which means to curse. The use of this verb appears in the request of Balak, the king of Moab,  to the prophet Balaam to curse the Jewish people (Numbers 23:7).

While la’or, to curse, contains a different Hebrew root (ארר aleph reish reish) than leha’ir, to illuminate,  the uses of both verbs in the Bible involve the letters that spell light. Why does the Hebrew word for curse hint at light?  Perhaps la’or relates to having too much light, like putting fossil fuels that were stored over hundreds of millions of years into the atmosphere in the course of 200 years. Or to spending too many hours a day looking at one’s illuminated screen—which is shown to cause sleep disturbances. Another critical connection is having too much artificial night light from a city, which disrupts the safe starlight and moonlight migration of all kinds of species, such as endangered sea turtles born on the beaches of Israel and many other countries.

Amazingly, the Hebrew root ארר aleph reish reish (in the word for curse) has a second meaning—to dig, make holes, or break through. Extracting coal, oil, and gas, including through fracking, is a deep dark dig that is damaging our common home and our lives. The ancient Hebrew language conveys deep messages, and one of them may be that to dig deep in the earth can ultimately result in a curse, one that we can prevent by limiting our extraction from the earth.

One of the most influential rabbis of modern times, the Lubavicher Rebbe, spoke in 1981 about the importance of using solar energy. The Rebbe, Rabbi Menachem Mendel Schneerson, studied mechanics and electrical engineering in Paris, and volunteered during World War II at the Brooklyn Naval Yard, helping to design the USS Missouri. Spiritually connected and with an appreciation for science, he stressed how God has given us this bountiful energy source in the form of the sun which is giving life to the earth, and that it would be ‘plainly ungrateful’ of us not to make use of it. He said 40 years ago, “In a relatively short time, [solar energy] could free the entire country from its subjugation to those small countries that have oil in their land… Very soon, the entire country should switch, first of all, to energy that can be generated from the sun’s rays in the south, which should be supplied to the entire country.” 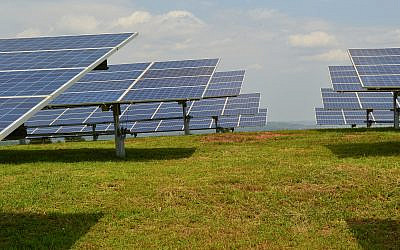 While the use of solar and wind energy has increased significantly in recent years, the fraction that they contribute to meeting accelerating, global energy demands continues to remain low—at only about 9%. Why is this? A verse in the Book of Genesis (14:10) can shed light on this question: “Now the Valley of Siddim was dotted with bitumen pits; and the kings of Sodom and Gomorrah, in their flight, threw themselves into them, while the rest escaped to the hill country.”

Rabbi Leo Dee and I explore the ecological implications of this verse in Eco Bible volume 1: An Ecological Commentary on Genesis of Exodus. The kings of Sodom and Gomorrah fell into pits of “black gold” or bitumen, also known as asphalt (in Hebrew, chemar). In ancient times as today, surface seepages of this thick, sticky form of crude oil occurred and still occur in a limited number of places in the world, including Azerbaijan, Iran, Pennsylvania, Alberta, and the Dead Sea. People used and still use the natural tar for its waterproofing qualities and for roads.

Why does the Torah mention this geological detail in relation to the leaders of these ultimately decimated societies? The Book of Genesis continues, “The invaders [four Middle Eastern kings] seized all the wealth of Sodom and Gomorrah and all their provisions, and went their way” (Genesis 14:11). Once the kings of Sodom and Gomorrah fell into the bitumen pits, they got trapped and lost all of their wickedly gained wealth.

The story of the kings stuck in bitumen relates deeply to our world today. Canada is the planet’s fourth-largest oil producer, and 60 percent of its oil comes from the bitumen of oil sands. The Canadian province of Alberta has most of the world’s reserves of natural bitumen in the Athabasca oil sands, an area larger than England. Bitumen is considered the dirtiest and most polluting fossil fuel , due to the energy required to separate the crude oil from the sand and the carcinogenic chemicals used to thin it for pipeline transport. In July 2010, the largest oil pipeline spill in US history occurred, spilling over a million gallons of Canadian diluted bitumen (dilbit) into Michigan’s Kalamazoo River. As Inside Climate News reported, “The spill triggered the most expensive [on-land] clean-up in US history – more than ¾ of a billion dollars – and it lingered on for years.”

Today, we and our leaders are trapped in fossil fuel use by economic inertia and political resistance. Oil remains our fuel of choice to make gasoline for cars and trucks, jet fuel for airplanes, tar and asphalt for paving roads, and even plastics which are filling our oceans with toxic trash that never fully breaks down.

The rabbis of the Midrash (around 5th century C.E.) teach that Abraham, the prophet of light, pulled the kings out of the bitumen pits. Abraham provides an example of lifting people from being trapped in fossil fuels. And scientists published a 2017 study and environmental roadmap on how most countries in the world could transition from fossil fuels to 100 percent wind, water, and solar energy by 2050. We do not need to wait until someone rescues us—or until we run out of all fossil fuels—but can take steps now as individuals, communities, and nations to free ourselves from devastating fossil fuel use.

One positive example is The Faith Inspired Renewable Energy Project in Africa, which brings together The Interfaith Center for Sustainable Development, Green Anglicans of The Anglican Church of Southern Africa, and the social business Gigawatt Global for deployment of renewable energy on lands owned by faith institutions. The project brings electricity to Africans, reduces indoor air pollution and deforestation, and helps mitigate climate change. Let us illuminate our awareness to shift the balance towards a thriving, sustainable, and spiritually aware humanity and planet.