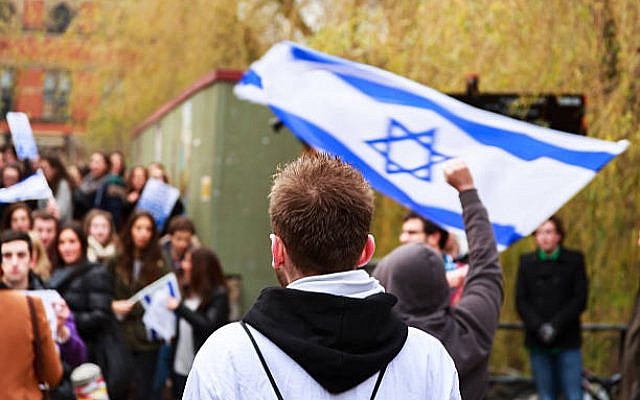 The threats that Israel faces daily have grown in 2021. Terrorist groups like Hamas continue to fire rockets into Israel, targeting innocent Arab and Jewish Israelis. The Taliban – who aim to radicalize the Middle East region in their own image – has taken over Afghanistan and is openly hostile to Israel. An increasingly aggressive Iran remains hellbent on acquiring nuclear weapons and sowing chaos through proxies like Hezbollah as it seeks to build a power base on Israel’s border and the Mediterranean Sea. Israel is the stabilizing force in the Middle East and the only country able to counterbalance and respond to Iran and its terror proxies. It is also the only Jewish state in the world, the only homeland for the Jewish people. It is more critical than ever not only to support, but also to further advance, the strategic alliance with our greatest ally in the Middle East.

At the most basic level, being “pro-Israel” means we believe that Israel should exist as a state that serves as the national homeland for the Jewish people. If Israel should exist, then it must have borders and, like every other state, have the right to defend its people against attacks, whether by state or non-state actors. That’s why being pro-Israel means supporting Israel’s ability to defend itself against the full range of threats it faces, including rockets and missiles in Gaza and Lebanon fired by terror groups, terror attacks emanating from within its borders, the threat of nuclear weapons and long-range missiles from Iran, and the ongoing threat of terror attacks within Israel. This is even truer when those attacking Israel are driven by ideologies that deny Israel’s fundamental right to exist as a homeland for the Jewish people and seeks its destruction.

U.S. financial and diplomatic assistance to Israel is a critical component to keeping Israel safe against these constant threats by providing it the means to defend itself, by itself. This means supporting security aid to Israel to fund critical security systems like Iron Dome without unnecessary political conditions that would only serve to undermine Israel’s ability to defend its people. Doing so not only helps Israel protect itself, but it serves America’s national security interests in numerous ways – a topic for another day.

As we all know, the Iron Dome is a lifesaving and purely defensive missile system, designed to protect all innocent civilians, regardless of faith or ethnicity. The Iron Dome stopped many of May’s rocket attacks from Hamas and prevented countless deaths and injuries by destroying rockets targeting civilians and giving Israel the ability to absorb the rockets before being compelled to respond with military force to stop them. Hamas’s cynical strategy was to launch attacks from its own civilian centers and try to overwhelm Iron Dome and other defenses, forcing Israel to respond militarily and then condemn Israel for doing so.  It’s simple: Iron Dome saved, and continues to save, thousands of both Israeli and Palestinian lives.

To be pro-Israel, we must also condemn the dangerous “stunt attack” on Iron Dome funding in September led by a small group of anti-Israel House members who ultimately voted against providing Israel with $1 billion in supplementary funding to replenish Iron Dome missile defense system agreed to by the Biden Administration. Senator Rand Paul (R-KY), who continues to unilaterally block a consensus funding bill from moving forward, literally stands in the way of providing Israel with lifesaving defenses.

It is increasingly clear that anyone who supports peace could not, in good conscience, vote against lifesaving Iron Dome funding. Without replenishing the defensive Iron Dome, countless civilian lives are at risk, and terrorist organizations including Hamas are emboldened to indiscriminately attack civilian targets.

Pro-Israel supporters must also denounce ongoing efforts by those like Senator Elizabeth Warren and Bernie Sanders or Rep. Betty McCollum, Chair of the House Appropriations Defense Subcommittee, that directly aimed to add unnecessary restrictions or conditions on U.S. aid to Israel. Or the efforts by Rep. Alexandria Ocasio-Cortez to block selling Israel precision weaponry that can minimize civilian casualties when necessary to respond to Hamas or other attacks. America’s security relationship with Israel goes back decades, has allowed Israel to defend itself against an array of threats, promoted stability in the region and leaves open the possibility of peace.

But don’t tell that to self-proclaimed “pro-Israel” and “pro-peace” J Street. The organization – which has previously endorsed and celebrated proposals to restrict or condition U.S. security assistance to Israel, such as Rep. McCollum’s bill earlier this year – not only failed to condemn Congresswoman Marie Newman as one of only 9 members to vote against Iron Dome funding, but decided to raise money for the anti-Israel congresswoman’s re-election bid in 2022 a week after her appalling vote.  A number of others who voted no or abstained somehow still have J Street’s endorsement, including Reps. Andre Carson, Raul Grijalva, Chuy Garcia, and Hank Johnson.

One thing is certain: voting against funding the Iron Dome defense system for Israel is neither pro-Israel nor pro-peace.

And just a few weeks ago, J Street kicked its engines into even higher gear as it worked with Rep. Andy Levin to introduce the dangerously misguided “Two-State Solution” bill in the House. Let’s be clear – this bill has nothing to do with actually achieving a two-state solution.

First, the bill makes no mention of the fact that Palestinian leaders continue to refuse to acknowledge Israel’s right to exist as an independent Jewish state. How can we reach a two-state solution if one of the parties continues to reject the entire premise? Instead, the bill rejects reality and unfairly places the full blame of any previous failures to achieve a two-state solution squarely on Israel – a preposterous position given that Israel has negotiated in good faith with Palestinians many times in the past, only to have Palestinian leaders reject every single proposal since before the establishment of the state of Israel.

It gets worse, though. The bill also incorporates continued calls for restrictions on critical U.S. security aid for Israel, which would undermine Israel’s ability to protect its citizens from terrorist attacks and send a signal that the United States no longer has Israel’s back. That would play right into the hands of the most irredentist actors in the region. At the same time, the bill is completely silent about the Palestinian Authority’s financial support for terrorists, not to mention Hamas, which targets innocent Jewish and Arab Israelis alike with constant rocket fire.

Trying to proscribe a solution that neither Israelis nor Palestinians support does not move us closer to peace.  To truly achieve peace, we must lead and support bilateral negotiations between the two parties. In the end, peace will only come when both parties want it.

To be pro-Israel and pro-peace in 2021, we must support an Israel that is able to defend itself, because we know that a strong Israel means a safer, more secure, and more prosperous world for all.  Efforts to condition or restrict security aid to Israel, promote a one-sided, “Two-State Solution” bill in the House, or actively fundraise for some of the most anti-Israel voices in Congress besmirches our ally, Israel, weakens global security, and emboldens terrorists. There is nothing “pro-Israel” or “pro-peace” about that.