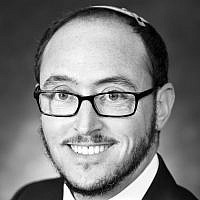 The Blogs
Jacob M. Lieberman
Apply for a Blog
Please note that the posts on The Blogs are contributed by third parties. The opinions, facts and any media content in them are presented solely by the authors, and neither The Times of Israel nor its partners assume any responsibility for them. Please contact us in case of abuse. In case of abuse,
Report this post.

On November 20, 1977, Egyptian President Anwar Sadat became the first leader of an Arab country to visit the State of Israel.

His visit was, for so many reasons, unlikely. Since Israel was founded in 1948, Arab countries had made it a policy not to deal publicly with the state, and no Arab leader had visited Israel in any official capacity before Sadat did. Additionally, by 1977, Israel and Egypt had fought four wars, including the 1967 war, when Israel captured the Sinai Peninsula.

But on November 9, 1977, in a speech to the Egyptian parliament, Sadat offered to visit Israel. Shortly thereafter, Israeli Prime Minister Menachem Begin issued an official invitation to him. Very few people then would have said that Sadat’s offer to visit was sincere, and very few people would have predicted that he would accept Begin’s invitation.

On this side of history, however, we know that he did.

When Sadat arrived at Ben Gurion airport, Begin and Israeli President Ephraim Katzir greeted him with a 21-gun salute. After an hour-long private meeting with Begin, Sadat addressed the Knesset in Jerusalem. In his speech, in Arabic, Sadat acknowledged the incredulity and opposition surrounding his visit. He acknowledged that his visit came in spite of “the feeling of utter suspicion and absolute lack of confidence.” He accepted, he said, responsibility to “exhaust all and every means” to prevent “the horrors of new, shocking and destructive wars.” Famously, he “really and truly welcome[d Israel] to live among us in peace and security.”

There is much more to say about Sadat’s speech and Begin’s response. For brevity, I will flash forward in time to state the obvious. Sadat’s visit was a huge step, perhaps the most difficult, toward the Camp David agreement, a peace agreement that the global community celebrated in 1978, when Begin and Sadat jointly were awarded the Nobel Peace Prize for their efforts. There is much more to say about what has or has not happened since the Camp David agreement. I’d venture to say it’s a good deal less encouraging if I flash forward from there.

Twenty-nine years into the Arab-Israeli conflict, as it sometimes was called, it was not easy for Sadat to brave the feelings of “utter suspicion and absolute lack of confidence” and move forward courageously toward a “permanent peace based on justice.” Today, 38 years after he made that move, it isn’t any easier. As I think about that unlikely visit, and the two leaders’ audacious courage in pursuing peace through it, I am inspired to imagine that today too, someone, equally unexpected, may yet emerge vigorously pursuing peace.

I’m praying for it.

Until then, I will ask the question that comes to me nearly daily in these difficult days of stabbings in Israel and attacks in Paris: What have I done today to promote peace and discourage violence? And can I do more?

About the Author
Rabbi Jacob M. Lieberman is a Reconstructionist rabbi, meaning maker, and social change agent. He believes that inspired [+ Jewish] living starts today with wonder, gratitude and curiosity. Jacob mixes wit, openness, vision, community building and social justice with spiritual growth then follows it up with hard work, one day at a time. Jacob is a graduate of the Reconstructionist Rabbinical College and a biological and adoptive parent to two beautiful Ethiopian Jewish kids.
Comments