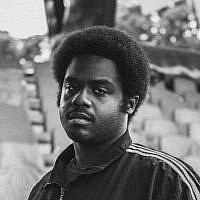 The Blogs
Daniel Mkpanam
Apply for a Blog
Advertisement
Please note that the posts on The Blogs are contributed by third parties. The opinions, facts and any media content in them are presented solely by the authors, and neither The Times of Israel nor its partners assume any responsibility for them. Please contact us in case of abuse. In case of abuse,
Report this post.

Now that German apparel giant Adidas has officially cut ties with Kanye West, after what seems like an eternity of the rapper’s recent antisemitic tirades – in which he accused Jews of not only your typical millennia old libelous claims like controlling the media and business, equating abortions and Planned Parenthood to the Holocaust but also (checks notes) spurring his ex-wife Kim Kardashian to have sex by the fireplace with Pete Davidson to giving the Jewish people death threats,  it’s important to see how and where this all started.

A lot of you can probably remember when Mr. West said the indefensible four years ago, “When you hear about slavery for 400 years … For 400 years? That sounds like a choice.” A lot of people point to this moment as the day Kanye finally “cracked”, but as far as ignorant remarks go, we can go back a little further.

In 2013 Kanye made statements about Black people not having the same “connections” as Jewish people on an interview with New York City’s Hip Hop and R&B radio station Power 105.1 FM. Nation Of Islam minister Louis Farrakhan came to Ye’s defense, stating that the rapper “told the truth”  and it was reported that not too long after that, at a concert Kanye said “I talked to Farrakhan the other night, he told me not to apologize. I ain’t finna apologize.”

Farrakhan and West seem to have a warm relationship, with Kanye having attending his events and even mentioning the minister in his songs and on another hand Farrakhan defending West’s 2018 comments about slavery in addition to his 2013 remarks.

All that has lead up to this October where we’ve been bombarded with one jaw dropping racist remark after another (did I even mention the Whites Lives Matter shirts that kicked off this mayhem in the first place?) from the Chicago rapper.

What happens when antisemitism goes unchecked and is even normalized by society? You get a rapper spewing so much racist bile I’m literally losing track of what he’s said. And now we’ve got white supremacists marching to Los Angeles of all places, whipping out Nazi salutes and placing a banner over a freeway saying “Kanye is right about the Jews”.

As shocking as all of this is…things getting this bad were foreseeable, actually. Kanye didn’t wake up one day and randomly decide to dish out death threats to Jews, noticeable remarks and traits led up to this. Someone who has been shown to hang out with antisemitic people (some of whom are fellow rappers), racist politicians, engage in believing baseless conspiracies and not suffer tangible consequences from spewing racist remarks becomes a full fledged antisemite, it’s as surprising as a can of soda exploding in your freezer after you’ve left it there for too long. Kanye went this far because he’s done so much racist stuff over the years he probably took it as a given he won’t have paid any price for his latest antisemitic marathons. Don’t just take my word for it, Ye said it himself! “I can say anti-Semitic things, and Adidas can’t drop me. Now what?” sounds like the words of a guy who’s been very very comfortable being a racist out in the open for quite some time now.

I take this as a reminder we should all call out antisemitism, like all other forms of racism, no matter what form it takes and give hate no harbor.

About the Author
Born in Lagos, Nigeria, Daniel attends the Kwame Nkrumah University of Science and Technology in Ghana. His interests are in social justice, politics, international relations/diplomacy, soccer and comic books.
Related Topics
Related Posts