The Blogs
David Breakstone
Deputy Chairman of the Jewish Agency executive
Apply for a Blog
Please note that the posts on The Blogs are contributed by third parties. The opinions, facts and any media content in them are presented solely by the authors, and neither The Times of Israel nor its partners assume any responsibility for them. Please contact us in case of abuse. In case of abuse,
Report this post. 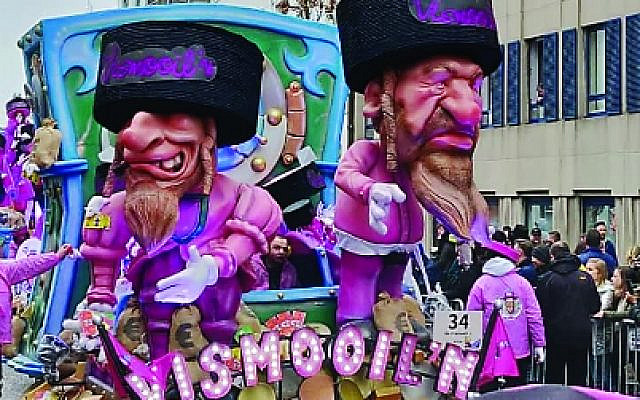 A float of Jewish puppets surrounded by cash in the Aalst carnival parade, Belgium (Courtesy of FJO)
Purim, Corona and the secret Jewish cabal running the world

One in five Europeans seems to know about the secret Jewish cabal running the world. What I want to know is how they found out. If it was you, or someone you know who spilled the beans, please come forward. The least you can do is help us assess just how damaging a security breach there’s been.

What I’m referring to, for those who haven’t yet heard, are the findings of a survey recently released by the European Jewish Association revealing that 20% of the 16,000 people interviewed in 16 countries on the continent believe a secret network of Jews dominate international political and economic affairs. The data was publicized at a Paris conference on anti-Semitism as evidence of an alarming escalation of the phenomenon. Which I also find confounding. I mean, why should people recognizing that it’s we Jews who are pulling the strings be equated with hating us? Go figure.

In any case, now that the cat’s been let out of the bag, I don’t see any reason not to reveal the full breadth of that secret cabal’s manipulative machinations. A few examples should prove sufficiently instructive.

Revelation #1: The Corona conspiracy
Israeli scientists claim that they will have a vaccine against the Coronavirus ready within three weeks. Three weeks? No easy feat. Unless, of course, they’d already had it ready months ago. A sneaky people we are, having unleashed this pandemic on the world – a theory actually being promulgated on anti-Semitic web sites – only so as to be able to turn around and say it was we who saved it. Of course, having already been credited with responsibility for the Black Plague, we’ve amassed centuries of experience in these things. Still, yet another impressive triumph in our successful campaign celebrating Israel’s incomparable contribution to making the world a better place for all.

Revelation #2: White House down
The process of infiltrating the White House began in earnest more than two decades ago, when our agents arranged for a “chance encounter” between Chelsea Clinton and Marc Mezvinsky at a political retreat back in 1997. She was only 17 at the time and he 20. Marc, of course, was raised attending a Conservative synagogue. Astonishing, perhaps, to the uninitiated, but even way back then we realized how influential a Jewish son-in-law in the White House could be and we were betting on Hilary.

Infinitely calculating, however, when the first whiff of a Trump presidency was airborne a few years later, we immediately arranged for Ivanka and Jared to meet through “mutual friends.” You can already fancy who they were. Truth be told, it was even harder for us to keep their courtship going than it was Chelsea’s and Mark’s. Ultimately it required us cajoling Ivanka into converting, but if that was what it was going to take to get them under the chuppa, that was what we were going to do.

Bottom line? The move of the American embassy to Jerusalem? The “deal of the century” to resolve the Middle East conflict? Those developments may have surprised you, but we… Well, let your imagination run wild. Even to the point of wondering if we weren’t aware all along that the first tangible impact of these moves would be to drive droves of Israel’s Arabs to the polls, three elections in a row.

Revelation #3: The Democratic debacle
It was no easy task convincing 20 presidential hopefuls who had no chance of winning the nomination to fight it out in the Democratic primaries. What we orchestrated even sounds like the beginning of a joke: a disgruntled old Jew, a fresh-faced gay man and a contentious woman get up on the stage… It was even more complicated to subvert their campaigns. But we’re convinced our ploy is working. Bernie’s refusal to address AIPAC and his threats to move the embassy back to Tel Aviv? Bloomberg’s late entry and early departure? Extinguishing Pete’s rising star? Getting Amy to back Biden? All examples of the cabal operating at its best. Our end game? Hang around and see. The pundits can pundit from now until Election Day, but the results are already in the bag. In the meantime, don’t be surprised when the Buttigieg’s show up in Tel Aviv, the ultimate LGBTQ travel destination, for a bit of R&R bankrolled by you-know-who.

Revelation #4: Russian roulette
It’s no secret, of course, that it was the cabal that brought down the iron curtain. But until now, only a few are aware that the number of Jews migrating from the FSU to Israel, Germany, the United States and elsewhere was carefully calculated to ensure optimum positioning of our proxies. Accusations of Russian meddling in American politics? The Trump impeachment over what “appeared” to be a sloppy Ukrainian investigation? Avigdor Lieberman having forced three Israeli elections in less than a year? Amazing what a few well-placed agents can do.

But as much as I’d like to go on boasting of our penetration of the world’s most elite decision-making bodies, I would be remiss in not noting that there’s a most serious side to all of this. In the last few weeks alone, there have been headlines screaming of a dramatic rise in physical assaults against Jews in the United States, a 27% upsurge in anti-Semitic acts in France, a frightening increase in hate crimes against Jews emanating from both the radical right and the radical left, and – 75 years after Auschwitz – a 32% jump in anti-Semitic crimes in Germany. Even Al Jazeera reported last month that anti-Semitic incidents have reached a fresh record in the United Kingdom.

This alarming trend is one that we’re going to have to continue tackling once recovered from the merriment of Purim – itself the quintessential episode of large scale anti-Semitism. The Jewish Agency, acting on behalf of the global Jewish community, has recently highlighted the struggle against the phenomenon as one of its top priorities and anticipates energetically partnering with the many others engaged in this imperative effort in pursuit of a safer and saner world for all. I have every confidence the secret Jewish cabal in charge of everything will join in.

About the Author
Dr. David Breakstone is deputy chairman of the executive of The Jewish Agency for Israel and the conceptual architect and founding director of the Herzl Museum and Educational Center in Jerusalem. He also serves as a member of the executives of the World Zionist Organization, Keren Kayemeth LeIsrael (JNF) and Keren Hayesod. The opinions expressed herein are entirely his own.
Related Topics
Related Posts
Comments