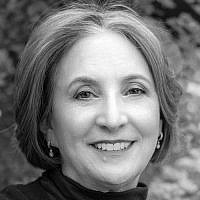 The Blogs
Bernice Lerner
Author and speaker, former dean of adult learning
Apply for a Blog
Advertisement
Please note that the posts on The Blogs are contributed by third parties. The opinions, facts and any media content in them are presented solely by the authors, and neither The Times of Israel nor its partners assume any responsibility for them. Please contact us in case of abuse. In case of abuse,
Report this post. 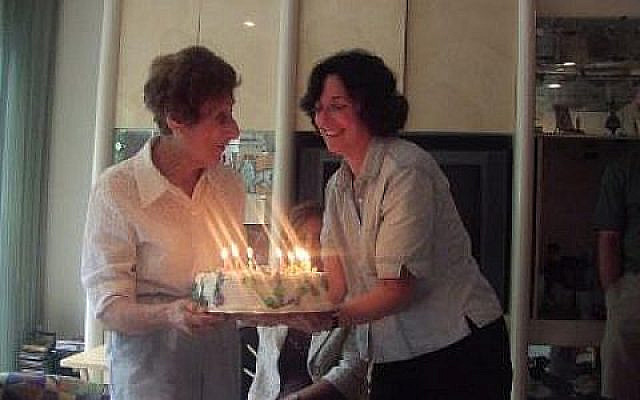 Bernice with her Aunt Helen, the go-to person for questions about family history. (courtesy)

One week before she was born my mother-in-law’s father died. Within five years her mother remarried, and it was not until my mother-in-law was a young teenager that she learned the truth—that the man with whom they were living was not her biological father. Decades later, she learned that her biological father had died of tuberculosis. There was so much more she would have liked to learn about him and the circumstances of those times, but the aunts and uncles who had been so kind to her, who would have been founts of information, had passed away.

For her 65th birthday a friend of mine asked her siblings and their children to gift her their life stories. She would collect and cherish their writings. What she could not hope for was her parents’ stories. They had died young—before bequeathing information about where they had been born, what joys and tribulations they knew as children, what life was like in Morocco before they decided to move to Israel in 1956. There was no living person who could share a telling anecdote, paint a picture, explain her parents’ challenges.

How many of us one day wake up to realize that there are gaps in our knowledge of our family history, details we wish we knew? Perhaps unidentified people in old photographs call to us: Please do not relegate our existence to history’s dust bin. Perhaps dates on a document or words in a letter beget questions.

In all fairness, there are reasons that we may not have wanted to query relatives who may have had stories of interest to impart. Perhaps their past held chapters they would just as soon forget. We might have had to delicately steer a conversation or wait for the right mood and moment in order for information to be forthcoming. The sensitive inquirer does not want to evoke painful memories; the thoughtful recounter does not want to induce stress in the inquirer. Either party can shut things down pretty quickly.

And some questions may not become important to us until we reach a certain stage in our development. Or we simply thought there would always be time to find out, until there wasn’t.

Given our respective dispositions, I had an easy give and take with many of my relatives. And yet, there are so many questions I wish I had asked them before time ran out.

In 2011 my father died at age 89 of Alzheimer’s Disease. Before the illness took its final, darkest turn, there were many opportunities for me to plumb his memory. For years after he retired, we had daily phone conversations. (I called every day at 5:00 p.m. to occupy him while he anxiously waited for my mother to return from her job at Bloomingdale’s.) I now wonder about his wartime experiences. The subject was delicate, but he was always happy to talk.

In the fall of 1944, my father, emaciated and benumbed, escaped from his Hungarian forced labor battalion. The war would not end for another seven months. How did he manage to evade capture by the Hungarians, the Germans, and the Russians? He could have been shot on the spot, or sent to a concentration camp or POW camp. Where, during those precarious months, did he go? Where did he sleep? What did he eat? Who helped him and in what ways?

I wish that I had asked my Aunt Elisabeth (before she died of cancer in 1983) about her Aunt Malcsi, whom Elisabeth had traveled 250 miles (from Sighet to Brasov, Romania’s second largest city) to visit when she was only 12 years old. What had been her impressions of this cosmopolitan aunt and her family? In 1941 Malsci, Mano, and their two children—Heimi and Bebe—were murdered in the first large-scale massacre of the Holocaust, in Ukraine. Apart from my mother, who shared with me her nominal recollections, the only other surviving person who could have remembered them—and other of my murdered family members,  including my grandparents and my aunts and uncle—was Elisabeth.

When my Uncle Jack was in his eighties and homebound, with both of his legs amputated on account of diabetes, he occasionally railed against the “dumb” officers who tormented him during his years in Hungarian forced labor. Why did I not visit him more often? What more might he have shared regarding the period of his enslavement? I am curious to know how he saved my Uncle Irving (his younger brother) from a work detail in which all the men were killed, how they wound up in Vienna, and about the moment of their liberation.

In his later years, my father would say, “You can’t turn back the clock.” From the perch of old age, even times of suffering and decades of hard work seem to have passed quickly.

If I could turn back the clock I would ask my living conduits to the past more, about the people who influenced them or helped them or stood in their way— about the circumstances they navigated. I know I am not alone in wishing that I could have those conversations.

About the Author
Bernice Lerner, former dean of adult learning at Hebrew College and a senior scholar at the Center for Character and Social Responsibility at Boston University, is the author of All the Horrors of War: A Jewish Girl, a British Doctor, and the Liberation of Bergen-Belsen (Johns Hopkins University Press, 2020). She holds a doctorate from Boston University's School of Education and a master's from the Jewish Theological Seminary.
Related Topics
Related Posts
Comments