For those of you who don’t know about Nas Daily, it is my great pleasure to introduce you. Nas is Nuseir Yassin, whose daily, one-minute videos about a huge range of topics have become a viral sensation. You can see them here, or follow him on his Facebook page, which I highly recommend. Once you watch one of his videos, yours will become one of over 20 million views, and you will, almost certainly, want to see more.

Nas is an Israeli Arab, or a Palestinian Israeli (I don’t know which appellation he prefers), a Harvard graduate. He decided to leave a $120,000-a-year job in New York to start making his viral videos, which started as travelogues of sorts and then branched out into myriad topics. He is clearly extremely smart, personable and wondrously creative. To date he has made 478 videos, day after day, and is not planning to stop anytime soon.

I am proud of Nas. His success fills me with the same kind of nationalistic pride that I feel when an Israeli makes a breakthrough in medicine, or is awarded a Nobel or Mann Booker Prize (I know that there is a difference between making videos and winning the Nobel Prize, but that difference is not relevant to what I’m trying to say).

Aside from making videos, Nas, a pluralistic, peace-promoting, energetic and idealistic young man, holds meetups in various locations throughout Israel, inviting “Jews, Arabs, non-Jews and non-Arabs” to come speak their minds and make a video together. This past Friday, he had a meetup at Jerusalem’s First Station. It was timed to begin after the end of Muslim prayers, and to end before the Jewish Sabbath. He is altruistic but also realistic. In an interview with the Jerusalem Post, leading up to the event, he assured that the current situation on the Temple Mount would not be ignored: “God forbid people die on Friday – which is likely – I don’t want us to be like two kilometers next to them singing peace and kumbaya.” Similarly, later in the meetup, when someone suggested that everyone hug in the video, he responded, “No, no hugs.” 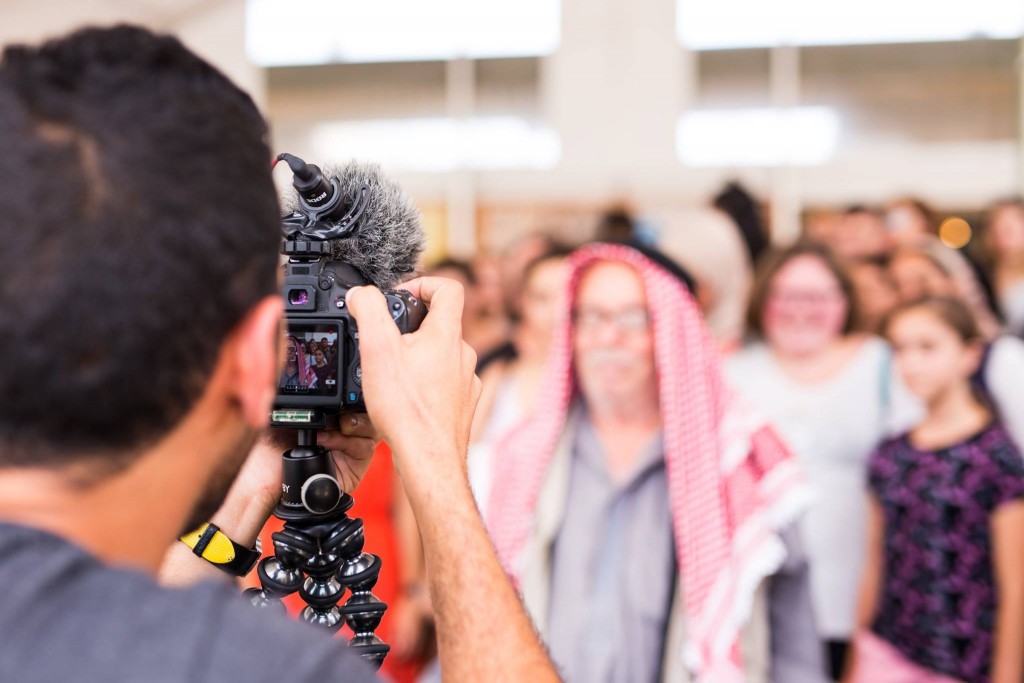 I arrived late, and don’t know what I missed in his opening speech and those of the speakers who spoke before I got there.

The first speaker I heard was an 18-year-old Palestinian woman from Jerusalem, who, until recently, had never spoken to a Jew in her entire life. She had never even dreamed of it because, in her family, Jews were considered to be like animals. She recently got a job at a hotel in West Jerusalem where, lo and behold, she discovered that it might be ok, and even interesting or fun, to speak with a Jew. Her friend, also from Jerusalem, confirmed that she, too, had never in her life spoken to a Jew, until she went to study at the Rubin Academy of Music and Dance, on the grounds of the Hebrew University of Jerusalem, where she discovered that Jews were people too. Both the girls stated that they were not at Nas’ state of acceptance and pluralism, but they were closer than they had been in the past.

Next, two young women holding a life-sized stuffed teddy bear ascended the stage. One was wearing a necklace with a dainty golden cross. She was a Palestinian Christian, from Bethlehem, and she had never experienced the feeling of separation from Jews, she had always known Jews and spoken with them. Likewise her friend, who studied at the Bezalel Academy of Art along with Jewish Israelis. But what about the teddy bear? Well, the bear, dressed in shorts and a red t-shirt with a white hashtag in English and Arabic, had changed planes three times and crossed the Allenby Bridge in order to get to Israel. Palestinians would not have been able to do that, and his campaign is intended to raise awareness of Palestinians’ limited freedom of movement, hindered as it is by Israeli roadblocks.

The meetup ended with everyone posing for a video, with the message “Most people in Jerusalem want peace [look at us all together here], it’s just the most vocal ones who don’t.” You can see it here under Day 476.

While I sat listening to the speakers, there was a running, somewhat defensive, dialogue going on in my mind, that became more clearly formulated the next day, lying in my hammock on a Shabbat afternoon. Since I didn’t take the mic in real time, which I both do and don’t regret, I want to share it now.

To the young lady working at the hotel: I am thrilled that you have begun to speak with Jews and are overcoming the attitudes with which you grew up, and I hope that, one day, you, and all of us, will be completely accepting of one another. I am, however, immensely distressed that you were educated to believe that Jews are like animals, and I wonder what proportion of the Palestinian population you represent. I imagine that there are also Israelis with such attitudes about Palestinians, and that would be equally distressing, but, thank God, I don’t know any of them.

To the women with the bear: There is a long list of countries that refuse entry to Israeli citizens. I don’t know the absolute numbers, and I’m willing to be proven wrong, but I would hazard a guess that this list is longer than the list of roadblocks within Palestine and between Palestine and Israel.

Having a non-Israeli passport, and being an incorrigible traveler, I have visited countries on all three lists, spending months on end afraid to tell anyone that I was Jewish, let alone Israeli.

Additionally, there are hundreds of thousands of Syrian refugees fighting for survival, and being refused entry to many countries, despite the fact that their very lives are at stake. (Grant me one of those moments of nationalistic pride as I point out that Israel is treating scores of these refugees in its hospitals, and literally tons of winter clothing, blankets, sanitary napkins, soap, diapers and the like have been collected from Israelis to be given to Syrians).

Likewise, there are asylum seekers from Sudan and Eritrea who are refused entry to many countries in the world (Israel has accepted many African asylum seekers, albeit housing them in appalling conditions, but at least they are not being shot or having their organs harvested, as has happened in other countries through which they pass on their way to their dream of freedom). I had a dear friend from Sudan who died trying to smuggle himself into Europe illegally, in the quest for a secure and better life. After years of unsuccessful applications for refugee status, he had exhausted all possibilities of being legally accepted as a refugee elsewhere in the world. And, very unfortunately, the list goes on. And on.

And so, sweet teddy bear with the hashtag t-shirt, I very much hope that you are advocating for freedom of movement for ALL people in the world, for repression is everywhere and the world is not a fair place.

Furthermore, there is a reason that there are roadblocks in Palestine, and it is to stop terrorists from committing attacks against Israelis. Many of us can remember the twenty years following 1967, when both Palestinians and Jews moved more freely, and Israelis would go to shop and eat hummus in Hevron and Ramallah. This all ended with the intifada. You are too young to have experienced that reality, having had the very bad fortune to live with roadblocks and Israeli military presence for your entire lives. But it was different, once. I believe everyone at the meetup would be thrilled with a reality in which roadblocks were not necessary, and I pray that it arrive quickly. But, in the meantime, to have your teddy bear protest the roadblocks without giving any background as to why they are there is not cool. We can prove anything we want by taking things out of their context, by telling partial truths or relating incomplete histories. 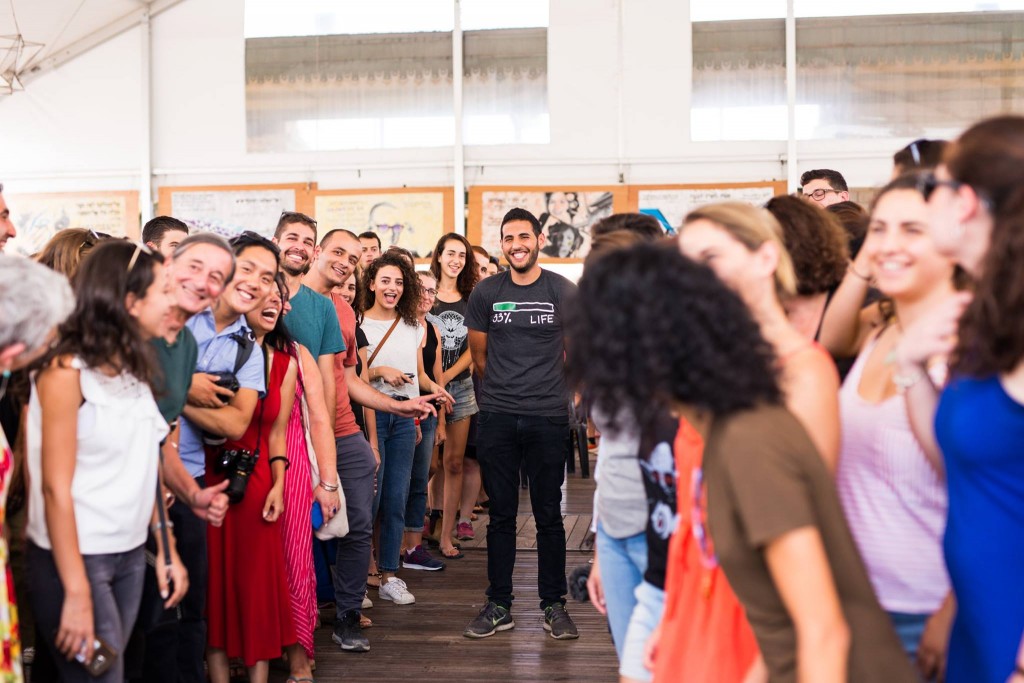 Nas studied at Harvard, and his sister has just been accepted to Stanford (I know this because he made a video about it). Their considerable accomplishments stand in living opposition to those who would claim that Israeli Arabs/Palestinian Israelis have no opportunities in life.

During the 15 minutes that I listened to speakers, I heard two Palestinians (from Palestine, not from Israel) who study in leading Israeli arts schools on the campuses of one of Israel’s primary universities, and one who works in an Israeli hotel. It seems that the apartheid of which Israel is so frequently accused does not extend to institutes of higher education nor to Israeli places of employment. People living in Israel know this. I’m writing it for the sake of those overseas.

And then we come to the message of the video that Nas made that day: “The majority in Jerusalem want peace. It’s only a vocal minority who don’t.”  But is this true? It’s so hard to know, given the extremely slanted media on all sides. On our news, we see Palestinians distributing candies and celebrating on the streets each time Israelis are killed in a terror attack. And we also read of the uprooting of Palestinians’ olive trees and the growing and frightening Israeli extreme right. What proportion of our populations do the people at the meetup really represent?

Many of Nas’ videos promote peace and coexistence, featuring unexpected and inspiring everyday examples of where this is a reality and how it can be advanced. The meetup was a lovely afternoon of bringing together many different types of people who don’t usually meet, the start of the breaking of stereotypes, the beginning grass-roots steps on a long path. While social media is notoriously used as a means of incitement and spreading hatred, here we have a fantastic example of it being used by a modern day, digital Rodef Shalom. Creating a better reality, one video at a time. May this move quickly from the micro to the macrocosm.  Thanks Nas.

About the Author
Ruthi Soudack, originally from Vancouver, arrived in Jerusalem for a short visit three days after the beginning of the first intifada, and has been here ever since. She is a traveller, yoga teacher, writer, translator, editor, storyteller, musician, and occasionally, a stand-up comic.
Comments