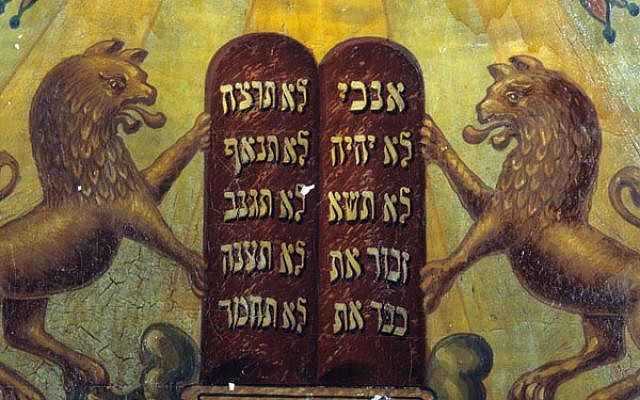 Illustrative: In this 1986 photo, the Ten Commandments are flanked by two lions. (courtesy, via The Times of Israel)

There are myths and concepts in the Jewish world that only as I grew older did I discover that they have little basis. Over the years, I have stopped feeding the birds on Shabbat Shira, throwing bread into the water at Tashlich and baking “key” challah after Pesach. One such seemingly accepted truism was the shape of the Luchot — the Tablets on which the Ten Commandments were engraved. In the synagogues of my youth, the representations of the Luchot were invariably rounded at the top, with the first words of five commandments on one side and five on the second.

Let’s begin with the shape: There is no source in the Jewish tradition for the depiction of the Tablets with rounded tops. Historians claim that this image crept in from Christian Renaissance art. During that period, Jewish books were frequently illuminated by non-Jews, leading to the wide proliferation of the arch top image, still depicted this way today in many Jewish institutions and synagogues .

The Talmud in Baba Batra 14a describes the Luchot as rectangular and parallelepiped (cuboids), with no superior arc. They each measured 6 tefachim [approx. 24in./60 cm.] high by 6 tefachim wide and 3 tefachim [12 in./30cm.] thick, filling the entire cavity of the aron, the box in which they were kept.

Early sources (Mechilta, Philo, Josephus, Rashi and Ramban) claim that each tablet contained five commandments. This division corresponds to two arms with five fingers attached to each hand. This division appears logical, as the first five commandments differ from the last five commandments. God’s name and laws between man and God appear in the first five, while the last five contain no mention of His name and are limited to laws between man and his fellow man. Having both categories on the Tablets stresses that our service to God and appropriate interpersonal behavior are of equal significance.

Of course, the commandment “Honor your father and your mother” poses a challenge, however, in that it appears among the commandments that are associated between God and man — when one might think that honoring one’s parents is purely about human relationships.The lesson to be inferred from this placement is that honoring one’s parents is akin to honoring God, who is also a partner in man’s creation.

Rabbenu Bachya takes a different approach. He explains that one tablet represents the attribute of compassion and the second, the attribute of justice. Yet another interpretation is found in Pesikta Rabbati, which points out the first five are directed specifically to the Jewish people, while the second group is universal.

The two Tablets have interrelated ideas which parallel each other:

While these several understandings may be compelling reasons to divide the Ten Commandments in this fashion (it is the traditional division, certainly), we are left with a significant aesthetic problem. For, as much as the 10 are divided evenly, with five commandments on each tablet, the word and letter count by this division is way off — the Tablets are not balanced: the first Tablet has 144 words and 1,010 letters, as compared to 26 words and 161 letters on the second. If this division is accurate, and the commandments were actually divided this way on the Tablets, then the engravings were drastically lopsided!

What if three of the commandments were written on the first Tablet and seven were written on the second one? Yair Tiktin and Yehudah Koren suggest that this was the case. That would mean 75 words and 517 letters on the first tablet and 93 words and 654 letters on the second — not even, but still a much more symmetrical division than the five-five division, as based on letters and words.

In terms of meaning, this division is defensible. The first three commandments are also the ones that are mostly spiritual in nature, teaching fundamental issues of belief. The last seven are more practical, with emphasis on action rather than philosophy. Along these lines, Kabbalah also divides the 10 Sefirot of God that function in this world as three higher sefirot that existed before creation and seven lower ones, which similarly correlate to the seven days of creation.

Yet a third possibility for the division of the Ten Commandments across the Tablets was advanced in the Mechilta of Rabbi Yishmael. Namely, that each Tablet contained all 10 of the commandments. This also is the opinion of Rav Nehemiah. This approach allows for two different versions of the commandments to be engraved in the stone, as there are slight differences in the two biblical accounts of this text, as recorded in Parshat Yitro and our parsha, Ve’etchanan. This is the opinion of R. Saadiah Gaon as quoted by the medieval exegete, Ibn Ezra.

Moreover, based on research conducted on Ancient Near East documents, Dr. Meshulam Margolit suggests this understanding — that each of the Tablet contained all 10 of the commandments. Archaeological discoveries revealed that when a “brit,” a covenant, was made between two parties, each of them received a copy of the agreement. Identical ancient documents have been unearthed, for example, of a pact made between countries, indicating that each country kept a copy of the agreement.

Next time when sitting in the synagogue during services — may that be our norm again soon! — gazing at the images of the Ten Commandments on the Tablets displayed on top of the Aron Kodesh, the holy ark in the synagogue, recognize that the depiction that you are looking at may not be entirely an accurate one. As for the lions holding up the Luchot… that requires an altogether different investigation!