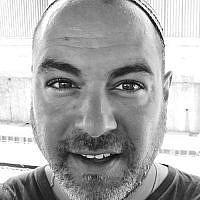 The Blogs
Michael Sahno
Bringing Israel to the World
Apply for a Blog
Advertisement
Please note that the posts on The Blogs are contributed by third parties. The opinions, facts and any media content in them are presented solely by the authors, and neither The Times of Israel nor its partners assume any responsibility for them. Please contact us in case of abuse. In case of abuse,
Report this post.

First off, this is not a shameless plug. This folks, is an explanation. Over the past few articles I have alluded to why I am doing what I am currently doing. I have told you about my love for the State of Israel and about some of the reasons for how these feelings for this little patch of land and the people who populate it developed.

Feelings are great. They are an incredible motivator. They are the primordial element that energizes us to take bold action. Without emotion Herzl would never have spent his life working on a pathway toward his Zionist mission, to establish the World Jewish Congress. Emotion is what led Ben Gurion to leave his family in Płońsk and make his way toward Ottoman Palestine and to, years later, declare Israel’s independence as its first Prime Minister. This same thing, emotion, is what prompted Moshe Dayan to enter Syria to fight the Nazi-allied Vichy French and to lose his eye in that engagement, but never his resolve at keeping his home safe.

Wow, these are big shoes to fill. And I have chosen to try them on. No, not to see if they fit, but to see if I am capable of lifting their weight. All of these people were individuals who had given everything that they could to a place that they considered special. A place that was dear to them and to their hearts. How can I give any less? Well, bottom line is that I can’t. And here is what I have decided to do about it.

I have been working on this for three years, since I was in college in 2016. Since I first went to Israel and was overwhelmed by the tremendous impact that this place had on me from the moment I saw the coastline outside of my plane’s window (you know the feeling). It started by creating a half-hour video in a travel show style called “12 Cities in Israel” about the City of Be’er Sheva. It continued with me filming “12 Cities in Israel” travel vlogs where I gave tips on where to go and what to see when you were in Israel. I was trying to get my word out, but I just wasn’t reaching through the white noise of YouTube. Past the litany of “Hey we visited Tel Aviv”, “Hey, we spent the day in Jerusalem” or the multitude of “Israel is just really bad” videos.

There are tens of thousands of podcasts. All of them on numerous different subjects. There are also a number on Israel, but again, none of them are broadly about the subject, they all seem to be focused on politics, or religion or on specific issues versus being informative to those whose know nothing about Israel and its population.

So, last spring, I decided that this was the space that I was going to occupy in the podcasting universe. I was just going to talk about Israel. I have to say, I was excited, but I was also terrified. What if nobody listened? What if nobody cared? Well, I am happy to say people DID care. People listened to my podcast. I almost couldn’t believe it. Every month we beat our previous month’s totals. You know what this means, right? This means that there is a world out there that wants to hear about something OTHER than religion and politics when they’re thinking and talking about Israel. That’s what I do. That’s what I give them. AND THEY LOVE IT.

This is my mission and it is only going to get better. Do you remember in college how your paper had to have three sources to be accepted? I’m going to apply that to my show. With only me talking about how great Israel is, I am technically nothing more than a one-source paper. In order to solve that, I am going to Israel in February to interview twenty-four people from across Israeli society. I am going to give the world Israel from the Israeli perspective. It won’t be left or right, or religious or secular. It will be all of them.

We’re going to speak with retired general Doron Almog from the special needs organization ALEH, Rivka Carmi the former president of Ben Gurion University, Knesset Member Stav Shafir, journalist and former Spokesman for the Prime Minister’s Office Daniel Seaman, Yishai Fleisher the Spokesman for the Jewish Community in Hebron, musician and vocalist Tomer Yosef from Balkan Beat Box, Tel A DJ Aviel Brandt, Corey Gil-Shuster, from the Ask an Israeli/Ask a Palestinian Project, Sarah Tuttle-Singer and Shoshana Keats-Jaskoll, my fellow bloggers from the Times of Israel, ILTV Host Emanuelle Kadosh and many, many others including a professional dancer and ballerina who uses dance to bring Arabs and Israelis closer together and an artist who uses her craft to educate both children and her community. We are bringing the best of Israel’s academic, political and entertainment world to everyone.

In the beginning I mentioned Herzl, Ben Gurion and Dayan. I mentioned that they had big shoes to fill. Well, I’m here to tell you that I’m going to try to put them on. I also hope that come along with me. Trust me, it’s going to be fun and I guarantee that we’ll both learn a thing or two.

About the Author
With my microphone and my camera, I, Michael Sahno, the host of the "12 Cities in Israel" Podcast & Travel Show want to show you the Culture, the Food and the People of Israel. So, get ready and join me on a journey to explore every corner of this big, little country.
Comments