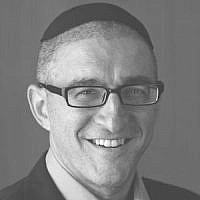 The Blogs
Pesach Wolicki
Apply for a Blog
Please note that the posts on The Blogs are contributed by third parties. The opinions, facts and any media content in them are presented solely by the authors, and neither The Times of Israel nor its partners assume any responsibility for them. Please contact us in case of abuse. In case of abuse,
Report this post.

Imagine that you are given the following assignment. You are to write an encyclopedia entry for the word “Jews.” Your entry may not exceed 150 words. Naturally, you will give the reader only the most basic information that most accurately describes Jews. The 150 word limit prevents you from including non-essential facts or obscure details.

In the year 1771 the first edition of the Encyclopedia Britannica was published in Edinburgh, Scotland. Below is the complete text of the entry for the word “Jews.” It appears on page 833 of volume 2. (The entire encyclopedia consisted of three volumes.)

“Jews: Those who profess obedience to the laws and religion of Moses. When a modern Jew builds an house he must leave part of it unfinished in remembrance that the Temple and Jerusalem now lie desolate. They lay great stress upon frequent washings. They abstain from meat prohibited by Levitical Law; for which reason whatever they eat must be dressed by Jews and after a manner peculiar to themselves. Every Jew is obliged to marry, and a man who lives to twenty unmarried, is accounted as actually living in sin. The Jews, it is said, were formerly at the disposal of the Chief Lord where they lived and likewise all their goods. A Jew may be a witness by our law being sworn on the Old Testament and taking oaths to the government.”

The last two sentences deal with the status of Jews in British law at that time.

The first sentence is a general statement of what Jews are. Following this statement are four examples of Jewish practice. The list includes Kashruth – the kosher laws – , “frequent washings” which may be reference to the laws of family purity and the presence of a mikvah – ritual bath house – in every Jewish community. Alternatively, it may refer to the requirements to wash hands before eating and praying. The reference to marriage displays the importance of family building in Judaism.

Each of these practices is certainly a component of Jewish life that would be readily visible to anyone who is the least bit familiar with Jews.

The first item in the list is the most striking.

“When a modern Jew builds an house he must leave part of it unfinished in remembrance that the Temple and Jerusalem now lie desolate.”

This practice is, in fact, codified in Jewish law. Despite the fact that this is a codified Jewish obligation, it is certainly strange to see it in this short list. It is even more peculiar that it is the first item in the list. Regardless of the degree of relative importance that this law may have in Jewish life, we must appreciate the implication of its place in this Encyclopedia Britannica entry.

The British scholars and academics who wrote this encyclopedia in the 18th century described what they saw as the basic defining characteristics of Jews. The very first item on their list – after stating that Jews adhere to the Torah – was the fact that Jews are mourners for the Temple and Jerusalem. Their homes remain unfinished because their “home” is not built. 1700 years after the burning of the Temple and Jerusalem, a non-Jew who interacted with Jews recognized this fact as a primary component of Jewish identity.

This Tisha B’Av – the anniversary of the destruction – we must ask ourselves? What defines us as Jews? Do we share the hopes and dreams of those who came before us? How will our encyclopedia entry look in 200 years?

About the Author
Rabbi Pesach Wolicki is Associate Director and Lecturer at the Center for Jewish Christian Understanding and Cooperation in Efrat. Previously, he served as Rosh Yeshiva of Yeshivat Yesodei HaTorah. He resides with his wife and eight children in Bet Shemesh.
Comments