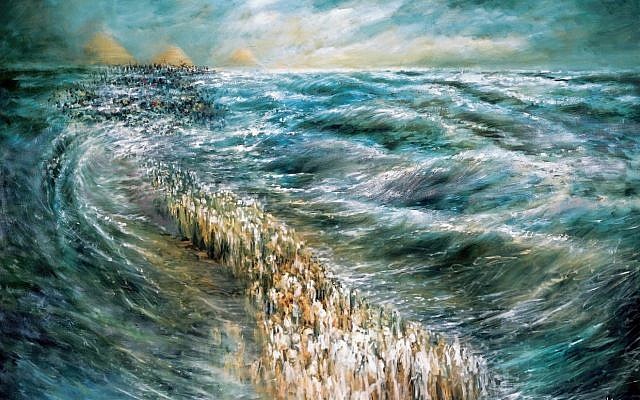 The Splitting of the Red Sea, by Lidia Kozenitzky. (Wikimedia Commons)

The poem “Zevach Pesach” is recited in the Ashkenazi version of the Passover haggadah at the beginning of the “Nirtzah” section, the songs at the end of the seder. This poem lists the historical events that occurred on the auspicious date of the 15th of the Hebrew month of Nisan.

The boldness of Your strong deeds did you wondrously show at Pesach; at the head of all the holidays did You raise Pesach; You revealed to the Ezrachite [Abraham], midnight of the night of Pesach. ‘And you shall say, “It is the Pesach sacrifice.”’

Upon his doors did You knock at the heat of the day on Pesach [Genesis 18:1]; he sustained shining ones [angels] with cakes of matzah on Pesach; and to the cattle he ran, in commemoration of the bull that was set up for Pesach. ‘And you shall say, “It is the Pesach sacrifice.”’

The Sodomites caused Him indignation and He set them on fire on Pesach; Lot was rescued from them and matzot did he bake at the end of Pesach; He swept the land of Mof and Nof [cities in Egypt] on Pesach. ‘And you shall say, “It is the Pesach sacrifice.”’

According to the author of the poem, it appears that the story of the angels’ visit to the home of the recuperating Abraham followed by the destruction of Sodom occurred on the first night of Pesach — the 15th of Nisan.

While Moses’ name nearly doesn’t make an appearance in the Haggadah (just the once, in a cited verse), Abraham’s warrants several mentions. The “Maggid” section starts with a description of Abraham’s family history: how God chose him from the “other side of the river” and led him to Canaan and blessed him.

What makes Abraham especially relevant to the Exodus narrative is the prophecy he received which predicted the bondage of his descendants in a foreign land for 400 years and their ultimate redemption accompanied with great wealth.

The message and relationship between Abraham, Pesach, and Sodom becomes clear when viewed through the lens of the verses from the “Zevach Pesach” poem.

It can be inferred from the poem that Abraham performed his mitzvah brit milah (circumcision) three days before Pesach (anything to avoid Pesach cleaning!). The midrash explains that God had made the weather unnaturally hot to prevent travelers from disturbing the recovering Abraham. His only potential guests were angels in the guise of humans, who were sent to cure him, inform him about the upcoming birth of a son, and destroy Sodom. Abraham, pleased to be able to be hospitable, excitedly invites them into his tent, first requiring them to wash the dust off their feet, to remove the possibility of their participation in an ancient idolatrous ceremony honoring, literally, the dust from their feet. Abraham’s hospitality may therefore be regarded as directly related to his lifelong monotheistic outreach program, teaching the world to recognize the one, true God.

On the first night of Pesach, these angel guests inform Abraham of the miraculous impending birth of his child. He could then presume that the future of a nation whose destiny was to bring mankind to the acceptance of God and the ultimate redemption was assured.

The connection between circumcision and Pesach is not arbitrary. They are the only two positive commandments for which one receives the punishment of karet (a cutting off), if one left them unfulfilled. We also find Elijah the Prophet “present” at both the ceremony of the brit milah (according to tradition, Elijah attends every one) and at the Passover seder (when the door is opened late in the seder to allow him to enter), with the first celebrating one’s personal covenant with God, and the second the national covenant.

Moreover, according to the Midrash, God presented Israel with the commandments of circumcision and the Korban Pesach (sacrifice) because in fulfilling these two requirements, they would become exodus-worthy, as it says in the Haggadah “I said to you, ‘With your blood, live,’ and I said to you, ‘With your blood, live.’” The Jews had been so deeply mired in the immorality of Egypt that they were thoroughly undeserving of redemption without the gift of these commandments. Note also that an uncircumcised male cannot partake of the Pesach offering.

Continuing the story of Abraham, two of the angels go on to Sodom, one to save the patriarch’s nephew Lot and his family, and the other to destroy the city. Lot maintained some of the lessons he learned from his uncle, and invited the foreign travelers into his home. He even seems to have served them matzah! This meritorious act proved crucial in Lot’s deserving to be saved. When the neighbors discovered that visitors had arrived, they surrounded his house and demanded that Lot surrender them to be prosecuted – home hospitality was against the law there. Lot left the security of his home in a vain attempt to rescue his guests by offering his daughter in their place. While his intentions might have been worthy, certainly his methodology is highly questionable. To save Lot, explains the midrash, the angels smote the attackers with blindness. And Lot ultimately overcame his reluctance to leave his adopted society, was hurried along by the angels, and was commanded not to look back. Interestingly, Lot referred to himself as a servant and a slave, hinting to the escaping Israelites in Egypt.

Indeed, many of these narrative elements appear again in the Egyptian redemption. The unworthy Israelites were saved after performing meritorious acts. In the Exodus, safety was within the house and the Angel of Death lurked outside. The midrash again finds blindness as a punishment – this time, for the attacking Egyptians. In both Sodom and Egypt, the devastation and destruction continued throughout the night. And like Lot, the Israelites left in haste, commanded never to return.

Lot might have been physically saved, but emotionally he became a broken man who finds himself in a cave with his two daughters, and ends up being seduced by them. Like their father, Lot’s daughters may have had good intentions – they believed the three of them to be the last people on earth, and set out to perpetuate humanity. They succeeded, but their means were certainly questionable.

What allowed Abraham to succeed where Lot did not? When Lot left Abraham, the void of his influence was filled with Sodom. Abraham did not allow foreign ideologies to cross his threshold and he expelled any that were at risk of doing so. Yet Abraham’s own nephew became part of Sodom and its decadent, perverse culture.

The Exodus from Egypt refers to not only the physical departure from Egypt, but also to taking the gods of that land and slaughtering them. But in ridding themselves of the Egyptian pantheon, the Israelites need to fill the void — humanity, it would seem, hates a vacuum. Fortunately, they fill it with God.

As we mark this year’s Pesach, we may reflect on the call of hospitality with which we open the seder – mirroring the hospitality of Abraham, and even of Lot. We may view the chametz (leavening) that we have just removed from our homes as representing the negative and corrupting influences may, on occasion, find their way into our homes – and make every effort to rid ourselves of them as well. The song at the end of the seder is timely in this regard, reminding us to take Abraham as a model. Our freedom that Pesach celebrates goes beyond leaving the slavery of Egypt in our wake; rather, we look to the patriarch and don the yoke of freedom to turn to God, as he did.