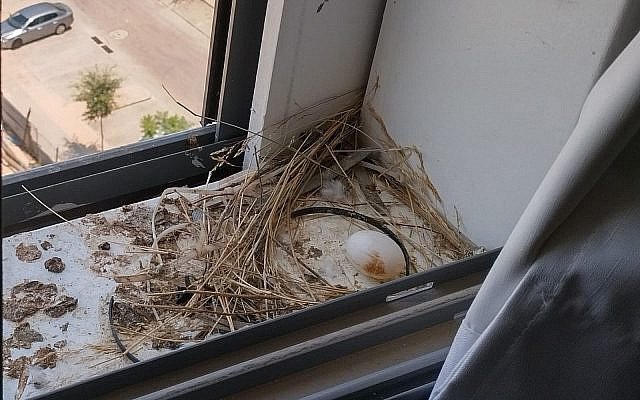 Egg on our Windowsill, Photo by Mark Nadel

A dove built its nest on the windowsill of my safe room out of discarded plastic garbage ties, random twigs and three stalks of wild wheat.  The egg was smaller than the size of my palm and it was perched precariously on the narrow sill of our eighth-floor apartment.

My husband considered sending away the mother bird from its egg – a deed which is supposed to engender a long life but I wouldn’t let him. A bird had chosen our home as a safe haven and I felt honored and obliged by its choice. Over the next few days, he too was pulled into the natural drama playing out just outside our window pane.  We would take turns glancing through the curtain to observe parent and future child. We were careful not to cast too big a shadow because any movement seemed to cause the bird to fly away.

At times, it seemed that two birds were protecting this miniscule gem and we wondered why. We were told that, in fact, what we saw was the case. Doves are monogamous and the father and mother both take care of the egg.  They take turns at specified times of the day to sit on the egg – consistently returning to the nest to protect the egg from harm.

Everyone who came into our apartment checked out our nest and everyone who saw our little egg became its protector.

This morning, I noticed both the birds and the egg were gone. I worried about what had happened to our natural treasure.  I then noticed that the egg had fallen between the window and the sill into a small crevice, but it was still intact.  My husband and I debated what to do – I had heard that when a bird sensed that someone had touched their egg, they would abandon it.  But if we left the egg in the small, dark, crack we would for sure be deciding this little bird’s future.

We also felt responsible. Maybe it had been some move that we had made that had startled one of the birds and caused them to knock the egg into the crevice. We imagined that its parents were frantically searching for the fallen egg or devastated by their inability to pull the egg to safety.

We weighed the odds and decided that the best option was to move the egg back to its perch where at least it would have a hope of its parents’ return. My husband gingerly placed the egg back in its nest and we waited and hoped for reunion.

I was relieved to see that the birds did return. Unfortunately, within the next few hours the egg and its parents disappeared. We again checked our narrow sill. Had the egg once again fallen? I ran to my computer to see if doves have the ability to move their eggs from nest to nest. My husband independently ran to do the same.

We had both become so attached to this dynamic portrait of future life. To our relief, we learned that doves have the ability to move their eggs from nest to nest and often do. They poke a little hole into the egg allowing a bit of the yolk to harden and then they grab the protrusion and carry the egg to a new location.  With our bit of research, we realized that our sill was probably our egg’s first home. We hoped that it was not its last and that now it had been carried to someone else’s sill, sheltered and safe and waiting to be born.

Why do I tell you this story – because it begs to be allegorized.

Is it symbolic of the ubiquitous Israeli graduation song, Uf Gozal  (Fly Away Fledgling) written by Arik Einstein that my husband likes to sing when we sit around the Sabbath table without our children?  The song is an ode to transition that captures our mixed emotions as our children leave home:

“My chicks have left the nest, spread wings and flew…I always knew that this day will come, when we need to say goodbye… Fly, my chick, cut the sky, fly to anywhere you want to, but don’t forget, there’s an eagle in the sky, Fly away.”(Uf Gozal)

Maybe our attachment to this egg, that found its way to our nest, was emblematic of our pull to protect and buffer our children as they move onward to spread their wings.

Or is the analogy more national in scope – a pointed reminder as we enter into the Three Weeks between the 17th of Tammuz and Tisha B’Av of the complexity of Israel’s relationship to G-d – a symbol of our historic wanderings from nest to nest seeking solace and safe haven?

Maybe it was representative of a yearning captured by two of our national poets who shared the desire to find serenity in the permanence of home and recognized the turbulence of the journey to get there.

In Psalm 84, King David searches for home and laments:

“Even the sparrow has found a home, and the swallow a nest for herself in which to set her young, near Your altar, O LORD of hosts, my king and my God” (Psalm 84:5)

Two millennium later a young H.N. Bialik perched in exile and witnessing the nascent hope of a return to Zion, in his poem, To the Bird, encourages his bird to fly away from its home:

“To the Bird: What shall I tell you, good bird?… Fly, my bird, to your mountain, your desert.   You are happy for you have left my tent.  Were you to live with me, O wing of song, you too would cry bitter tears at my fate…” (To the Bird)

Bialik recognizes that change of habitat does not necessarily mean change of fortune,  yet he hopes it will:

“Now the tears and the bruises have stopped, but the end of my sorrow has not yet come. Greetings my dear bird upon your return. Oh, please cry aloud for joy!” (To the Bird)

And so it is with the egg that was on my windowsill on the eighth floor of my apartment in Israel.   It takes fourteen days for a dove’s egg to gestate.  If  it had remained on my sill for that time, it probably would not have survived.  It had to be moved.  But to invest in the journey, its parents had to be convinced of its viability.  I would like to think that they were.

And I hope, that one day that bird which began its life on my windowsill in a nest made of plastic garbage ties and fragile twigs will spread its wings and return from the places it has been, resilient and strong from the challenges of its travels –  happy to return home.

“Greeting my dear bird upon your return. Oh, please cry aloud for joy.” (To the Bird)

For that is what I want for my children and my Nation.

About the Author
Ariella Nadel has been a TaNakh teacher and community educator for the past twenty-five years. Until making Aliya this past summer to Modi’in, she was a TaNakh teacher at Yeshivat Akiva/Farber Hebrew Day School in Southfield, Michigan. She currently teaches at several Midrashot in Israel and is an adult educator for JLearn of Metropolitan Detroit. Ariella Nadel has a pedagogue degree from Michlala College for Women and holds degrees in Judaic Studies and Political Science from Yeshiva University and a law degree from the Benjamin N. Cardozo School of Law.
Related Topics
Related Posts