The Blogs
Effie Kleinberg
Apply for a Blog
Advertisement
Please note that the posts on The Blogs are contributed by third parties. The opinions, facts and any media content in them are presented solely by the authors, and neither The Times of Israel nor its partners assume any responsibility for them. Please contact us in case of abuse. In case of abuse,
Report this post. 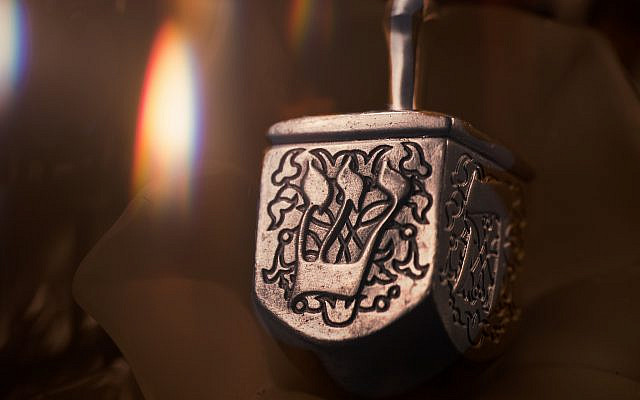 Last week, my son came home from a birthday party with a “loot bag”. Inside were a few dreidels (in Hebrew sevivon) to spin in anticipation of the upcoming holiday of Chanuka. I took one of the dreidels in my hand and ran my fingers over the traditional dreidel letters: “nun”, “gimmel”, “hey”, and then to my surprise, the final letter “pey”?! I said to my son, “where’s the letter “shin”?” Before he could respond, I realized the silliness of my question! Of course! We live in Israel; the “pey” on the dreidel stands for po, as in: nes gadol haya po- A great miracle happened here. I grew up with a “shin” instead of a “pey” which alters the dreidel acronym to read: nes gadol haya sham– A great miracle happened there.

(fyi- when you Google the word “dreidel“, you are presented with a cute spinning dreidel game on your screen. If your location is Israel, the dreidel displays a “pey” instead of a “shin”, and any country outside of Israel displays a “shin” instead of a “pey”. Kudos to Google on this one!)

We made aliyah close to a year and a half ago, and I knew there would be days when the cultural and Jewish experience of my children growing up in Israel would be quite different than my own upbringing in Canada. The Hebrew letters on the dreidel being just one example, I was granted a beautiful reminder of the incredible opportunity my family has to celebrate Chanuka only a few kilometers away from the the battlefield upon which the great military victory of the Maccabees was achieved and the re-dedication of the Temple occurred.

Pause for a moment and consider what the dreidel is telling us. Whether you come to Chanuka (geographically speaking) from po or sham, a great miracle happened, but which miracle are we meant to be focusing on?

Two Rabbinic texts reveal diverging paths as to the origins of the Chanuka miracle: the al hanissim prayer which is addended to the standard texts of both the silent Amidah and the Birkat Hamazon post-meal prayer throughout the days of Chanuka emphasizes the military victory of the Hasmonean-Maccabees over the Greek army without a single reference to the miracle of the oil:

The other Rabbinic text that discusses the origins of Chanuka is found in a brief Talmudic passage known as “mai chanuka” (Talmud Bavli, Shabbat 21b). Notice the emphasis on the miracle of the oil with only a small reference to the military victory:

What is Hanukkah, and why are lights kindled on Hanukkah? The Sages taught: On the twenty-fifth of Kislev, the days of Hanukkah are eight… What is the reason? When the Greeks entered the Sanctuary they defiled all the oils that were in the Sanctuary by touching them. And when the Hasmonean monarchy overcame them and emerged victorious over them, they searched and found only one cruse of oil that was placed with the seal of the High Priest, undisturbed by the Greeks. And there was sufficient oil there to light the candelabrum for only one day. A miracle occurred and they lit the candelabrum from it eight days. The next year the Sages instituted those days and made them holidays with recitation of hallel and special thanksgiving in prayer and blessings.

Curious indeed; perhaps these two Rabbinic texts are meant to complement one another and therefore when we pray, we are meant to focus on the military victory and God’s role in our salvation, whilst when we study, the miracle of the oil is given center stage; each miracle being given its own narrative and standalone text.

If so, is the dreidel telling us to focus on the miracle of the oil, the military victory, or both? Hard to know for certain, but perhaps the dreidel is part of our Chanuka celebration for a different reason altogether. What if the dreidel is there to challenge us with a much greater task: that is to bear witness in each generation to the miracle of our people’s history. In the narrow sense, we recall both origins of the Chanuka holiday, but through engaging in the lighting of the Chanuka candles and the spinning of the dreidel, we are brought on to recall not only the military victory and the oil, but our very survival in each generation, on a personal, communal and national scale- the miracle of the eternal flame that is Jewish existence- bayamim hahem bazman hazeh!