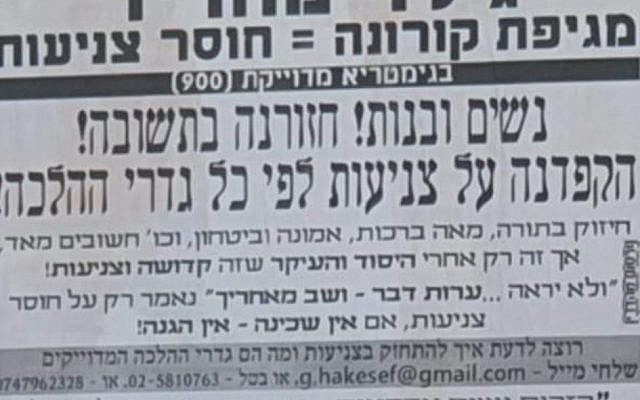 A poster in Bnei Brak calls on women to improve modesty in the name of ending the Coronavirus.

COVID-19, the illness caused by the coronavirus, is devastating ultra-Orthodox communities in the US and Israel.

Much of this has to do with the timing of the disease so close to Purim, a holiday where families and communities come together to eat, drink, give gifts to one another, and congregate to hear the reading of Megillat Esther.

In the US, ultra-Orthodox communities fought the idea of shuttering institutions, schools, and men’s mikvaot, and precious days went by until a call from the White House to community leaders finally got them to (mostly) listen. Still, some signs on shuls in English read “closed,” while in Yiddish, they said, “Come around the back.” Men’s mikvehs stayed open and 770, Chabad’s massive HQ, didn’t close until the night of the 17th — a full week after Purim.

In Israel, yeshivot flouted the rules and remained open, despite government orders. Currently, a full 50 percent of those in Israeli hospitals for COVID-19 are Haredi (ultra-Orthodox), though that demographic is less than 20% of the population.

For weeks, there has been an ever tightening general quarantine. Now, people are restricted to staying within 100 meters (328 ft.) of their homes, unless going out to buy food or medicine.

Rav Chaim Kanievsky did not call on men to not go to minyan until footage of a funeral in Bnei Brak with hundreds in attendance was aired Monday, enraging the country. A Haredi woman on lockdown with her two little children shared a video of the funeral saying, “Please don’t think this is most of us. We are the ones who suffer most when people don’t follow the rules.”

How true. How devastatingly true.

It is easy to empathize with large, poor families in cramped spaces, with few opportunities to air out. And we should! It is hard to imagine what they are going through right now. But one wonders whether the restrictions on taking a walk around the neighborhood with your child would be so severe if the rule-breakers hadn’t acted so outrageously to begin with.

And then there are, of course, the women. They who stay at home with said children… and they who are blamed for the entire thing.

The mashgiach, Reb Matisyahu, shlita, urges the women of Lakewood in light of the current matzav (situation) to take upon themselves to upgrade their sheitels (wigs)… This includes not wearing a sheitel that is longer than shoulder length. Hashem is sending us an unprecedented and powerful message, our response must be unprecedented and powerful. Any woman who takes upon herself to cut or otherwise fix her sheitel as soon as she can, can leave her name and will be blessed by the mashgiach with shmira – (being guarded).”  – a voice note circulating on WhatsApp

Terrifying discovery. Plague of Corona = lack of tzniut. In exact gematria (900) Women and girls! Do tshuva! Please be strict with modesty according to all of the boundaries of halacha.” — posters plastered all over Bnei Brak, city of nearly 200,000 ultra-Orthodox

When klal Yisroel finds itself in a time of suffering, it’s a sign from Hashem that we need to examine our ways, because He doesn’t send ills without sins to warrant it. And I want to specifically talk to women about tznius…if we will change this, Hashem will be able to come back and dwell among us and will cure us from all sickness. If only we dress according to tradition: shaved heads, short sheitel, fully covered with a hat, no makeup, long sleeves.”–Satmar Rebbe of Kiryas Joel 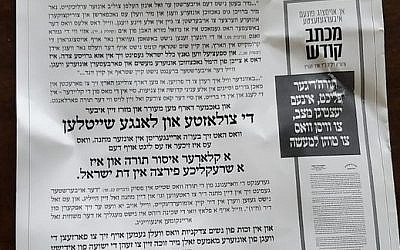 The quotes above are from WhatsApp messages and posters, printed in English, Hebrew, and Yiddish, all blaming women’s modesty and wigs for the coronavirus illness.

When I asked Esty Shushan, a Haredi activist for women’s rights and representation, for her thoughts on blaming women for the illness, she said that at this time, her organization is too busy dealing with a rise in domestic abuse in the community, due to the quarantine and stress, to reflect on this approach.

Another activist, and former resident of Kiryat Joel, Frimet Goldberger, posted this in response to the Satmar Rebbe’s proclamation:

This is a call from the Satmar Rabbi in my hometown asking women to examine their clothing—already uber modest. He’s decrying long wigs and suggesting that the women who don them are responsible for this current pandemic. Women who are home tending to 8, 10 or more children have somehow brought this on themselves and the rest of the world. Women who have nothing else to give; they’re already shaving their heads lest a stray hair arouses another man; they wear thick stockings and closed necklines, long sleeves and skirts covering four inches below their knees. Has it ever occurred to you, rabbis, that you and your infighting might require introspection?”

The women in these communities shoulder most of the burden for their families’ welfare and, now shoulder all of the blame for their illness.

The fact is that the crisis in this community was directly exacerbated by men attending yeshiva, mikveh, and minyan, despite government calls to stay home — home where mothers have been shuttered with children for weeks. Because their leaders failed utterly to be responsible and close down.

How is it possible that the only “introspection” this failed leadership calls for is to place blame on the heads and shoulders of women? When something goes wrong in the world or community and your reaction to it is to blame women, what really do you worship or value?

Where are the WhatsApp messages calling on men to free their wives from dead marriages, so we can be freed of corona?

Where are the posters calling on all abusers to stop abusing, and for rabbis to stop protecting them, to end the plague?

Where are the calls to repent for the lack of  responsibility and shut down every last mikveh and shul?

That it is somehow always women to blame for every ill that befalls humanity…is not Judaism. It is something dark and foreign. Something that appears across every culture, in every era, that never ends well for the societies that allow it.

Until it ends, we refuse to be quiet, or invisible.