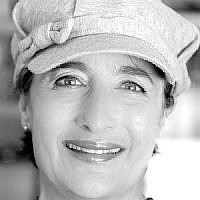 The Blogs
Sarina Lemkus Kopinsky
Apply for a Blog
Please note that the posts on The Blogs are contributed by third parties. The opinions, facts and any media content in them are presented solely by the authors, and neither The Times of Israel nor its partners assume any responsibility for them. Please contact us in case of abuse. In case of abuse,
Report this post.

In 1967: Fifty years ago – Israel’s many powerful, wealthy enemies, including all of her Arab neighbors, with financial and military support from USSR, collaborated to assemble on her “1967 borders” with the evil goal of, God forbid, conquering Israel completely in a war that Israel did NOT cause or want or ask for.

God did forbid, and oops, within just one week, little Israel the Victim managed to survive (that is to say, win) the Six Day War.

Israel overcame the Law of Probability [see note 1 below], relying on miracles; the amazing IDF; a defense budget, for actual defense, that was a whopping 14% of GDP; passionate love of and commitment to the Holy Land; and a secret weapon called “Ein Bereirah,” an insistence that Surviving Is the Only Option.

Israel not only repelled her enemies that week, but even managed to chase them a few miles beyond the borders. These few miles, such narrow margins [see note 2], are the so-called “occupied territories” that Israel’s enemies thrust into her hands in June 1967 by initiating ugly, hostile aggression [see note 3].

Israel earned this extra land the hard, hard way, through bloodshed of her precious people who gave life and limb in the Six Day War. Israeli soldiers fought hand to hand, and many died, in the streets of Jerusalem to protect the holy places of all faiths.

And then, Israel did indeed OCCUPY these few miles by really LIVING there, thriving, sparkling, caring for nature, managing water and security, soaking up connections to the biblical history of these places that deeply touched the Jewish national soul, growing infrastructure to benefit all residents of the region, being neighborly with the local Arabs, and building roads, sewers, power lines, schools, parks, hospitals, stores, restaurants, factories, farms and – gasp, even homes [see note 5].

The enemy did not occupy this space when it was under their control. They abused it and left it desolate.

They demolished historic synagogue buildings. Such evil destruction does take some effort. They broke burial tombstones from the Mount of Olives and took them to use for staircases, paving stones, rubble, bathrooms – with Hebrew inscriptions. They deliberately destroyed sacred books, whereas Judaism says to bury holy texts at a cemetery if they break or wear out. They burned Torah scrolls, which are priceless, but cost up to $55K each. True, and disgusting. This crosses the line from “mere” neglect to outright evil abuse and anti-Semitism.

Shame on the Arab nations for initiating hostilities against the tiny State of Israel, Medinat Yisrael, when they were blessed with more land than they knew what to do with, oil wealth, and every resource a nation could need for its citizens to thrive with joy and peace.

Such bad sports Israel has for enemies — running to the UN and main stream media to bear false witness against Israel and to accuse Israel of Bully-Phobia, taking God’s name in vain by calling their unholy embarrassment a Jihad, subjugating their own population by holding them back from normal economic progress and doing so deliberately to score a political point for victimhood, taking advantage of Israeli ethics and menshlichkeit by using schools, hospitals and children as human shields, coveting Israeli land and success but choosing to hate Israel’s vibrant cheerfulness and optimism, violating sanctity in their houses of prayer with poisonous sermons inciting their flock to kidnap, steal, and murder, awarding huge cash prizes for evil acts of terror, teaching bloodshed in schools, kindergartens and summer camps, and dishonoring their fathers and mothers by abusively raising their families to worship death and hatred [note 6].

If you value freedom, equality, diversity and world peace, support Israel with all your brain and heart.

Visit Israel. Learn understand the facts about Israel. Tell the truth about Israel on social media and to your politicians and friends. Compose works of art and music that respect the achievements of Israel. Invest in Israel. Buy Israeli products. Include Israel in your charitable giving. Learn Hebrew (with vowels, at first).

Protect your children from BDS as zealously as you teach them not to run into the street in dangerous traffic. Demand political and personal safety on college campuses.

Eat falafel [see note 7], because eating felafel is actually the favorite occupation of an Israeli. And did you know that Israel has the world’s only kosher Ethiopian restaurant [note 8]? So much for the outright evil lie of so-called apartheid in Israel.

Israel is the most diversity-friendly country in the Middle East and is likely the friendliest, most welcoming country in the whole world. Does any other nation have a Ministry of Absorption?!

1] Israel’s one “illegal” act was defying the law of probability!
2] The “territories” are perhaps smaller than your daily commute to work!
3] Crimea is bigger than the whole of Israel including the “occupied” areas. Russia simply invaded and took control of Crimea in 2015, and yet Crimea does not get listed as OCT (Occupied Crimean Territory). Only Israel, the Jewish state, is in trouble for earning land in a war of self defense that someone else started.
4] Source: JewishVirtualLibrary.org. By comparison, out of an American population of 285 million, almost 3000, or 0.001%, were murdered in the 9/11 attacks of 2001. Do the math to appreciate the impact on Israel of losing 0.028% of its people in the Six Day War. This number measures only those who died, may their memories be blessed, not the thousands whose injuries were extreme indeed!
5] BTW, did you happen notice any construction last time you went ANYwhere? Yeah, that! Israelis also build or remodel homes and neighborhoods. It’s called Living.
6] The very word Hamas means Violence. Violence is their actual goal in life, not a tool to reach a goal.
7] My late father, may his memory be blessed, considered felafel to be Israel’s secret weapon – a delicious national food that not only is vegetarian but also includes plenty of salad along with the protein and carbs.
8] Habash Kosher Ethiopian restaurant, 8 HaNegev St, Tel Aviv. Visit, enjoy and like them on Facebook! www.rol.co.il/sites/habash, 03-516-4264.
And if someone shows the chutzpah to interrupt your meal, touch your thumb and finger together, waggle them in the air, and exclaim, with words or eyebrows, “Rak Rega! A moment!” This hand movement is *really* Israel’s favorite occupation.

About the Author
Sarina Kopinsky, Philadelphia, previously from Colorado and South Africa. Aunt of Dalya Lemkus, z'l, who was murdered in Israel in 2014 by an evil terrorist.
Related Topics
Related Posts
Comments