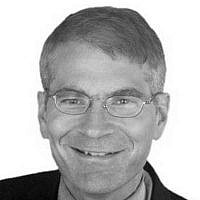 The Blogs
Thomas Kahn
Apply for a Blog
Advertisement
Please note that the posts on The Blogs are contributed by third parties. The opinions, facts and any media content in them are presented solely by the authors, and neither The Times of Israel nor its partners assume any responsibility for them. Please contact us in case of abuse. In case of abuse,
Report this post.

On March 1, Russian missiles hit the Babyn Yar memorial, one of the most haunting symbols of the Holocaust. Babyn Yar is a ravine near Kyiv. At that site in 1941, the Nazis murdered 34,000 Jews over a two-day period, dumping their bodies in the ditch. Just four months ago, I was privileged to be part of a U.S. delegation attending the eightieth anniversary ceremony where the presidents of Germany, Israel and Ukraine inaugurated a huge new memorial complex to remember its victims. It was a long overdue day of relief that the souls of Babyn Yar finally got their fitting remembrance.

So there is poignant symbolism that only four months later, the murderous dictator, Vladimir Putin, would damage this very memorial site by engaging in the type of terror for which the Babyn Yar Memorial was built to protest.

After the bombing, Zelenskyy said, “what is the point of saying ‘never again’ for 80 years, if the world stays silent when a bomb drops on the same site of Babyn Yar. History repeating?” Zelensky is absolutely right.

History compels the Jewish people and the world to take two steps: First, speak out even more loudly to protest the Russian invasion and second, provide greater military and humanitarian assistance to the Ukrainian people. Democratic nations like India and Israel must join in speaking out with greater clarity to protest Russia’s actions. The free world must continue to broadcast that Putin is committing crimes against humanity on a daily basis, tragically reminiscent of World War II fascists: blitzkriegs against civilian centers, use of illegal cluster bombs, and missiles to attack hospitals, orphanages, kindergartens—-even a nuclear reactor. He has already killed countless innocent civilians including children. He’s leveled cities and triggered the largest refugee crisis since WWII.

In just two weeks, more than two million Ukrainians have escaped Ukraine to bordering nations while millions more are displaced inside Ukraine. Thousands of the refugees are Ukrainian Jews. Most of these Jews are Holocaust survivors and their families, after 80 years, now running again from an evil thug. But the scariest part: the worse may still be yet to come. Putin pledges that his war machine will end its carnage only when Putin destroys the rest of Ukraine and claims total victory.

Already the West has imposed unprecedented sanctions and provided large amounts of military and humanitarian assistance. NATO, led by the United States, has sent billions of dollars in Stingers, Javelins and other lethal equipment to arm Ukrainian soldiers. But it’s not enough. We must send additional equipment including old Soviet jet fighters to stop Russian attacks. But the sanctions and military aid have only slowed, not stopped the Putin war machine.

We must do more. Europe should fully join America in ending purchases of Russian energy. The West should block every Russian bank from SWIFT and pressure every foreign company from doing business in Russia. To their credit, some companies like Mobil Exon, Netflix and Mastercard are doing so. McDonald’s, Coca-Cola and Starbucks are also pulling back. But many others continue to profit in Putin’s Russia. And Western leaders must be straight with their voters: these sanctions will cause pain at home with higher prices for consumer products – especially energy – and temporary shortages of some goods. Nations whose doors have been slammed shut to block refugees must open their doors to Ukrainians.

On a humanitarian level, Western nations, along the with United Nations and private groups are helping millions of suffering Ukrainians. And Jewish groups have been especially active. As a people who have been the casualties of hatred and destruction for centuries, Jews feel a special responsibility to help suffering Jewish and non-Jewish Ukrainians. Many American and Israeli groups have stepped to the plate. The Joint Distribution Committee, for one, provides food, medicine and other necessities to Jews and non-Jews in Ukraine, while the Jewish Agency and many private organizations like HIAS are aiding Jewish and non-Jewish refugees who cross the border. In response, Jews around the world are donating generously to the effort. But given the crushing needs, these groups are running out of money and more support is desperately needed.

The war is still relatively new. There remains time to stop Putin from further crushing this democratic nation and its innocent people. But that time is running out. If we fail to meet the challenge, the words, “Never Again” will become another empty slogan.

About the Author
Thomas Kahn teaches in the Government Department at American University where he is a distinguished fellow with the Center for Congressional and Presidential Studies. He serves on the boards of the National Coalition Supporting Eurasian Jewry, Israel Policy Forum, the National Board of Governors of the American Jewish Committee and the Jewish Democratic Council of America. For twenty years, he was the Democratic Staff Director of the U.S. House Budget Committee.
Comments