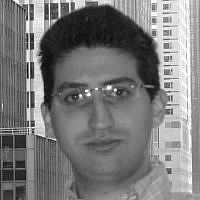 The Blogs
Gilad Rabina
Apply for a Blog
Advertisement
Please note that the posts on The Blogs are contributed by third parties. The opinions, facts and any media content in them are presented solely by the authors, and neither The Times of Israel nor its partners assume any responsibility for them. Please contact us in case of abuse. In case of abuse,
Report this post.

Over the past month every person on earth heard about Hurricane Sandy and the havoc it wreaked through America’s northeast. Not many people however heard about the havoc it caused in Cuba or of the dozens of casualties from the earthquake in Guatemala that accrued just a week afterwards.

That’s understandable. That’s the way the media works, and that’s why it’s not surprising that it wasn’t until Tel Aviv was hit by two missiles fired from Gaza that the international media directed its attention to the dire situation in the Middle East. But if you live in Southern Israel it’s no news.Israel has been under attack for years, but now we are learning that the small peripheral town of Sderot is to Tel Aviv, what Guatemala is to New York City. When the show hits the big stage the cameras follow soon after.

This is the first major Arab-Israeli crisis since I moved to New York, and as a classic Hebrew song says “what you see from there is not what you see from here.” So what does it mean to be an Israeli expat living in New York?

It means getting a call from your mother at an unusual hour, dreading to hear the worst of news, but instead it’s your mom that’s worried about you. “You got a letter from the army reserves, they want you to come in. They’ve been trying to reach you for a few days, I think you should call them.”

It means every sound coming up from the street sounds like the begging of the siren, until you remember that you’re 6,000 miles away.

It’s feeling incredibly helpless and ashamed that there’s not much you can do to help from here. In Israel there’s a sense of unity that’s instilled within you at a young age. Starting to volunteer at emergency services at high school is not uncommon. So you do what you can from 15 to 18 at your local fire department. Then from 18 to 22 you serve in the army, with great pride usually. Then it’s time to go to college, but instead of getting a part time job interning for a bank or a court, building up your resumé, you take a part time job with police station nearest to you. You don’t do it for the salary or for the comfortable hours, you do because if you don’t, that voice in your head telling you it’s the right thing to do would never let you hear the end of it.

And now what? You look for some meaningful way you can help those in need, but realize there’s nothing you can do but share some info graphics on Facebook. My friend tried to explain it to me: “In America we donate. That’s how we help,” she said.

It means that when you’re trying to get some work done at the office, while keeping one eye on the Twitter feed, you can’t comprehend how you hear a woman laughing hysterically next door. You want to go to her office and ask her “how can you laugh at a time like this? Haven’t you heard a home received a direct hit and a family of three was killed just a half hour ago??”

But then you realize she doesn’t care. Chances are she probably can’t point to Israel on the map. You decide to clear your head at the break room for a few minutes, only to find a small gathering is already in place. In Israel, when you see a group of people centering around a TV in a public location it usually means one thing: there was an attack. But when you make your way, you see that they’re not watching the latest news, they’re watching a daytime sitcom. Scheduled programming was not interrupted here.

You realize that Madonna is still going to perform at Madison Square Garden, the Knicks are still going to move up to 6 and 0 and all the schools are going to remain open tomorrow. By the end of the day you realize it’s just another day here. Of course it is. Nothing out of the ordinary happened. You understand the cliché “you can take the person out of Israel, but you can’t take Israel out of the person.”

About the Author
Gilad was an officer in the IDF during the Second Lebanon War and a student at Ben Gurion University of the Negev during operation Cast Lead. He is now a real estate developer based in NYC and Berlin.
Comments